Newswire
US, Japan mull to evacuate citizens from Wuhan 1 hour ago
Forget fads, go for ‘great-granny’s diet’: UK surgeon 2 hours ago
R-Day celebrated in minus 10 degrees in Himachal town 2 hours ago
This skin cream may protect against dengue, zika viruses 2 hours ago
Philander fined, handed demerit point in farewell Test 2 hours ago
Torrential rain claims 30 lives in Brazil (Lead) 2 hours ago
Next
Prev

India is home to world’s 2nd largest internet user base, thanks to Reliance Jio

The entry of Reliance Jio brought revolutionary changes in India’s telecommunication market. The richest and most powerful corporate house of India entered in telecommunication segment in late 2016. The company has been able to capture 30.25 percent of market share as of March 2019 and is the second largest telecom operator in the country after Vodafone Idea Limited. Reliance Jio has been able to almost 30 crore consumers (30.25 percent) and 31.7 percent gross revenue in less than three years.

The entry of Mukesh Ambani-led Jio forced many small players out of business and the merger of Vodafone and Idea, two of the largest independent telecom operators. The data tariff rate in India is the lowest in the world, thanks to Mukesh Ambani. Since his company entered the market with a 1GB free data and unlimited free calling package throughout India, the prices of calling and data services have crashed, the existing players like Vodafone and Jio have been forced to cut the rates in fear of being thrown out of the market. He was being compared to the freebie distributing Chief Ministers of Tamil Nadu but he was doing it with his own money, not the taxpayers’ money. 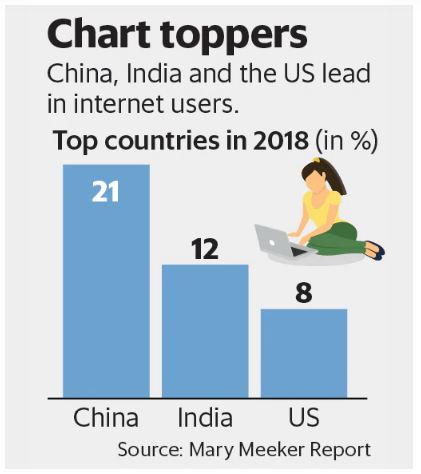 For a more detailed report on digitalization of India under Modi government read ‘Digital India: Technology to transform a connected nation’ by McKinsey & Company.

The massive success of Modi govt’s push for Digital India

The report has some more interesting findings like the amount of time spent on viewing videos doubled in last one year with 1.5 billion active users, concentrated on Youtube, Facebook, Tiktok, and Snapchat. The use of podcast in which audio content is delivered through the internet has doubled in the last four years.

Mukesh Ambani-led Reliance group is known for its aggressive pricing strategies in the market. It was the first company to come up with a plan for free incoming calls in India in the early 2000s when his father, Dhirubhai Ambani was leading the company.

The leadership style of Mukesh Ambani epitomizes the traditional Indian style of running a Hindu undivided family business. He involves himself in every large-scale project and is known for his ability to visualize, conceive and implement mega projects down to the last screw and nail. He is a 24X7 businessman with a low profile and workaholic persona; he hardly interacts with the media except on the company’s annual day functions. He is known to work towards a monopoly in the markets, a style similar to his father’s. In the early days of the business, his father monopolized the thread-making business, and now he is himself doing the same in the telecommunication market. Friends and rivals use two words to describe Mukesh: obsessive and ruthless.

The attack on doctors in West Bengal: A doctor responds to Mamata Banerjee

Radha Mohan Singh might be the next Lok Sabha Speaker