The attack on doctors in West Bengal: A doctor responds to Mamata Banerjee

by Abhilash Kumar Jain
in Trending
0

Pratibaha – This is the name of a young doctor from Nil Ratan Sircar Medical College and Hospital (NSRMC). This name is now a rising cry among Doctors in India both young and old. This young doctor bore the brunt of an attack by a group of people (not a small group in any way, the numbers were reported to be up to around 200 as per some reports). The attackers came in two lorries in in what is being reported as a “fit of rage!” How does one manage to collect over a 100 people, arrange two lorries and attack Doctors on duty in a fit of rage? This is nothing short of a planned attack. This is mob lynching of hapless doctors on duty.

The sheer number of attackers tells us the story of the abject failure of law and order in the state of west Bengal under CM Mamata Banerjee where a doctor performing his duties is likely to be killed save for his own luck. If anyone believes that the police had no clue (despite repeated calls) or idea then it is purely a case of the complete collapse of law and order in the state. Let’s just ponder over these facts for a minute:

Where were they headed?

What was their intention?

These are the questions that the state police should answer and own up their failure in providing protection to doctors discharging their duties. The consoling remark by hon’ble judges “to not feel scared” is, and I am very sorry to say this, pointless and hollow.

The assailants barbarically attacked young Pratibaha Mukherjee with such a brute force that his skull cracked, the boy would most likely have been dead if not for the timely intervention of his fellow doctors. His GCS sank as low as 8/15. He had to be ventilated and underwent a surgical intervention because of the grievous nature of the injury. This is all because the goons are being given a free run in the state of West Bengal.

The cold-hearted CM Mamata Banerjee was recently seen inaugurating a five star hotel in the city and she somehow was not able to find the time to meet the protesting doctors until today.

The machinery had meanwhile already been set into motion to further rub salt in the wounds of doctors by Mr Rajiva Sinha (Addl. Chief Secretary) who put out a press release (No. HS- 34/19) that read “ This is an appeal to the good senses of the agitating junior doctors”, he further lectures the doctors by stating “ health is an emergency service and any disruption in providing this service to the needy is not desirable”. Should it not be perceived as a veiled threat? 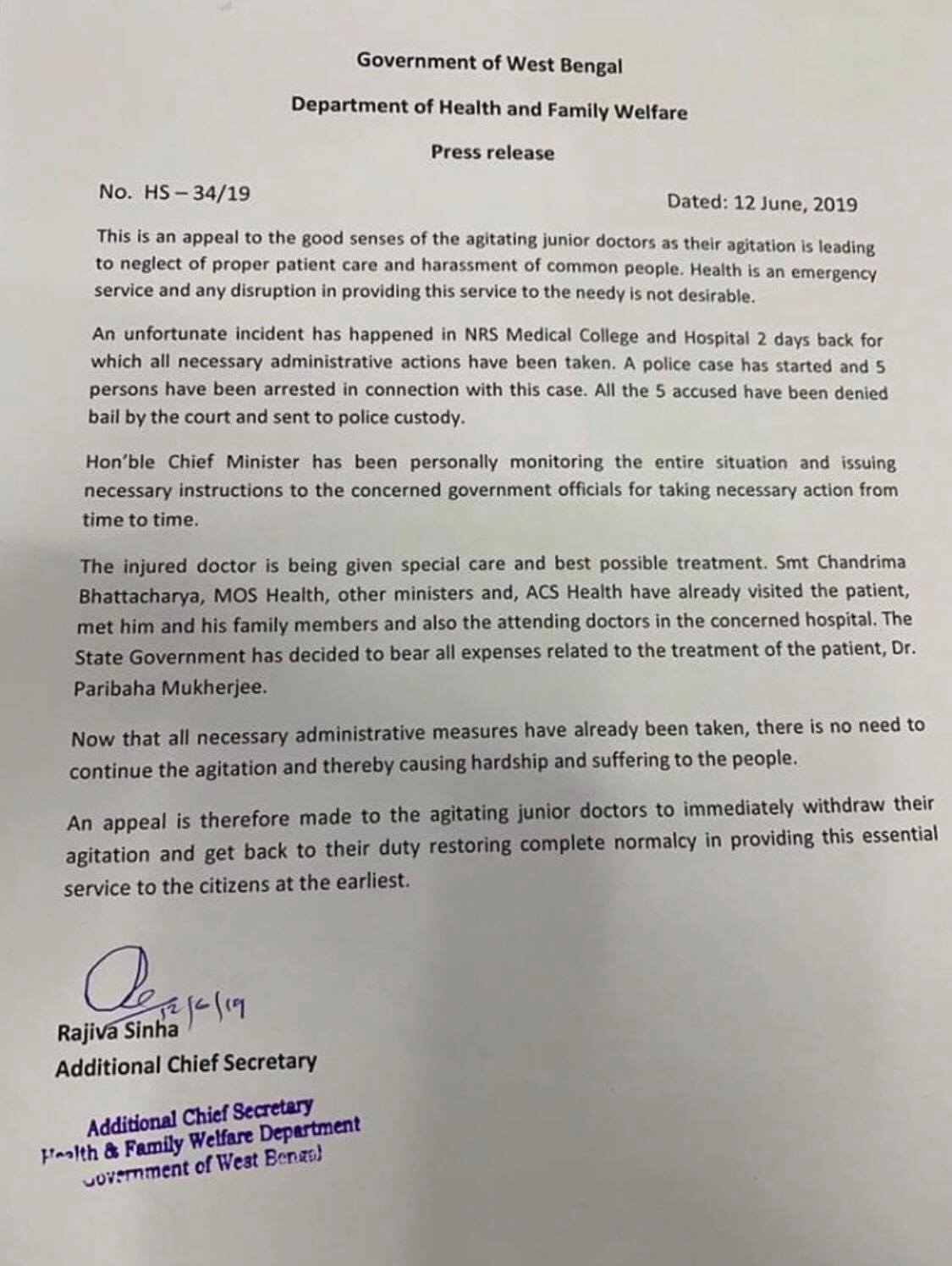 Dear Mr. Secretary, why did the “Police not appeal to the good senses of the mob or better why did not Mr. Chief Secretary sitting in his air conditioned office come out and meet the ransacking mob and appeal to their good senses?” and why does not Mr. Secretary provide “police services to ensure safety of working doctor, couldn’t he have prevented all of it?” Now coming to the most humiliating part of the press release which states that “All 5 accused have been denied bail by court and sent to police custody”. So, is the government telling us doctors that the 5 accused came and because the entire lot of doctors, nurses, paramedical staff and bystanders were all on hallucinogens that they saw only these 5 as a crowd of over a 100 people? Appalling, to say the least. Why should only 5 be arrested? Why not all of them? Is this some sort of sick bargain where they have traded the life of a doctor to 5 random assailants out of a mob of over a 100 barbarians? Is the police so afraid to identify them or have they just failed in their duty?

Such is the high-headedness of CM Mamata Banerjee that she has now threatened the students that she will throw them out of the hostel.

WB CM @MamataOfficial has threatened doctors on strike and asked them to, 'end protest or get thrown out'. pic.twitter.com/o8mz9xq1LU

She is nothing short of a high handed despot who believes that all should bend to her will. Well CM Madam if you believe you have all the power of the police force at your disposal then why not ensure arrest of all the perpetrators and lead the protest to a natural end? Send all of these goons to jail or do you think it’s easier to kick and thrash doctors as compared to the attackers as you may end up antagonizing a particular “Samuday vishesh”?

Is everything a vote back to you CM Mamata Banerjee? If it is then lets’ get this straight. The protesting doctors against whom you are threatening violent action are also a vote bank and they are doctors where even a single person alone has a lot more dignity and integrity than all your party workers put together. And, last and most importantly those people who are not being able to get timely treatment is because of failure of law and order and they too Madam CM are a vote bank (if you understand that language only). You Madam CM are responsible for the failure of law and order in state, for the injustice done to a young doctor, for delay in treatment to needy patients and maybe CM Mamata Banerjee, now it’s time for you to step down.

India is home to world’s 2nd largest internet user base, thanks to Reliance Jio