The Bharatiya Janata Party (BJP) is all set for the crucial 2019 Lok Sabha elections. On Tuesday, BJP chief Amit Shah launched the party’s mega campaign ‘Mera Parivar Bhajapa Parivar‘ by hoisting the BJP flag and putting the BJP sticker on his house.

Launching the Mera Parivar Bhajapa Parivar campaign Shah said, “This BJP flag is a symbol of development, belief and nationalism, and shows how appeasement, casteism and family rule is ending in the Modi era.”

Under the nearly a month-long, ‘Mera Parivar Bhajapa Parivar’ campaign, the BJP targets to put up the party flag at 5 crore houses across the country. The party is also going to urge its supporters to take selfies with the flag and post it on Facebook and Twitter with the hashtag #MeraParivarBhajapaParivar. In an audio message, Amit Shah also appealed for the same in order to ensure the party slogan ‘Ab Ki Baar, Phir Se Modi Sarkar’ comes true.

After the campaign was launched by the party president, hashtag became one of the top trends on Twitter. 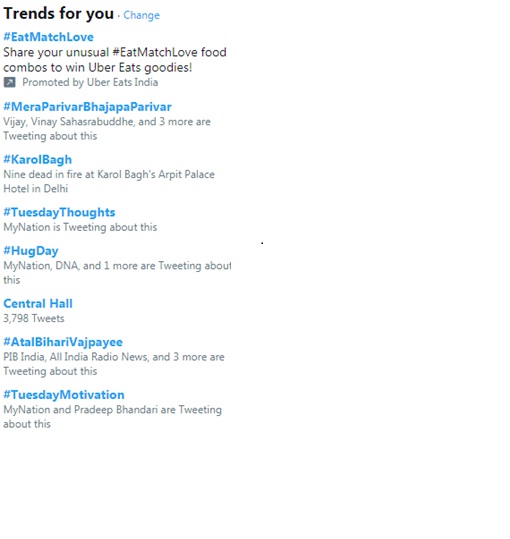 Hoisted party flag at my residence as part of the nationwide campaign – #MeraParivarBhajapaParivar . You too must… if you are a BJP supporter pic.twitter.com/dlTeVtBx1F

Celebrated and joined the #MeraParivarBhajapaParivar campaign.
My family considers it an honour to have hoisted the BJP flag in front of our home.
Supporting the cause of good governance! pic.twitter.com/j6gDwN2l8e

Joined #MeraParivarBhajapaParivar campaign and hoisted BJP flag in front of our home in Delhi with family and associates! Patriotism in the heart, National spirit filled in our home and BJP everywhere! pic.twitter.com/j9ynuHwZ6M

Many other BJP leaders joined the campaign and appealed supporters to do the same.

Hoisted the @BJP4India
flag at my home along with my party colleagues.

Together we stand for good governance, sustainable development of the nation. To us, the entire nation is a family. #MeraParivarBhajapaParivar pic.twitter.com/AqMyWJfqcB

Hoisted the @BJP4India
flag at my home along with family, well-wishers and colleagues.

Let the voice of 5 crore karyakartas echo across the nation. Be a part of our family and strengthen this journey towards progress and development. #MeraParivarBhajapaParivar pic.twitter.com/Tnk3dSHURu

The nationwide campaign is to conclude on 3 March and to be executed in four phases. It will be concluded with ‘Vijay Sankalp’ yatra on March 3 with bike rallies across the country.

BJP President Amit Shah at the flagging off of #MeraParivarBhajapaParivar campaign in Ahmedabad: On 3rd March, over 3 crore motorcycles will campaign in every Vidhan Sabha constituency across the country for Vijay Sankalp rally. #Gujarat pic.twitter.com/LzpiAAcLJ9

The party has also come up with the slogan- Modi hai to Mumkin hai. The slogan has already become popular on social media.

The campaign will be formally launched from Pandit Deendayal Upadhyay auditorium. BJP President will address the party workers on the preparations of the crucial 2019 Lok Sabha elections.

Amit Shah in his address while launching the campaign in Ahmedabad said, “On 3rd March, over 3 crore motorcycles will campaign in every Vidhan Sabha constituency across the country for Vijay Sankalp rally.”

BJP President Amit Shah at the flagging off of #MeraParivarBhajapaParivar campaign in Ahmedabad: On 3rd March, over 3 crore motorcycles will campaign in every Vidhan Sabha constituency across the country for Vijay Sankalp rally. #Gujarat pic.twitter.com/LzpiAAcLJ9

Amit Shah also made an appeal to the people of Gujarat to bless PM Narendra Modi by giving 26 out of 26 seats to BJP again with an increased margin this time.

BJP chief Amit Shah speaking in Amdavad appeals people of Gujarat to give 26 out of 26 seats to BJP again with increased margin this time and by doing so, bless PM Narendra Modi pic.twitter.com/CTcyePnVpy

While the BJP is in full gear, other PM aspirants within the Grand Alliance are fighting among themselves. Amidst all this, BJP is carrying out its campaign to repeat the feat it achieved in 2014.