The Annual General Meeting (AGM) of Reliance Industries Limited brings good news for consumers in terms of FDI and brings horror to its competitors. In every AGM, the company comes with a new plan to corner its competitors in some industry. The 42nd AGM of the company was held today in Mumbai and this time the competitors in petroleum industry faced the wrath of the Titans. Mukesh Ambani has announced one of the biggest FDI investments in the Reliance Industries oil to chemical business and this investment is coming from Saudi Arabia’s state owned Saudi Aramco which is known as the most profitable company in the world.

Saudi Aramco, the world’s largest oil producer is all set to get a 20 per cent stake in the Reliance’s oil-to-chemicals (OTC) business. The OTC business to receive this FDI, comprises of refining and petrochemicals businesses, converts petroleum into chemicals and is valued at around 75 billion dollars. The national oil petroleum producer of Saudi Arabia, Saudi Aramco will supply 5, 00,000 barrels per day of crude oil to RIL’s Jamnagar refinery, the largest refining facility in the world. The refining complex in Jamnagar has capacity to process 1.4 million barrels per day (bpd) and plans to process 2 million bpd by 2030. 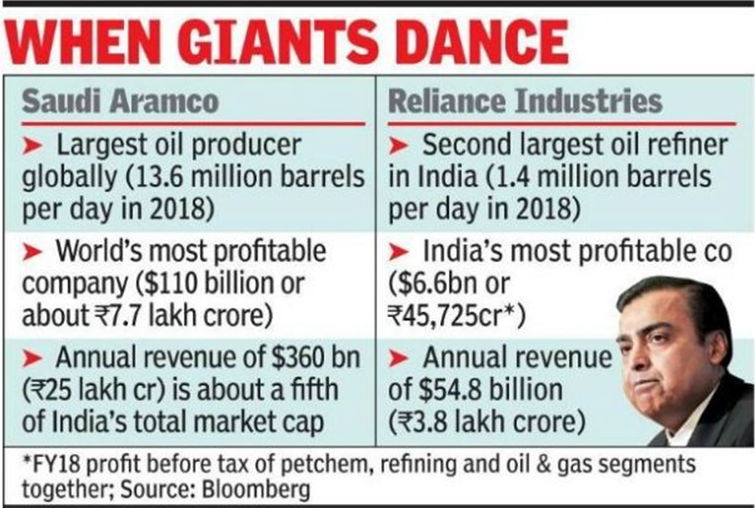 The initial discussion about FDI by Saudi Aramco took place when Saudi crown prince Mohammed bin Salman visited India in February. Reliance Industries is India’s second largest refiner and most profitable company. The sale of one fifth of its share in the petrochemicals business would bring around 10-15 billion dollars in the coffers of Reliance. The market capitalization of Reliance is around 120 billion dollars with the petrochemical business accounting for half of the valuation. Reliance would carve out the petrochemical business before the Aramco deal.

Saudi Aramco wants a larger presence in the Indian oil and gas business. India is set to surpass China as the second largest consumer of oil after the United States. The appetite of Indians for energy is growing and refining capacities need to be expanded. India has the fourth largest oil refinery capacity in the world after United States, China and Russia. The US has refining capacity 841 MTPA (Metric tonnes per annum) while China has a capacity of 589 MTPA. China alone accounts for 41 percent of Asia’s production capacity while Russia has capacity of 282 MTPA. India has 266 MTPA production capacity and may soon overtake Russia with such massive investments by companies like Saudi Aramco.

The fdi deal with Saudi Aramco would help Reliance Industries to knock off its debt. The consolidated net liabilities of the company have grown exponentially in the last few years. In the fiscal year FY 19, the company has a net liability of 45 billion dollars which is almost 40 percent its total valuation. The debt has grown due to its entry in telecom business with Reliance Jio which distributed more freebies than any politician of the country could imagine. The company wants to free up the resources from refinery and petrochemical to focus on consumer and telecom. This is the reason behind the plan to create separate entity for the petrochemical business.

UP Police impresses again, uses WhatsApp to crack down on hoaxes