Newswire
MP Police to help UP counterpart in hunt for gangster Dubey (Ld) 1 hour ago
2 SSB personnel killed in a case of fratricide in Kashmir 1 hour ago
‘Gujarat hub of Chinese investment’: Congress hits out at PM 1 hour ago
K’taka’s Covid tally breaches 25k with 1,843 new cases 1 hour ago
Biz travel biggest reason for passengers to travel: Vistara survey 2 hours ago
Black panther spotted in Karnataka’s Nagarhole Tiger Reserve 2 hours ago
Next
Prev

The latest GDP growth data released by the Chinese government suggests that China’s story of economic growth might be past its climax. The Chinese economy grew at 6.4 percent in the last quarter of the previous year, pushing the overall year growth rate down to 6.6 percent. This is the slowest GDP growth rate for the country in the last 28 years. Another sign of the slowing dragon appeared in reports on its job data, official unemployment spiked to 4.9 percent last month from 4.8 percent in November. GDP growth is lower than what was estimated by the Communist government of China and the unemployment rate is higher. 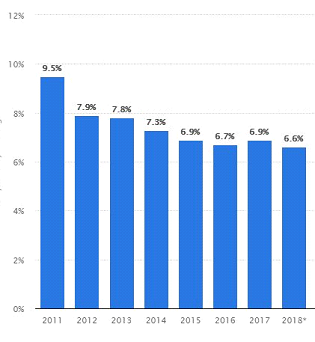 Domestic businesses in China expect another major stimulus package to reaccelerate this declining growth but the Communist government no longer trust stimulus as a tool to boost economic growth. Perhaps this is the reason behind Xi Jinping’s reluctant approach toward stimulus packages. Economists and policymakers are of the view that a stimulus package would not help the economy as it did during the time of financial crisis in 2008-09. Another reason the Chinese government is refraining from stimulus is exponential rise in the debt to GDP ratio since the global financial crisis. “What China can really do this year is to prevent deflation, prevent a recession and a hard landing in the economy,” said Chen Xingdong, chief China economist at BNP Paribas.

Signs of distress were already visible in the Chinese economy. Investment in housing, railways, factories and other fixed assets remained down despite announcements of economic stimulus made by the government. Fixed assets investment grew 5.3 percent in the first eight months of this year and is the lowest investment growth the Chinese economy has seen since 1995. This is the fifth consecutive record low for China. The Chinese economy may not be collapsing but it is facing slowdown despite government stimulus after low second quarter growth this year.

The stimulus announced by the government has not resulted in any positive impact. It included spending on road, water projects, and railways but despite the infrastructural development, overall spending slowed down. One of the major problems for China is that its economy is investment and export driven. Private investment accounts for about 60 per cent of overall investment in China and it is cause for concern that investment is going down exponentially. As the trade war escalates and exports slow down, both pillars constituting the bedrock of the economy will be left shaken. Investment is crumbling and exports are expected to decrease further as Trump plans to impose additional tariffs on China. Recently, Washington slapped a tariff of 25 percent on Chinese imports worth 50 billion to which China retaliated with a 25 percent tariff on US goods worth $34 billion. In response to China’s retaliation, Trump asked his trade representative, Robert Lighthizer, to prepare a list of goods worth $200 billion imported from China and impose on them a tariff that could range from from 10 percent to 25 percent. 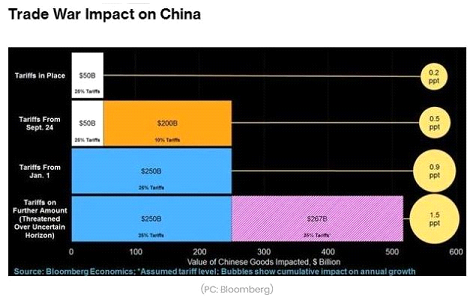 It seems that China underestimated the impact a trade war with the United States could potentially have on its economy. The heavy tariffs imposed by the Trump administration decreased the China’s exports. In the last four decades, China has established itself as the ‘factory of the world’ and its economic growth heavily relied on the exports of goods manufactured at cheap rates. The backlash against globalization and free trade across the world which resulted in increased ‘protectionism’ has ultimately hurt the Chinese economy.

The control freak Communist regime needs to make some outstanding efforts to redeem its economy. Stimulus announced by the government did not yield any positive results for the economy and the Chinese government is must now look for novel alternatives.

Another Christian clergy calls for voting BJP out of power