Trailokyavijaya: The God that Buddhists depict as stepping on Shiva’s head and Parvati’s Chest

by TFIPOST News Desk
in Culture
0

Often during spiritual and religious discussions surrounding the origins of Buddhism, it is found that Siddhartha attained Nirvana, under the Bodhi tree, based on the teachings of Sanatan Dharma. Even the earlier Buddhist texts make no qualms of heavily drawing inspirations from Hindu devis and devas, as they find ubiquitous mentions across different sacred religious texts. However, one would be surprised to know that Buddhism and its tantrik pantheon holds a pretty narrow worldview of Brahmins and Hindu devis/devas.

Historians believe that Buddhism had started as a reformist movement targeting the Brahminical culture of Bharata. In course of time, the character of Buddhism underwent important and commercial changes. The introduction of worshipping Buddha’s and the Bodhisattvas’ images provided a fruitful scope of imagination to the artists, who took considerable creative liberty to fashion a Buddhist deity named ‘Trailokyavijaya’.

The earlier pantheons of Buddha were seemingly looking to propagate Buddhism in a pre-dominant Hindu subcontinent. However, using the old tropes for dissemination of the religious readings was proving to be a difficult task, and thus the Buddhist artists took to aping the Hindu bhagwans, eventually besmirching and defiling them to generate shock value and gain acceptance amongst new followers of the religion.

Trailokyavijaya was derived from the Hindu bhagwan Tripurantaka or Tripurari. It goes without saying that Tripurari is a manifestation of the Hindu bhagwan Shiva and the Buddhist artists shamefully copied Shiva and gave his mannerism, physical structure, and weapons to Trailokyavijaya. He had blue colour, was four-faced and eight-armed. His first face displays the sentiments of wrathful passion, the right rage, the left disgust, and the face behind, the sentiments of heroism – much akin to lord Shiva in his astral form.

According to Buddhist texts, Trailokyavijaya is traditionally presented as the vehicle of Mahesvara’s humiliation and death. Mahesvara is another name of Shiva and the new age Buddhist leaders believed that Trailokyavijaya killed Shiva. He stands on Shiva’s decapitated head and tramples devi Parvati’s breasts with his feet.

“He stands in the pratyalidha attitude, tramples up on the head of Mahesvara with his left leg, while the right presses up on the bosom of Gauri. He wears garments of variegated colours, and many ornaments and garlands assigned to the Buddha,” reads one description of the imagery. 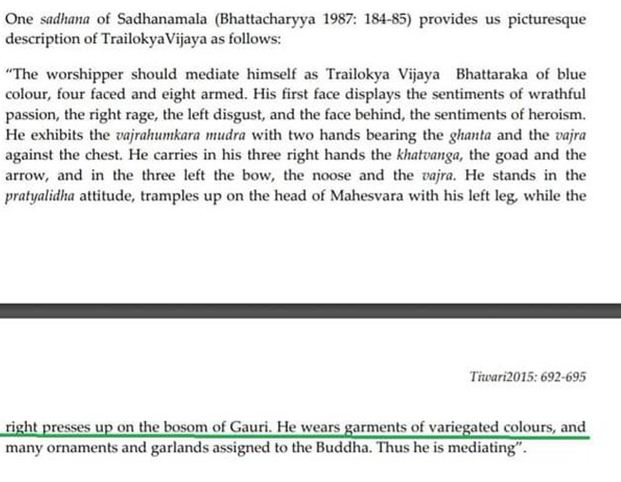 This sectarian rivalry started by Buddhist leaders to disparage the Hindu bhagwans doesn’t find a whole lot of mention across academia and very few know that Buddhism carries such notions. Most believe that it is one of the most peaceful religions in the world. However, the Tantrik pantheon begs to differ.

24. The Buddhists also invented a deity called Trailokyavijaya (He is absent in early Buddhist texts).

This Buddhist deity kills Shiva. He stands on shiva's decapitated head and tramples Goddess Parvati is breast with his feet. pic.twitter.com/smyYjKICOf

The iconography has travelled abroad

In this connection, it is important to bear in mind that such representations are very few and that they belong to the aforementioned tantrik pantheon. Stylistically, these sculptures in stone or bronze belong to a much later period, say from the 9th or 10th century A.D. The iconography of Shiva and Parvati being trampled has although reached foreign shores in China and Japan.

The Buddhists were very clever in the portrayal and depiction Trailokyavijaya. Frustrated by the misconceptions of Sanatan culture, the Dalit community was attracted by the victory of Trilokyavijaya over Maheshwar. He was told that the Brahminical ideology under which the supreme bhagwan Shiva is worshipped was defeated by the Trailokyavijaya of Buddhism.

However, when one closely dissects the reality and history of the supposed Buddhist gods, the facade falls and the truth emerges where Shiva is the one true bhagwan of the universe.

China’s Global Times threatens India and then praises its military might, all in one breath