However, as soon as the hearing started, Justice Indira announced, “I have some difficulty in hearing this matter, Let this matter be listed before another bench” and recused herself from the case. 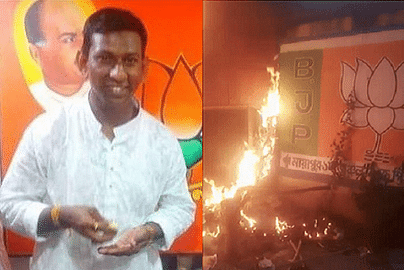 After Justice Indira stepped down, the matter was adjourned and the registry was directed to list the case before a bench where Justice Banerjee was not present.

While the Solicitor General, Tushar Mehta requested for the listing of the matter on coming Tuesday, the bench remarked that it may not be proper on its part to give any listing date as the presiding judge was recusing.

While the SC judge dropped out, citing no reason, the Calcutta High Court was breathing down the neck of the Mamata government and ordered the National Human Rights Commission (NHRC) to constitute a committee to examine complaints filed by persons who were displaced during the post-poll violence in West Bengal.

According to a report by LiveLaw, the Court further observed, “Though action should have been taken by the State but despite matter being pending in Court apparently no concrete steps have been taken.”

Stating that facts presented before the bench pointed otherwise, the Judges remarked that the TMC government was denying everything.

Judges said, “State from the very beginning had been denying everything but the facts as have been placed on record by the petitioners and also as is evident little bit from the report dated June 3, 2021 filed by the Member Secretary of the West Bengal State Legal Services Authority, are different.”

Reported by TFI, after the assembly election results were announced on May 2, a vendetta driven Mamata had unleashed her TMC goons to take apart the BJP unit workers as well as those who did not vote for her party. Dozens of BJP party workers have been slaughtered ever since with the recent casualty being Debashish Acharya, who had slapped Mamata’s nephew Abhishek Banerjee in 2015.

It is pertinent to mention that Mamata Banerjee earlier this month (June 5) appointed her nephew as the All India General Secretary of the party. Thus, it is indeed curious that within a fortnight of taking the charge of one of the topmost party position, the person that slapped Abhishek dropped dead.

Read More: The man who slapped Abhishek Banerjee in 2015 has been murdered

It is important that the courts of the country get to the end of violence orchestrated in West Bengal. Reported by TFI, Mamata Banerjee, during the election trail, had insinuated that she will undertake mass killings after she will come to power and the central forces move back.

Mamata Banerjee had said, “I keep knowledge of every inch of the elections. After the election, the security personnel sent by the central government will go back, but if our government is formed then the BJP supporters will plead with folded hands for the central security forces to be stationed for a few more days so that they (BJP supporters) could be saved.”

Read More: ‘We will see you after central forces move out,’ Mamata Banerjee threatens BJP voters of dire consequences

The TMC supremo has been infamous for her ‘reign of terror’ where political killings, lynching’s and bombings are the routine norms. After gaining keys to the office for a third straight term, Mamata has only ramped up her bloodlust for the opposition.

Farmers used casteist slurs at him and burnt him alive because he refused to support the protest. Then they tried to project it as as a suicide