The reign of terror continues in Mamata Banerjee’s third tenure as the West Bengal Chief Minister. After TMC goons slaughtered dozens of BJP workers, another person named Debashish Acharya, who had slapped Mamata’s nephew Abhishek Banerjee back in 2015 has been found murdered under mysterious circumstances. 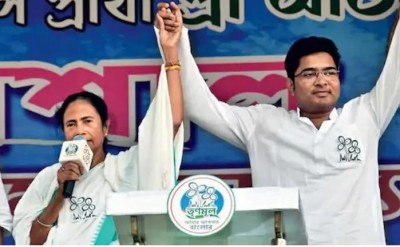 Some unidentified people yesterday (June 17) admitted injured Debashish to Tomluk District Hospital in Midnapore in a critical condition at 4 AM. However, Debashish could not survive long and succumbed to his death by afternoon.

Upon hearing about the accident, Debashish’s family immediately rushed to the hospital followed by the police. According to an Aaj Tak report, the initial investigation has revealed that on the night of 16th, Debashish along with his three friends had gone out for a ride on a motorcycle. While the three friends stopped for tea at a tea shop near Sonapeta toll plaza, Debashish phone rang out of the blue and he hurriedly left his friends to go somewhere.

The police have been trying to identify the group of people that brought Debashish to the hospital. Debashish had recently joined BJP and had campaigned for the party in just-concluded assembly polls. As a result, the saffron party has demanded a CBI investigation into the case.

Read More: The next TMC supremo, the next Bengal CM and his royal highness of House Banerjee

Six years ago, during a public function, Debashish whilst wearing a cap, mounted the stage from where Banerjee was addressing the gathering. On the pretext of clicking photos on his cellphone, he suddenly lunged towards Banerjee and slapped him, catching him off-guard.

However, the TMC workers grabbed Debashish and nearly lynched him to death instead of handing him to the police. The doctors at the time had remarked that he had deep wounds in his head at three places and in other parts of the body and for days he kept slipping in and out of consciousness.

It is pertinent to mention that Mamata Banerjee earlier this month (June 5) appointed her nephew as the All India General Secretary of the party. Abhishek is an MP from Diamond Harbour and his elevation to the top party position was been expedited by her aunt who is looking to groom him as her potential heir.

Thus, it is indeed curious that within a fortnight of taking the charge of one of the topmost party position, the person that slapped Abhishek has dropped dead. More than 30 BJP members and RSS volunteers have lost their lives in the post-poll violence unleashed in the state by the TMC cadre. A thorough investigation is needed in the case and the onus is on BJP and its state unit to pressurise the police and Mamata government to conduct a CBI enquiry.