The US is opening new fronts against China, and now the Mekong river has become the latest point of geopolitical rivalry between the two countries. The US is now accusing China of “hoarding” the Mekong river water which imperils the food, water and resources of the Southeast Asian economies.

China is the upstream Mekong River country, whereas the Southeast Asian nations- Laos, Thailand, Cambodia and Vietnam are all downstream or the Lower Mekong Basin (LMB) countries. 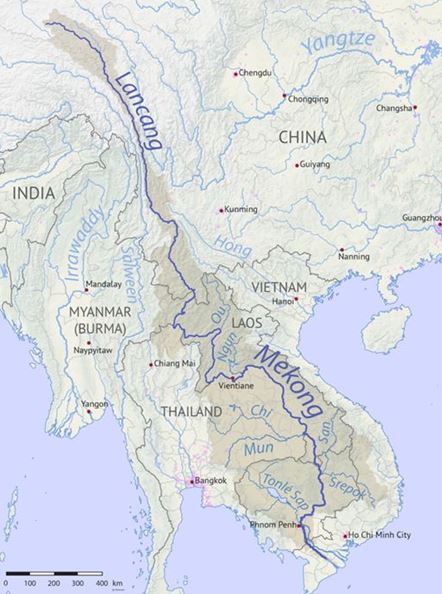 China naturally enjoys a certain advantage over the lower basin countries. But the US-China rivalry over this issue started in April when Eyes on Earth Inc, a research and consulting company specialising in water, published its findings in a US-government funded study about the last year’s droughts in the Lower Mekong Basin countries which saw the water levels in the river receding to a 50-year low, causing devastation for the farmers and fishermen alike, apart from receding to the level of exposing sandbanks along some stretches.

According to the US-based research company, the damaging droughts can be largely attributed to the Chinese dams that have been holding backwaters. Alan Basist, a meteorologist and President of Eyes on Earth said, “If the Chinese are stating that they were not contributing to the drought, the data does not support that position.”

Eyes on Earth further discovered that the eleven dams that China has built on the mighty Mekong River have a combined water capacity of more than 47 billion cubic metres. Therefore, China artificially controls the flow of Mekong into the downstream countries- Thailand, Laos, Cambodia and Vietnam. At stake are the lives of 70 million people directly dependent upon the Mekong river in these countries.

Moreover, 80 per cent of the 12 million households in these agrarian economies are directly dependent upon the Mekong River for their survival. Fish and rice form a part of the staple diet of the people in these countries. The word Mekong itself is a shortened form of Mae Nam Khong. Mae Nam translates to ‘mother of waters’ and Khong refers to the river. By controlling the flow of Mekong, China is robbing these countries of their fish, rice, and water.

In fact, the way Mekong river has dried up in the Lower Mekong Basin (LMB) countries is visible on the face of it. A Grand Tour episode, for instance, showed how the Mekong river has absolutely dried up at several places in the downstream areas.

After the episode aired Top Gear host, Jeremy Clarkson said, “It’s not just climate change to blame because there’s another problem: China. They’ve dammed the river that feeds all the water systems ’round here.” To this, Richard Hammond said, “How much sense does it make sitting here with your house on stilts with no water around to learn that the Chinese have nicked all your water?” Later in the show, Hammond remarked that this was nothing less than ‘nuclear war’.

China maintains an unequal relationship with the lower basin countries in the lack of any effective water-sharing treaty. The 1995 Mekong Agreement did establish the Mekong River Commission (MRC), an intergovernmental RBO, but the two upstream countries- Myanmar and China do not participate actively in water-sharing.

The Eyes on Earth study published in April has now paved the way for a war of words between the US and China. It all started with the US Ambassador to Cambodia Patrick Murphy saying he was “quite surprised” at the findings. Launching a stinging attack at China, he said, “To learn that a primary source for the diminished level of the Mekong, and changes in the Mekong in the Lower Mekong region, is what’s happening upstream in China – with essentially the hoarding of water.”

On its part the Chinese State media denies all such reports of Beijing holding up Mekong water. A state-run Chinese newspaper, People’s Daily, published a story titled, “River dams in China helped alleviate drought along Lancang-Mekong, research finds.” This is bizarre. Why should China want to build dams and acquire the capacity of alleviating droughts? Had the dams not been built, there wouldn’t have been anything to alleviate. Beijing has thus acquired the capacity of deciding when the Lower Basin countries get water and when they suffer droughts.

China has also been stepping up the activities of its Lancang Mekong Cooperation group (LMC), a new intergovernmental body, which a second US Ambassador calls an attempt to “sideline” the Mekong River Commission (MRC). The MRC was established with American efforts to encourage cooperation amongst Lower Mekong Basin countries.

The eleven monstrous dams constructed by China and the water wars that it has waged in the Mekong river had to become a geopolitical face-off sooner or later. With Washington engaging China in a war of words, the Mekong River has thus become the latest point of confrontation between the two giants.

‘You come to Manali,’ Kangana Ranaut tells Mumbai Police after being summoned in Sushant’s case