If it is true that the Third World War will happen over Water, then China may have as well caused the first provocation with its monstrous dams on the Mekong River that caused severe drought, last year, in the Lower Mekong Basin (LMB) countries- Laos, Vietnam, Cambodia and Thailand.

Eyes on Earth Inc., a research and consulting company specialising in water, has published its findings in a US-government funded study about the last year’s droughts in the Lower Mekong Basin countries which saw the water levels in the river receding to a 50-year low, causing devastation for the farmers and fishermen alike, apart from receding to the level of exposing sandbanks along some stretches.

In some places the water in the largest South Asian river Mekong turned bright blue from its usual murky brown, because of the shallow waters lacking in a sedimentary deposit. According to the US-based research company, the damaging droughts can be largely attributed to the Chinese dams that have been holding backwaters.

Alan Basist, a meteorologist and President of Eyes on Earth said, “If the Chinese are stating that they were not contributing to the drought, the data does not support that position.”

China claims that there was low rainfall last year on its portion of the 4,350-km (2,700-mile) river which is known as Lancang upstream. The upstream region of the River, viz. the Yunnan province of China received more than average rainfall according to satellite measures of “surface wetness” and snowmelt was slightly above-average during the May to October wet season. Yet the Lower Mekong Basin (LMB) countries in Southeast Asia witnessed the worst drought in the past five decades.

The trans-boundary River Mekong- known as Lancang in China is the most international of Rivers. The River originates in South-eastern China, before flowing through the Autonomous Tibet region and the Yunnan province of China, from where it flows parallel to the eastern-most Border of Myanmar.

It is from this point that the River enters the Lower Mekong Basin (LMB) region, first forming the Thailand-Laos border. The Mekong River forms northern and eastern boundaries of Thailand and Laos, and from this point itself there was a sharp reduction in water levels last year.

The water levels measured downstream along the Thai-Laos Border dropped, at times, by 3 metres (10 metres) than the average levels wreaking havoc for the agriculture-based LMB economies. 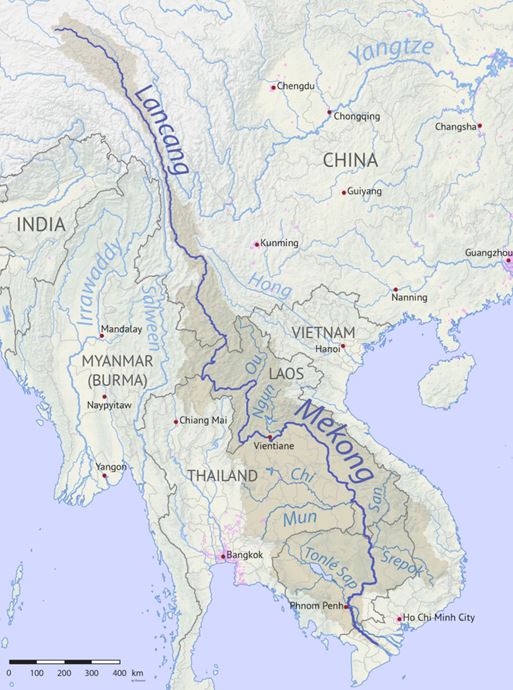 The river goes further downstream into Cambodia before re-entering Vietnam, and finally flowing into the South China Sea near the Ho Chi Minh City. Water levels, of course, dropped down further in these downstream countries hurting their agriculture-based economies.

Coming into limelight are the eleven dams that China has built on the mighty Mekong River that according to the Eyes on Earth have a combined water capacity of more than 47 billion cubic metres, but the Communist regime of China, known for its hallmark opacity, does not release any data about the amount of water that it is holding back to fill the reservoirs.

Therefore, China’s ambitions of building mammoth hydropower projects, some of the most gigantic dams in the region, is the cause of Southeast Asia’s water woes.

What further complicates the matters between China, in its position as the upstream Mekong country, and the Lower Mekong Basin (LMB) countries in Southeast Asia is the lack of any effective water-sharing treaty/ agreement on lines of the Indus Water Treaty (IWT) between India and Pakistan.

The 1995 Mekong Agreement did establish the Mekong River Commission (MRC), an intergovernmental RBO, but the two upstream countries- Myanmar and China do not participate actively in water-sharing.

They have been designated as “dialogue partners” since 1996, which means, they act as mere observers rather than cooperating in the water-sharing arrangement unlike the Lower Mekong Basin (LMB) countries. With the LMB region getting hit by the worst-ever decade in 50 years, it is crystal clear why the upstream countries, especially China, have been reluctant to cooperate.

Notwithstanding the absence of any formal water-sharing treaty, what China has been doing is nothing less than a crime against humanity given that the Mekong River is nothing less than a lifeline for the 70 million people who live in the downstream countries of the River- Thailand, Laos, Cambodia and Vietnam.

80 per cent of the 12 million households in these agrarian economies are directly dependent upon the Mekong River for their survival. Livelihoods are at risk with the Chinese dams holding back waters from the Mekong river in the Yunnan province.

All the four LMB countries could face economic devastation as the Mekong recedes in the downstream areas. Fisheries which contribute about 3 per cent of the region’s combined Gross Domestic Product (GDP) is at risk of getting seriously annihilated. Worst hit will be Cambodia and Laos, where fisheries contributes 18 per cent and 12.6 per cent of the economy respectively.

The river is also crucial for Thailand and Vietnam, while it supports agriculture in Thailand’s Northeast, it is the lifeblood for Vietnam’s rice bowl. What the Chinese dams are doing is alter the composition of the Mekong River and not just its flow, which explains change in its colour from murky brown to bright blue.

This is not really about aesthetics, but a sudden drawdown in the nutrients that reach the Vietnamese Mekong Delta. Bright blue colour means that the River is no bringing nutrients to the Vietnamese Delta which will hit its rice production and cause food scarcity in the country. As the Delta subsides, there will be seawater intrusion that can cause salinization leaving the soil unfit for rice production.

The future doesn’t look bright either given that China aspires to bolster its electricity generation capacity to 500 gigawatts by 2050, and 30 per cent of this will come from the three international Rivers- Mekong, Salween and Brahmaputra.

Diversion of the natural course of the mighty River through tunnels is another uncertainty looming large over the four Mekong-dependent Southeast Asian economies.

And China is doing all this despite relatively cordial relations with the four countries in the ongoing times, notwithstanding the historical animosities that they may have shared.

This really makes an occasion for the LMB countries to drag China before the supranational organisation, demand reparations and also a permanent water-sharing treaty that ensures the ecological protection of the downstream countries.

Also, other countries like India that have a significant stake must also intervene. Today, China is altering the flow and composition of Mekong River and there are already such apprehensions about China diverting Brahmaputra River through a 600-kilometre tunnel that could wreak havoc in India’s Northeast.

As the mighty Dragon plans to consume all the water from international rivers originating in Southern China, the downstream countries must step up and corner Beijing which has no right to alter the natural course of Rivers that are a common property of the humankind.

Foreigners decided to violate lockdown in Rishikesh, were made to write ‘I AM SORRY’ 500 times