by Shantanu Shekhar
in Analysis
0

The Modi government approved 10 percent reservation for economically weaker upper castes. The Bill proposing the constitutional amendments will be moved in Parliament tomorrow. The decision was taken on Monday during the cabinet meeting.

According to the reports, the quota will be applicable for those belonging to the general category with income of less than Rs. 8 lakh per annum. This quota will be for those applying for public employment and in educational institutions. However, there will be no quota for those owning land covering 5 acres and above and for those who have residential houses of 1,000 square foot and above. The 10 percent reservation will be over and above the 50 percent reservation already granted to the SC, ST and OBC communities in India.

But the demand for the reservation of the economically weaker upper caste of the society had been raised form the time when the concept of the reservation was being debated. In fact, in the constituent assembly debates for framing the constitution, the economic status was considered (later over-looked) as a major criterion for deciding the brackets of reservation. The issue of reservation on the basis of economic status was always on the list but a significant step was only taken in 1978 when the Mandal Commission was established by the then PM Morarji Desai to assess the situation of the socially and educationally backward classes.

In 1980, the Commission submitted its report and recommended a 27% reservation for Other Backward Classes (OBCs) in respect of services and public sector bodies operated by the Union Government. Though its recommendations were not implemented till 1990, it opened the way for the reservation of economically weaker upper castes. The Mandal Commission Report gathered dust under the table for years together till the V.P. Singh’s Government announced on August 2, 1990, the acceptance of its recommendations, to keep reserve 27 percent of job-availability for the OBCs.

But, the outcome was horrible. It led to violent agitations and self-immolations mostly in the northern states like Uttar Pradesh, Delhi, and Haryana demanding for the withdrawal of the concession, which never happened. The disturbances continued for several months. Later, P.V. Narasimha Rao’s government in 1991 brought two changes in the OBC Reservation Policy. Firstly, within the OBC reservation quota, preference was to be given to the candidates belonging to the poorer sections. Secondly, 10 percent of Public Services shall be reserved for economically backward sections of the people, not otherwise covered by the scheme of reservation.

Unfortunately, the announcement of job-reservation did not satisfy the Indian Christians and the Muslims who demanded additional job reservation for themselves. However, the matter came before the Apex Court. A nine-Judge Bench of the Supreme Court of India in Indra Sawhney Case (1992) struck down the 10% reservation based on economic criteria, proposed by the Narasimha Rao government.

The SC had made other recommendations in the case but many of them had been overruled by constitutional amendments like quota in promotions and limit on the reservation quota which was set at 50%. However, the provision of 10% reservation based on economic criteria was stalled.

Another important factor to be mentioned here is the unavailability of exact population figures for the OBCs and economically weaker upper castes. The data used was taken from the 1931 census, thus most of the calculations were merely based on the estimations. Though the data was made available after the census of 2001, no step was taken till 2003. 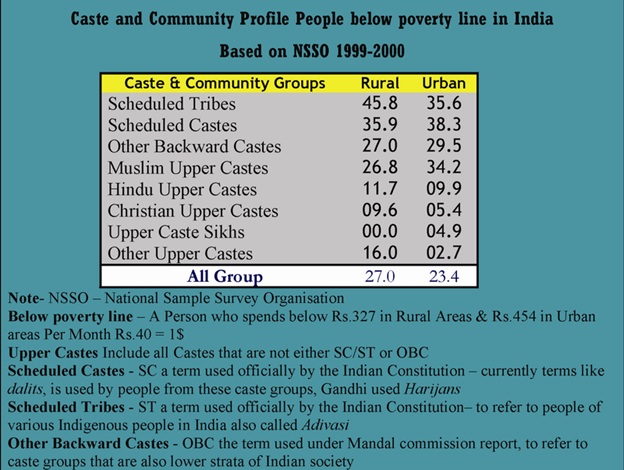 In 2003, the BJP government under PM Atal Bihari Vajpayee appointed a group of ministers for suggesting measures for the implementation of separate quota for the poor among forward castes. Again in 2004, a task force was set up to work out the modalities for providing reservations to the poor among forward castes. But, it came to naught. Furthermore, in 2006, Congress government-appointed a commission to study separate quota for economically backward castes. Since then, no development took place under the 10 year of the Congress government on this front.

As is very clear, demands for the reservation for economically weaker sections have been raised from time to time, but they were ignored in favor of caste-based politics. With today’s decision, the Modi government has finally paid heed to these longstanding demands. It is a welcoming step taken by the Modi government especially for the upper caste of the society.

This is why reservation for upper caste was needed

With the decision on reservation, BJP has played a masterstroke months before 2019 General Elections

Rocketry review: The nation would be forever indebted to R Madhavan