This is why reservation for upper caste was needed

Modi government has introduced 10 percent reservation in jobs and education for ‘economically weaker’ upper caste citizens. This decision is as revolutionary as the introduction of GST and the implementation of Insolvency and Bankruptcy Code. Like GST, this was long overdue. It was Narasimha Rao government which first introduced the upper-caste reservation in 1991. But due to various deadlocks including the ruling of the Supreme Court, the decision never saw the light of the day. The provision of job quota for scheduled caste and scheduled tribes had come before nation’s independence. Later, in the early 1990s, the reservation was extended to the OBCs in jobs and then in 2006, they were also provided reservation in government educational institutes.

The quota system alienated the upper caste because it was strongly aligned towards social justice rather than natural justice. The poor among the upper caste felt disenchanted as reservation only widened the gap between reserved and unreserved castes. The reverse discrimination towards the people for being born to a particular caste created unrest in the society. For an example, if two friends, belonging to the same economic background but inheriting different caste identity, prepare for an entrance exam or a job and score almost the same marks, one of them gets selected just because s/he belongs to so-called ‘marginalized community’ and then the resentment becomes obvious.

French Journalist Francois Gautier published an article on May 2006 with the headline ‘Are Brahmins the Dalits of today?’ This was the time when Manmohan Singh government had taken the decision to extend OBC quota in educational institutions. He presented the vulnerable economic conditions of upper caste (especially Brahmins) in the country. “At a time when the Congress Government wants to raise the quota for Other Backward Classes to 49.5 per cent in private and public sectors, nobody talks about the plight of the upper castes,” wrote Gautier.

The report by Gautier also busted the perpetuated claim that manual scavenging is done only by lower castes. “There are 50 Sulabh Shauchalayas (public toilets) in Delhi; all of them are cleaned and looked after by Brahmins (this very welcome public institution was started by a Brahmin). There are five to six Brahmins manning each Shauchalaya. In most villages in UP and Bihar, Dalits have a union which helps them secure jobs in villages,” Gautier states.

Gautier found in his research that more than fifty percent of rickshaw pullers in Delhi’s Patel Nagar were Brahmins. The same goes for rickshaw-pullers of Varanasi. The condition of upper castes in southern states is much worse; seventy percent of domestic cooks in Andhra Pradesh were found to be Brahmins. “A study of the Brahmin community in a district in Andhra Pradesh (Brahmins of India by J Radhakrishna, published by Chugh Publications) reveals that today all Purohits live below the poverty line,” wrote Gautier. Tamil Nadu government had extended reservation to 69 percent of the lower caste population; keeping only 31 percent seats open for the general category. 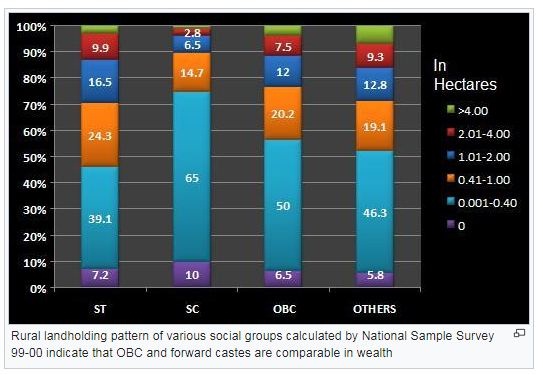 In Karnataka, per capita income of Brahmins was 537 rupees in 2006 in comparison to 577 rupees of ST, 680 rupees of SC, 794 rupees of Muslims, 914 of Vokkaligas, and 1,562 rupees of Christians. Therefore, Hindu upper caste in the state emerged out to be economically marginalized in comparison to Dalits, Muslims, and Christians. The sociologists of the country opposed OBC reservation and called it ‘tokenism’. Andre Beteille and Partap Bhanu Mehta, two most respected academicians of the country resigned from National Knowledge Commission (NKW) in 2006 when UPA government decided to extend reservation to OBCs in educational institutions. These esteemed sociologists of the country having worked comprehensively on the caste system in India were opposed to the extension of reservation.

Modi government effectively counters the propaganda of BJP being anti-Savarna