In the last four and half years of Modi government, the automobile and transport sector in the country has grown at a rapid pace. As per an article by TV Mohandas Pai & Yash Baid in The Financial Express, the transport sector generated 34 lakh jobs in FY 18 while in the first 9 months of FY 19, almost 28 lakh jobs were created. The data from Society of Indian Automobile Manufacturers (SIAM) and the Tractor and Mechanization Association (TMA), the apex bodies for the automobile and farm mechanization, (for tractor sales) give a clear picture that job creation has grown at a steady pace in the sector. 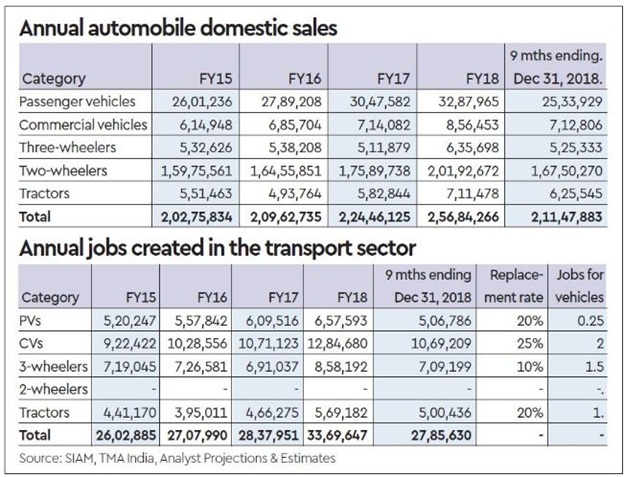 In the last few days, there has been a lot of debates over the issue of job creation under the current government. The opposition led by Congress seeks to attack Modi government over the employment issue and wants to use it as one of its poll-planks in the 2019 general election. Earlier, think tank like Centre for Monitoring Indian Economy (CMIE) which is ideologically aligned to Congress party published premature reports on jobs in order to target the Modi government. The organization released a report based on a sample survey of 1, 40,000 respondents in December which claimed that the number of jobs in the country had declined by 1 crore in the last year. However, many other surveys and data suggest a totally contrary story.

The automobile sector under Modi government has grown at a speedy rate and especially, the domestic sales have contributed to this growth story. The rising disposable income due to the cut down in the prices of basic goods and services has allowed the people to own vehicles. The overall domestic automobiles sales increased by 7.01 percent between FY13 to FY18 with 24.97 million vehicles getting sold in FY18. The growing middle class and the demographic dividend (the majority of the population in working age) are the main reasons behind the exponential growth of the automobile sector in the country. The data from SIAM and TMA is considered as one of the most comprehensive from the consumer sector of the country. As per this data, the number of jobs created in transport sector was 26 lakh in FY 15, 27 lakh in FY 16, 28 lakh in FY 17 and almost 28 lakhs in first nine months of current fiscal year.

The automobile industry in India is one of the largest in the world accounting for 7.1 percent of the country’s GDP. It along with the IT sector contributes handsomely to the exports of the country. The country is also the seventh largest manufacturer of commercial vehicles in the world. The export of commercial vehicles brings a lot of foreign exchange in the country. The automobile sector is set to accelerate the exports of India given its expertise in the automobile and technology sector. Developing countries like Mexico, South Africa have similar requirements like that of India and thus these countries are likely to import automobiles in huge number from the same.

The country plans to lead the way in the sector which can be called as the confluence of automobile and information technology. Together these are being referred as CASE- connected, autonomous, shared mobility and electric. The Indian base is already churning out software codes for Mercedes-Benz’s autonomous and connected cars for the future. The driverless cars connected with the Internet of Things (IoT) are the future of the automobile industry and India seems to be heading towards the same.