4 years of the Modi Government : How India performed in the automobile sector

The automotive industry in India is one of the largest in the world accounting for 7.1 percent of country’s GDP. It is one main industry along with information technology which contributes handsomely to exports of the country. The automobile sector is dominated by two wheelers which account for 81 percent of market share, the largest in the world. Passenger four wheeler vehicles were second largest contributor with 13 percent market share. The commercial vehicles and three wheelers contributed 3 percent each.

The growing middle class and the demographic dividend (majority of population in working age) is the main reason behind the exponential growth of automobile industry in the country. Since decades the urban areas has been driver of the automobile growth but in last few years the rural landscape of the country in main market, especially for two wheelers segment. The automobile sector under Modi government has grown very fast, especially the domestic sales due to growth in economy. The rising disposable income due to the cut down in the prices of basic goods and services has allowed the people to enjoy the vehicle rides. The overall domestic automobiles sales increased at 7.01 per cent combined annual growth rate (CAGR) between FY13-18 with 24.97 million vehicles getting sold in FY18.

Though, the exports has increased but growth in exports has also been slow given the global economy has been in shambles except last year. The global economic recovery last year was evident in substantial rise in exports. The automobile exports from India increased 15.81 per cent in April-February 2017-18. During the same period, two and three-wheelers exports increased 20.30 per cent and 37.02 per cent, respectively. The overall automobile exports from India grew at 6.86 per cent CAGR between FY13-18.

Given the rise in domestic consumption as well as in exports it is obvious that production has gone up and the companies have posted good profits last year. The industry produced a total 29,075,605 vehicles including passenger vehicles, commercial vehicles, three wheelers, two wheelers and quadricycle in April-March 2018 as against 25,330,967 in April-March 2017, registering a growth of 14.78 percent over the same period last year.

The turnover of the sector which declined in 2013-14 due to slowdown in economy and policy paralysis in the UPA government, picked up after the Modi government came to power with full majority. The turnover growth slowed little due to twin shocks of demonetization and GST but it picked up once again when the spillover effect of these policies ended.

The Indian automotive industry has become the fourth largest in the world with 9.5 percent increase in 2017. The country is also the seventh largest manufacturer of commercial vehicles in the world. The export of commercial vehicles brings lot of foreign exchange in the country and the automobile exports is being seen as the next big thing in the country because export to other developing countries like Mexico, South Africa whom requirements are similar to that of India are importing in large numbers. In 2014, the largest importers were:- 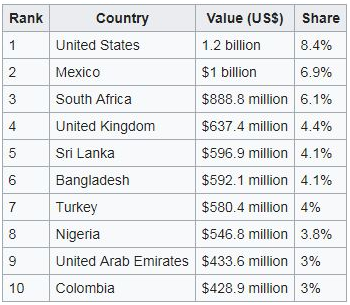 The government of India wants a major shift towards electric vehicles (EVs) by 2030 as committed in the Paris Agreement. The shift to EVs will help the country to reduce its import bills on petroleum purchase because most of the foreign exchange is spent on them. It will also be helpful for environmental sustainability of the country which is facing several problems due to global warming effects. The government plans to subsidies the production and purchase of electric cars to incentivize the buyer. It has also put the electric vehicles under 12 percent GST rate to encourage the buyers.

The overall performance of automobile sector has been satisfactory under this government. The reason behind initial lag up was the slowdown in global economy which affected exports heavily, which constitute significant proportion of commercial vehicle sales. The domestic market showed positive response in first two years of Modi government but later slowed down due to twin shocks of demonetization and GST. The best performance by the automobile sector under the Modi government was in last fiscal year when the domestic sales as well as exports increased exponentially. This was due to pickup in the global economy and domestic economy coming out of shocks of demonetization and GST. Seeing the rapid growth in the sector last year and positive forecast of economic growth in the upcoming years, the automobile industry is expected to grow with accelerated pace in the next few years.