by Anupam Kachroo
in Trending
0

Rahul Gandhi, the undisputed king of faux pas, did it again. Recently, Rahul Gandhi shared a story on Sainik School that opened the doors to girls, after half a century of its existence. While the story referred to Mizoram, while sharing, Rahul instead wrote that it was of Manipur. This frightening show of ignorance, wherein the “leader” of opposition is confused between Mizoram and Manipur, is not something to be made fun of, but should raise concerns about the well being of the dynast. 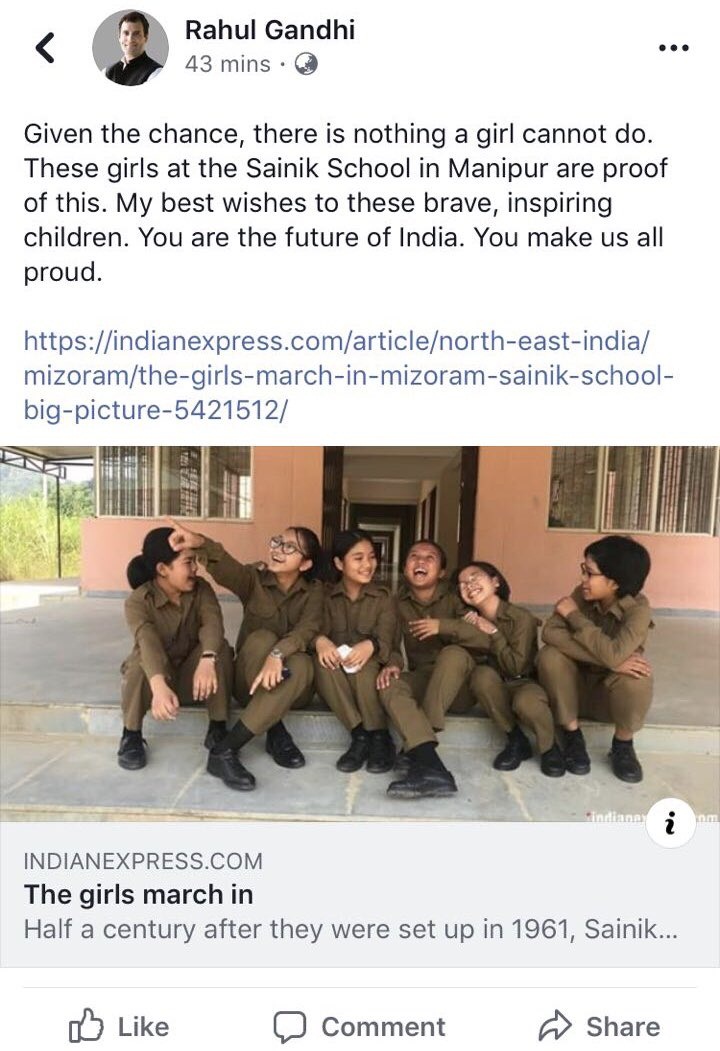 48 minutes to edit the original post because who cares about Northeast..

From “converting potato to gold”, to poverty being a state of mind, to 526 INR for a Rafale jet, Rahul Gandhi has said it all. Being an avid stock market fan, Gandhi quoted a price of Rs 700 crore per aircraft in Delhi and Karnataka. In Parliament, he reduced it to Rs 520 crore per aircraft, in Raipur he increased it to Rs 540 crore. In Jaipur, he used the two figures – Rs 520 crore and Rs 540 crore in the same speech. In Hyderabad, he invented a new price of Rs 526 crore. He has clearly exalted himself to being India’s answer to Charlie Chaplin.

Rahul Gandhi, the blue-eyed boy of the right, is internationally known for his ignorant remarks. Be it Rafale, Doklam or the NCC, Rahul Gandhi is clueless about all things that matter. Last year, when addressing a rally in Jaunpur, he aimed his words at former first lady of the US, Michelle Obama, the Congress president stated, “Jab Obama ji ki patni America mein apni rasoi mein kuch pakaye, patilon ko dekh kar kahein sundar patila hai, aur patile pe likha ho ‘Made in Jaunpur’. Rahul Gandhi had also claimed that the founder of Coca Cola used to sell shikanji, a claim that the hapless spokesperson of their party had to back, despite its evident stupidity.

Rahul Gandhi’s speeches have not only been weird, absurd and illogical but have now also become repetitive, predictable and senseless. It would have been excusable had he not been a politician, but someone like him in the race for PM should terrify each and every one of us, regardless of our political inclination.

An Indian, a Hindu, and a Kashmiri pandit. He is an athirst reader and knows something about everything. Former Associate Editor at rightlog.