The calculations by Committee on Real Sector Statistics on new GDP growth data have led to series of allegations and counter allegations between the government and the Congress party. Former finance minister, Arun Jaitley jumped in the debate with a Facebook post. “The policies of the UPA to promote growth led to macro instability thus producing a poor quality of growth. Fiscal discipline was compromised and the banking system was advised to go in for reckless lending notwithstanding the fact that it would eventually put the banks at a risk. And yet when the UPA moved out of power in 2014, the last three year record, even in terms of growth, was less than modest”, wrote Jaitley. 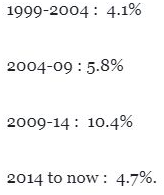 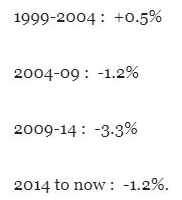 A sub-committee headed by N.R. Bhanumurthy, a professor at the National Institute of Public Finance and Policy (NIPFP), within the committee on Real Sector Statistics headed by Sudipto Mundle, was given the task to link the old and new GDP series through the back series data. The data has been missing because Modi government changed the base year from 2004-05 to 2011-12. When the government decided to change the base in 2015, many leaders of the Congress party were criticizing the government for muddling with statistics and non-transparency. But, after the revised data showed that GDP growth touched double digit two times in the UPA era, Congress party jumped to take credit for that. Although, Ministry of Statistics and Programme Implementation (MOSPI) said in a statement on Sunday, “The estimates in the Report are not official estimates and are meant only to facilitate taking a decision on the appropriate approach. Methodology not yet finalized, various alternative methods being explored”. 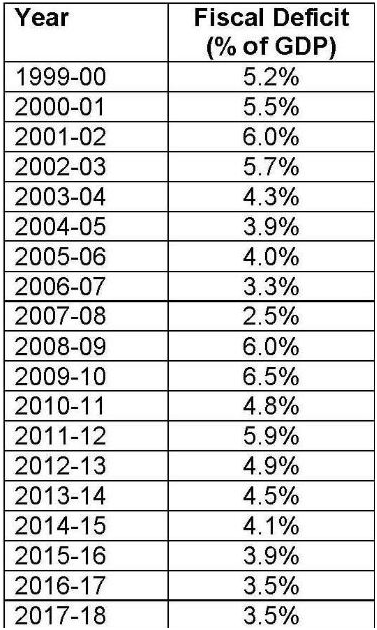 In the facebook post Jaitley said, “Firstly, fiscal discipline was compromised and the banking system was advised to go in for reckless lending notwithstanding the fact that it would eventually put the banks at a risk”. He cited the macroeconomic indicators like Current Account Deficit (CAD), Inflation, fiscal deficit, bank credit growth, and GDP growth to substantiate his claims.  When the first Vajpayee government came to power, the macroeconomic fundamentals of the country were in shambles. The fiscal deficit was at 5.8 percent, CPI inflation was at 6.8 percent, Current Account Deficit (CAD) was at 1.3 percent and foreign exchange reserves were just 29.4 billion in the fiscal year 1997-98. So the country was weak on every major macroeconomic indicator.

Now let us take a look at the same indicators in the fiscal year 2003-04 to examine whether the six years of Vajpayee led NDA rule improved the economy or not. In the fiscal year 2003-04, the fiscal deficit was 4.5 percent of GDP, CPI inflation was 3.9, CAD was at 2.3 percent surplus, and foreign exchange reserves were at 113 billion (four times 97-98). So the macroeconomic conditions improved significantly at the GDP growth was at 8.08 percent as per new series data. It is not that UPA era reforms are being hailed as the byproduct of Vajpayee era reforms after the new data on real sector growth came. On the very day of the sad demise of Atal ji, economist Arvind Panagariya tweeted, “Truly saddened by the passing away of former PM Atal Bihari Vajpayee. His reforms were pivotal to India achieving 8% plus growth during the decade spanning 2003-12. A true leader with vision and foresight. India will miss him”. At that time, the new findings of GDP growth were not made public.

Truly saddened by the passing away of former PM Atal Bihari Vajpayee. His reforms were pivotal to India achieving 8% plus growth during the decade spanning 2003-12. A true leader with vision and foresight. India will miss him https://t.co/rNVXt0bNsA

In the initial years of the UPA era, the economic growth was supported by the economic reforms taken by the previous Vajpayee government. The investment in infrastructure through the Golden quadrilateral scheme and Pradhan Mantri Gram Sadak Yojana (PMGSY) proved a major success. The introduction of Fiscal Responsibility and Budget Management (FRBM) act boosted the foreign investment in the Indian economy. The New Telecom Policy introduced by the Vajpayee government revolutionized the telecommunication in the country. The first-ever privatization of loss-making public sector units and the introduction of independent regulatory authorities brought the country out of the socialist hangover. So these factors contributed to the growth of Indian economy till the first term of the UPA era.

The UPA government left the economy in a complete mess. The average CPI inflation for 2009-14 was 10.4%, CAD average for 2009-14 was 3.3%, bank credit growth has gone up exponentially due to reckless lending to support the economy, and fiscal deficit for FY 14 was 4.5 percent. The Modi government took steps to strengthen the macroeconomic fundamentals of the country. The inflation for 2014 to now is 4.7%, CAD for 2014 to now is 1.2%, fiscal deficit has come down to 3.5 percent in last FY, bank credit is being rationalized and NPA mess is expected to get solved by the IBC reforms, and also the GDP growth has increased. So, riding on strong macroeconomic fundamentals, economic growth is expected to escalate further. Now, If in 2019 the BJP government is ousted from power and the new government starts taking credits for the economic growth just like the Congress, then this should be considered  treachery and disrespectful; But the sad thing is ‘this is how politics works’.

Delhi becomes a hotbed of drugs, and AAP Government has a lot to answer