For high GDP growth during UPA era, reforms of Vajpayee government were responsible

One thing which is painful in the history of economic growth of any country is that the leader whose administration takes the reforms recourse never gets credit for it in popular perception. This is not limited to India, it is a global phenomenon. In the United States, the economic growth was excellent under the presidency of Bill Clinton and he was appreciated in the media for that. But the majority of economists agree on the assessment that high growth in Clinton presidency was due to economic reforms took by Regan administration. The same is happening in Trump presidency, he is taking credits for economic growth and low unemployment despite the fact that this is the result of Obama era reforms.

The story has been repeated in India too, Congress party claims that the first term of UPA was the golden era of Indian economic growth. But it is not ready to accept that the growth was a result of Vajpayee government’s policies. A committee on real sector statistics headed by N.R. Bhanumurthy, a professor at the National Institute of Public Finance and Policy (NIPFP) concluded that the economic growth touched double digit two times under Manmohan Singh government. The committee has accepted that these numbers are experimental and indicative and final figures will be calculated soon. The final calculations will be examined by the advisory committee on National Accounts Statistics before it is finally vetted by the National Statistical Commission. But leaders of the Congress party instantly came out to claim the credit for economic growth. Now let us compare some macroeconomic indicators to examine the claims of Congress party.

When the first Vajpayee government came to power, the macroeconomic fundamentals of the country were in shambles. The fiscal deficit was at 5.8 percent, CPI inflation was at 6.8 percent, Current Account Deficit (CAD) was at 1.3 percent and foreign exchange reserves were just 29.4 billion in the fiscal year 1997-98. So the country was weak on every major macroeconomic indicator. Now let us take a look at the same indicators in the fiscal year 2003-04 to examine whether the six years of Vajpayee led NDA rule improved the economy or not. In the fiscal year 2003-04, the fiscal deficit was 4.5 percent of GDP, CPI inflation was 3.9, CAD was at 2.3 percent surplus, and foreign exchange reserves were at 113 billion (four times 97-98). So the macroeconomic conditions improved significantly at the GDP growth was at 8.08 percent as per new series data.

Now let us take a look at economic reforms which contributed to economic growth in the initial years of Manmohan Singh government. The investment in infrastructure increased exponentially under the Vajpayee government with the introduction of two major projects. The first being the golden quadrilateral which aimed to connect four metropolitans in north, south, east, west and the second being Pradhan Mantri Gram Sadak Yojna with the aim to connect villages of the country with towns and cities. The introduction of Fiscal Responsibility and Budget Management (FRBM) act which boosted the foreign investment in the Indian economy. The increased foreign investment in the initial years of the UPA era was the result of this act. The New Telecom Policy introduced by the Vajpayee government revolutionized the telecommunication in the country with the poorest person having a mobile phone today (Congress keeps claiming credit for this). The first-ever privatization of loss-making public sector units and the introduction of independent regulatory authorities brought the country out of the socialist hangover. So these factors contributed to the growth of Indian economy till the first term of UPA era. 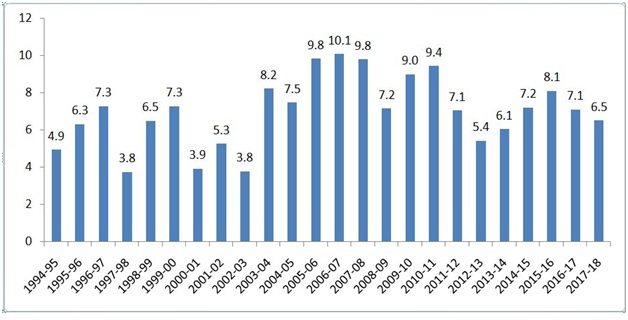 The economic growth in the first two years of second UPA government was supported by high fiscal deficits and unsustainable bank lending to keep pumping ‘easy money’ in the economy.  BSE 100 companies remained stagnant from 2011-12 to 2013-2014 but their borrowing increased by nearly 70%; capacity utilization decreased from 84 percent to 72 percent.  Public sector bank loans trebled from Rs 18 lakh cr to Rs 52 lakh cr between 2008 & 2014. The easy loans turned into NPA due to infeasible projects, economic slowdown, lack of clearances including environmental, and impact of investigations into other irregularities. The huge NPA problem faced by the country today is the result of unfeasible lending in the UPA era. “NPAs have been plaguing banks for long, but the issue was being recognised only recently. Therefore this is a legacy issue, although the recognition and reporting of these have taken place only recetely”, said RBI governor Urajit Patel, recognizing NPA as legacy issues. The ‘easy money’ sustained the economic growth for two years but the boom busted soon and India became ‘fragile five’ member in the last year of UPA government, the deficit financing strategy was used for higher economic growth. In the last years of UPA government, India faced the problem with inflation rate reaching close to double-digit, GDP growth coming down, foreign investment drying up, and CAD going up due to increasing imports. So, the UPA government took over a healthy economy and left it in a complete mess.

The Modi government again took painful reforms like demonetization and GST implementation to restore the strong macroeconomic fundamentals in the country. Today fiscal deficit is low, foreign exchange reserves are at a new high, and economic growth is predicted to go upward in upcoming years given conditions remain constant. The economic reforms like GST implementation, IBC, and social sector spending, improved ease of doing business will contribute to economic growth of the country in future. So, Indian economy will grow at good pace in upcoming years. Now suppose in 2019 the BJP government is ousted out of power or suppose someone other than Narendra Modi becomes prime minister. If the new prime minister starts taking credits for economic growth by himself rather than being grateful to PM Modi, this should considered as treacherous and disrespectful, but the sad thing is that ‘this is how politics works’.

Congress exposed on the issue of Railway recruitment