Huawei, the Chinese Smartphone maker has taken over the American giant Apple as the second largest Smartphone maker in the world. The South Korean giant, Samsung has maintained its top position but its sales have declined significantly. Data from International Data Corporation (IDC) research shows that in the second quarter of 2018 Huawei’s sales jumped 41% to 54.2 million (5.42 crores) units, from 38.5 (3.85 crores) million during the same period of 2017. The global market share of Huawei increased to 15.8% in the quarter, a sharp increase from 11.0% a year earlier. The cameras of Huawei are very good and this has increased its reputation in the domestic as well international market.

Apple shipped 41.3 million (4.13 crore) units of its signature iPhones in the second quarter of this year. The American giant has been able to post only 0.7 percent growth over the previous year sales of 41 million. IDC’s Ryan Reith pointed out that Apple is likely in for a holiday sales boost following its annual product refresh. “It’s likely we’ll see continued movement among the top-ranked companies in 2018 and beyond,” he said. The company announced 11.5 billion net income in the April-June period, a 32% surge from the previous year. This was because sales of the high-priced iPhone X were stable. The sale of high-end smartphones is confined to the latest products of few companies. “For most markets, the ultrahigh-end competition is largely some combination of Apple, Samsung, and Huawei, depending on the geography, and this is unlikely to change much in the short term,” Reith added, referring to phones in the $700-plus range. 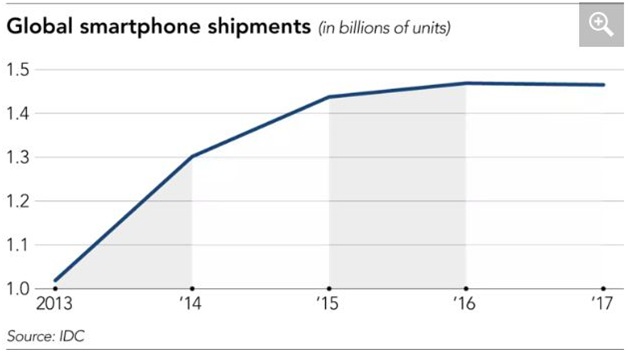 Samsung, the largest Smartphone vendor in the world retained its top position in the quarter but its shipments fell by 10.4% to 71.5 million (7.15 crore), from 79.8 million (7.98 crores) a year earlier. The company suffered from a huge drop in its largest markets- China, and India. The low-cost Smartphone market in these countries was snatched by Chinese companies Huawei and Xiaomi.  South Korean media reported that Samsung once had a 20% share of the Chinese market, but the figure was down to a mere 1% in the fourth quarter of 2017. In neighboring India, Samsung has been top players for last few years but it was taken over by China’s Xiaomi in the first quarter of this year, as per the reports by IDC. 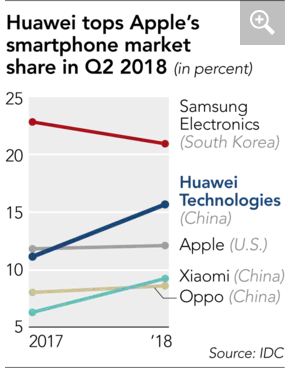 The market domination of any company has not sustained for more than a decade in the Smartphone market. As of now Samsung, Huawei, and Apple are the three largest Smartphone vendors in the world. Xiaomi and Oppo the fourth and fifth spots in the global Smartphone tally with 9 percent and 8 percent market share, respectively. The equations may change further in the future because the sales of Xiaomi phones is growing exponentially, especially in India which is one of the largest Smartphone markets in the world.  Overall, IDC said Smartphone makers shipped a total of 342 million units in the second quarter, a 1.8% on-year decline from 348.2 million. This marks the third straight quarter with a year-on-year decrease.

The Logical Indian attempts to blame the Railways with half the story, here are the facts.