Apple is among the most iconic companies the world has ever seen. Everything related to it is subject to hyper attention from media houses.  Its rise, fall, and rise again have been like the typical Bollywood movie stories. It created many firsts in the world including the revolutionary touchscreen Smartphone. The sleek design, magical user experience, and heightened software-hardware integration make its products unique. The founder of the company late Steve Jobs used to say that the most complex task is to make things simple.

The company has created another benchmark by becoming the world’s first trillion-dollar publically traded company. The rise in stock valuation of the company came along with the company announcing 11.5 billion dollar net income in the April-June period, a 32% surge from the previous year. This was due to sales of the high-priced iPhone X were stable. The sale of high-end Smartphone is confined to the latest products of a few companies like Apple, Samsung, Huawei depending on geography and this is unlikely to change in short term. Apple shipped 41.3 million (4.13 crore) units of its signature iPhones in the second quarter of this year. The American giant has been able to post only 0.7 percent growth over the previous year sales of 41 million. IDC’s Ryan Reith pointed out that Apple is likely in for a holiday sales boost following its annual product refresh. “It’s likely we’ll see continued movement among the top-ranked companies in 2018 and beyond,” he said. 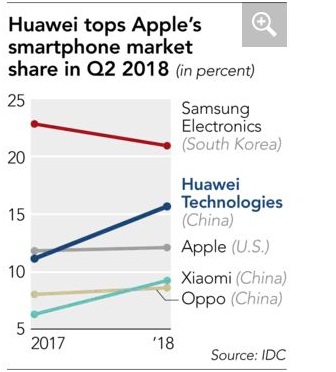 The company hit a $1 trillion market capitalization 42 years after Apple was founded and 117 years after US Steel became the first company to be valued at $1bn in 1901. To make a comparison we can say that the valuation of Apple is almost equal in GDP of countries like Mexico and Indonesia and more than the GDP of at least 170 countries which includes Saudi Arabia, Pakistan and Netherlands. If we compare the valuation of Apple with GDP of Indian states then it will be more than double of any single state. Its valuation is almost equal to combined GDP of Maharashtra (430 billion), Tamil Nadu (371 billion), and Uttar Pradesh (230 billion).

The CEO of Apple, Tim Cook sent out memos to more than 1, 20,000 employees of the company thanking them. He wrote, “today Apple passed a significant milestone. At our closing share price of $207.39, the stock market now values Apple at more than 1 trillion dollar. While we have much to be proud of in this achievement, it’s not the most important measure of our success. Financial returns are simply the result of Apple’s innovation, putting our products and customers first, and always staying true to our values.” The memo also reminded the employees of the beliefs of the company’s charismatic founder Steve Jobs. It said “Steve founded Apple on the belief that the power of human creativity can solve even the biggest challenges – and that the people who are crazy enough to think that they can change the world are the ones who do. In today’s world, our mission is more important than ever. Our products not only create moments of surprise and delight, they empower people all around the globe to enrich their lives and the lives of others. Just as Steve always did in moments like this, we should all look forward to Apple’s bright future and the great work we’ll do together.”

Apple was registered in 1976 as Apple Computer Company by Steve Jobs, Steve Wozniak and Ronald Wayne to sell personal computers the Apple I, a computer single-handedly designed and hand-built by Wozniak. The name was changed to Apple Computer, Inc. on January 3, 1977, without Wayne, who left and sold his share of the company back to Jobs and Wozniak for $800 only a couple of weeks after co-founding the company. In 2007 the company launched its iconic iPhone which continues to be the signature product of the company till now. Now that it has achieved the trillion dollar benchmark, its products are facing tough competition from companies like Huawei, the interesting thing to see in coming years will be whether the company could grow at the same pace or not?