Rising number of Merger and Acquisition operations sign of healthy economy, will benefit the consumers

As the capitalism goes in the advanced stage in the country the consolidation of companies happens. The intense competition forces the rivals to merge and take on other companies. This aspect is very visible in the telecommunication sector as the market has consolidated between four companies. The Vodafone-Idea merger to take on other large players like Jio, Airtel is a prime example of this process. In advance capitalist countries like the United States, Japan, and the United Kingdom every industry has consolidated between five or six big players. Contrary to popular perception that consolidation is bad, it actually helps the consumers and the government both. The consolidation allows the companies to sell more customized and cheaper products to the consumers. The customization happens due to data and experience of both companies allows the merged entity to know more about consumer behavior and cost goes down because less number of people and operations are required.

The process of consolidation is happening very fast in India for the last few years due to a variety of reasons like the Insolvency and Bankruptcy Code (IBC), growing competition, government’s decision to move from ‘stigmatized capitalism’ to embracing capitalism completely, a crackdown on shell companies etc.  Indian companies have been involved in deals worth a record 97.6 billion dollar this year. Walmart’s $16 billion acquisition of a majority stake in Indian e-commerce company Flipkart has been best so far pushing the total past a previous annual peak of 92.3 billion dollars. The merger and acquisitions happened mainly in technology, media, and telecom sectors. Mergers and acquisitions (M&A) are transactions in which the ownership of companies, other business organizations, or their operating units are transferred or consolidated with other entities. 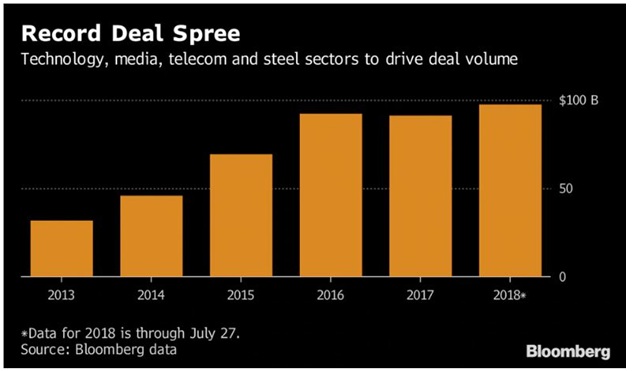 “The IBC has also spurred the activity with NPAs worth 26 billion coming back to blocks. This year, if there is one stand-out product it is really M&A,” said Kalpana Morparia, the chief executive officer for South and South East Asia at JPMorgan, which climbed the top spot in India for the first time in at least a decade. “We are seeing some great examples of inbound M&A and a fair amount of domestic consolidation, largely spurred by the bankruptcy process.” JP Morgan chase worked as an advisor in most of the deals this year followed by Goldman Sachs and Citi Group, all based in America. 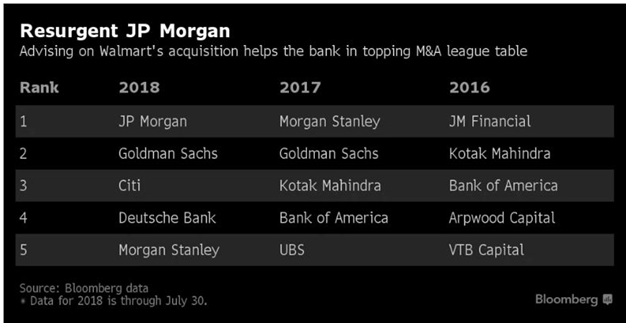 The growth of M&A operations are a clear indication that growing competition is forcing the companies to make a deal with their rivals. The consolidation helps the government to get more taxes from these companies as the tax rate for small companies is low while it is higher for large companies. The consumer is benefitted as we can see in the telecom sector the prices for calls and data are dirt cheap.

Government enforces NRC in Assam: Here’s what other leaders said

India-England test series: Players India would be counting on