Meet China, the over glorified Pakistan

by Tejasvi Malhotra
in Geopolitics, Opinions
0

The prolonged Covid-19 pandemic created so much chaos that economies are now facing the brunt of it. It even left the world’s second-largest economy under crisis. The toughest lockdown, successive Covid waves, and lower industrial output have brought the country on the verge of payment crisis. That’s why; China has announced its technical aid rather than the financial one, which Pakistan is in dire need of.

China is keeping Pakistan and Sri Lanka on hold for finance

Reportedly, China has offered technical help to the visiting Army Chief of Pakistan, as the latter is suffering from severe floods. However, China did not announce any financial assistance to the sinking country.

Pakistan’s official Inter-Services Public Relations said that during the talks in Xi’an between Pakistan’s Army Staff Chief, General Qamar Javed Bajwa, and China’s Defence Minister, General Wei Fenghe, the Chinese side expressed to provide technical assistance for flood relief work. Media reports quoted Gen. Wei, as he called both the countries “to tide over difficulties together, fully trust each other, and unswervingly support each other’s core interests on the way forward.”

On the other hand, Sri Lanka is also urging Beijing for a $4 billion loan, but talks that followed for several months appear to have not yielded an agreement. Instead of restructuring and stabilising Sri Lanka’s existing debt, Beijing has made it evident that it prefers to rather extend new loans to an already dilapidated economy.

Both Pakistan and Sri Lanka are currently facing huge financial stress, due to which they are running after Beijing’s assistance. However, in the wake of negotiations in both cases, they have now turned to the International Monetary Fund (IMF). Their new IMF commitments are now likely to impact their already owed payments to China.

Meanwhile, it’s also important to note that China keeping countries on hold for financial assistance, depicts the evident dilapidatedness of the Chinese economy. Amidst the country’s economic contraction, falling investment returns, falling real estate sector, among others clearly show the dragon under crisis.

Read more: Falling Beijing is destroying its foreign relations to pump hyper-nationalism in the country

Chinese businesses are facing the crunch of the worldwide pandemic. Its retail sales and industrial production have decreased immensely in April this year, as per the National Bureau of Statistics China. The following representation clarifies the said reality. Through this, it is evident that the Chinese economy is in distress. 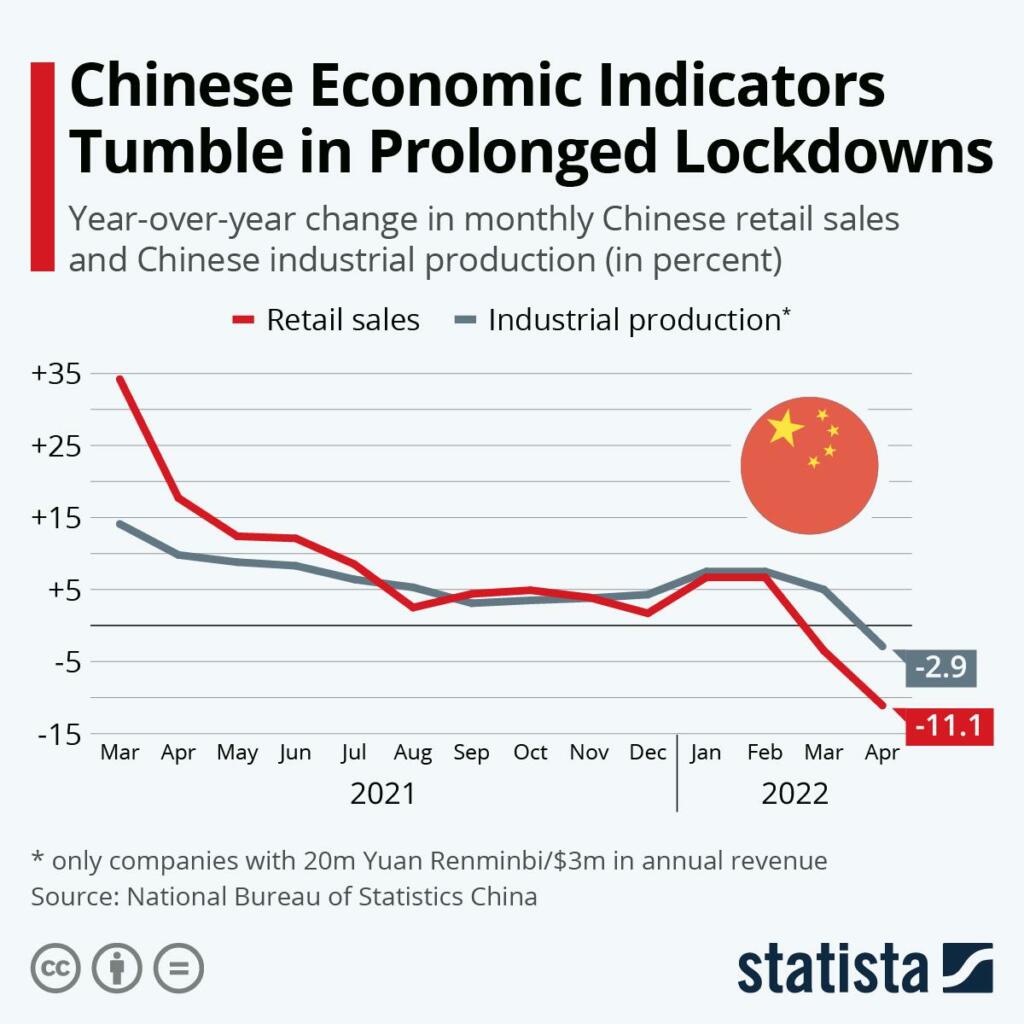 Apart from this, property investment in China is also in tatters. A surge in China’s Covid-19 cases and the deepening housing slump, are collectively increasing the pressure on consumption.

According to Le Xia, the Chief Asia Economist at Banco Bilbao Vizcaya Argentaria SA, a possible double-digit decline in the property investment indicates the overall contribution of the investment, including in manufacturing facilities.

Meanwhile, the default of EMI payments and lower property buyouts has created a huge liquidity crisis in the real estate sector. With home buyers refusing to pay mortgages and organising a social boycott of EMI payments, the mortgage sector has taken a hit.

The looming real estate sector, which accounts for 29 per cent of China’s GDP, has brought the country on the verge of bankruptcy.

The fall of the world’s second-largest economy

According to a report in the Telegraph, various analysts have warned Beijing about its adoption of a “build, pause, demolish, repeat” policy as Chinese officials try to limit supply to prevent a drop in property prices and increase economic activity through additional construction.

All this resulted in a lower growth rate. As reported earlier this year, China has set its lowest GDP target in decades. China’s Premier Li Keqiang had announced the unusually modest target of around 5.5 percent in the presence of Xi Jinping. This shows that China will witness the slowest rate of economic growth since 1991.

In July this year, it was reported that hundreds of people took to the streets to protest outside a branch of China’s central bank in Zhengzhou city in Henan province. Reportedly, the bank froze millions of dollars of deposits while telling people that they were upgrading their internal system.

This created severe havoc among the customers which pushed them to withdraw their savings. Following protests, battle tanks arrived on the streets to scare the customers. Cases like these clearly portray China in the doldrums.

Apart from this, China’s Belt and Road Initiative (BRI) has also fallen by 54 per cent since 2019. Due to this, Beijing is no longer providing hard cash for projects in Africa, amid criticism over infrastructure debt and loan defaults.

A research associate at the Africa Centre for Strategic Studies at Washington’s National Defence University, Paul Nantulya, commented on China’s funding in Africa while stating that China’s direct financing commitments had remained at a steady US$ 60 billion for the 2015 and 2018 FOCAC (China- Africa Corporation) summits, thus it was bound to either decline or disappear altogether.

To put China’s misery, more recently, it has agreed to withdraw its troops from the area of Gogra-Hotsprings (PP-15) in a coordinated and planned way, after a 15-round failure of disengagement talks. India and China carried out verification to confirm the withdrawal of troops from Patrolling Point 15 in the Gogra-Hot Springs area of Eastern Ladakh.

After skimming through all the despair that China is facing, it is imperative to note that the over glorified dragon is now unable to growl. And that is why; Xi Jinping is now trying to strengthen diplomatic ties with India, which could be seen at the recent SCO meet as well. To conclude, China is just on the verge of tasting the dust that it had served to Sri Lanka and Pakistan.

UPI needs to look beyond Google Pay and PhonePe