The Indian economy is firing all cylinders. And the upswing in economic growth, driven by investment and private consumption, is being reflected in the tax collection of the government. As per a release by the Finance Ministry, the direct tax collection grew by 23%. Direct tax collection includes Income Tax (including Securities Transaction Tax – STT) and corporate. It is considered a progressive tax, given the fact that the poorer section of society does not pay it.

Healthy growth in direct tax collection is a symbol of the strength of the Indian economy and the increasing formalisation of the system. “The figures of Direct Tax collections for the FY 2022-23, as on September 17, 2022 show that net collections are at Rs. 7,00,669 crores, compared to Rs. 5,68,147 crores in the corresponding period of the preceding Financial Year i.e., FY 2021-22, representing an increase of 23%,” the ministry said in a statement.

India posted one of the highest quarterly economic growth in its history with 13.5% in the first quarter of FY 23 (April-June). Although, given buoyant economic activity in every sector, from agriculture to manufacturing and services, the economists and statisticians were expecting an even higher growth rate.

In the last few months, large companies are hiring like never before, and salaries are going up exponentially. This is making the Indian government richer by day. India has emerged as the only bright spot amid global turmoil, and foreign as well as domestic investors are bullish on Indian economy.

“There has been a remarkable increase in the speed of processing of income tax returns filed during the current fiscal, with almost 93% of the duly verified ITRs having been processed till September 17, 2022. This has resulted in faster issue of refunds with almost a 468% increase in the number of refunds issued in the current financial year. Refunds amounting to Rs. 1,35,556 crores have been issued in the FY 2022-23 till 17.09.2022, as against refunds of Rs. 74,140 crore issued during the corresponding period in the preceding Financial Year 2021-22, showing a growth of over 83%,” the ministry statement added.

No Sector is Left Behind

All sectors of the economy are performing well with agriculture sector, which has witnessed muted growth in the initial years of the Modi growth, driving the momentum along with manufacturing, which is being propelled by PLI. The agriculture sector, which has remained a bright spot for India since Covid pandemic, has continued to perform excellently at around 4.5%. In the last fiscal year, India, for the first time in its history, exported agricultural goods worth more than 50 billion dollars given the rising demand for wheat and rice, and growth in their prices as well.

The consumption of electricity, gas and other utilities grew by 14.7% as the demand for power went up in summer season due to Air Conditioning demands. Also, the rise in factory activity and resuming of public transport, a large part of which like Metro Trains and Railways operate primarily on electricity, contributed to huge growth in the sector. 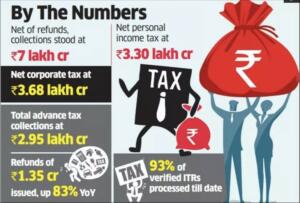 “Direct tax collections continue to grow at a robust pace, a clear indicator of the revival of economic activity post-pandemic, as also the result of the stable policies of the government, focusing on simplification and streamlining of processes and plugging of tax leakage through effective use of technology,” the Central Board of Direct Taxes said in a statement.

The pace of refund has improved significantly as the CBDT moves up in the technology ladder. In the last few years, CBDT has invested a lot in Big Data Analytics, AI, and IT transformation to bring India’s direct tax system on par with the best in the world.

“A striking statistic is the amount and number of refunds issued compared to the previous year. This appears to be because of the enhanced automated return processing capability engine finally working. This augurs well for taxpayers,” said Rohinton Sidhwa, Partner, Deloitte India.

With this kind of tax collection, the government can spend more on welfare, promoting industrial policy schemes like PLI and hire more people to improve the delivery of civic services in India. Given the government’s ambitious plan of delivery services like health, high school education free to all citizens, the rising tax collection are a big relief. Also, the rising direct tax collection will start a virtuous cycle further pushing the economic growth upwards.

If India is able to post around 7-8% growth in next 5 years, it will overtake Germany and Japan to become third largest economy in the world after the United States and China. In the last few years, India’s stature in the international arena has continuously grown as the country handled the pandemic and many other issues of development very well. Although, the economy of 1.4 billion has miles to go to become a developed country by 2047.

Meet China, the over glorified Pakistan

Pandemic is over, Economy has recovered, time to rationalise PMGKAY