What would you think if the Israelis started celebrating Adolf Hitler’s life? Hypocritical, yes? Fortunately, the Israelis are not that stupid. Unfortunately, India, evidently still has traces of hypocrisy etched deep within the system. Banaras Hindu University (BHU), the university which Pandit Madan Mohan Malaviya opened as an answer to the communal politics of the people coming out of Aligarh Muslim University (AMU), is celebrating the birthday of Muhammad Iqbal, the founding father of Pakistan. 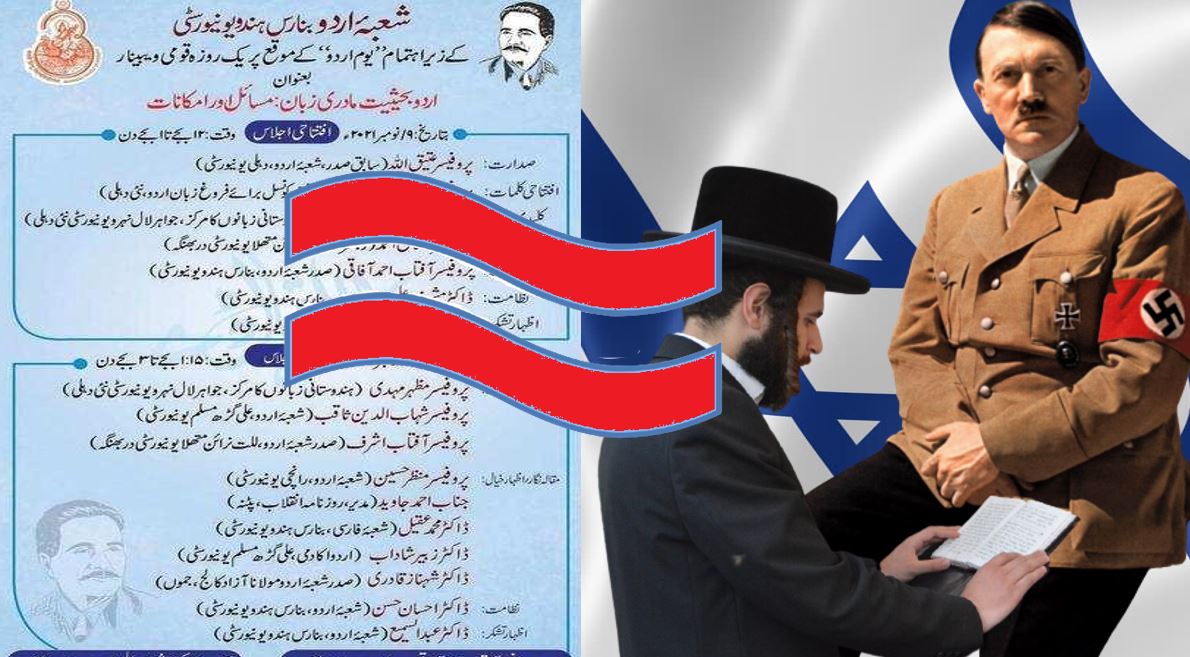 In an event organized by the Urdu department of the Arts Faculty of BHU, the students released a poster with the photo of Iqbal on the masthead.

In BHU, it is a tradition to use the photo of Pandit Malaviya on the masthead. But, the Urdu department happily gave that place to Iqbal, who proposed the two-nation for the first time.

BHU public relations officer Rajesh Singh said: “Today, on the occasion of Urdu Day, a webinar was scheduled to be held by the Urdu Department. Department head Aftab Ahmad shared an e-poster on Facebook from the department’s official handle on Sunday. (It) had poet Allama Iqbal’s photo.” Singh said opposition to the poster started Monday evening, with some commenting on social media that it did not have Malaviya’s photograph.

On Monday, Singh said, ABVP students held a protest and submitted a memorandum to BHU officials. “We formed a committee to probe the matter. We also issued a warning letter seeking a clarification from Ahmad about how he shared a poster without consulting the Arts Faculty dean and other senior officials.”

Later the department tweeted that the poster with Iqbal’s photo was an ‘inadvertent mistake’. The official handle of BHU Dean of Arts Faculty tweeted, “Urdu Department, Faculty of Arts, BHU, is organizing a webinar as per details given in the poster. Sincerest apologies for the inadvertent mistake in the earlier poster that went viral on social media.”

Urdu Department, Faculty of Arts, #BHU, is organizing a webinar as per the details given in the poster. Sincerest apologies for the inadvertent mistake in the earlier poster that went viral on social media.@bhupro @VCofficeBHU pic.twitter.com/loGvXe99IU

Muhammad Iqbal, who penned the “Saare Jahan se Accha” song in the first phase of his life, became a hardcore Islamist after he returned from Europe with a Ph.D. While many associate Iqbal with the song only, not many know that he was the first one to conceive a separate nation for the Muslim populace.

Iqbal’s grandparents were Kashmiri Pandits, and his father ‘Rattan Lal’ served as a revenue collector who was accused of siphoning funds. The then Afghan governor in Kashmir gave him a chance to become a Muslim with the other choice being hanging. The wise Rattan chose life and married a Muslim lady named Imam Bibi, a Sialkoti Punjabi.

As is the norm, the first-generation offspring became more fundamentally Islamic than the originals – the zeal of a fresh convert, as we like to call it. Soon, Muhammad Iqbal became ‘Allama Iqbal’ and was the first to seek a ‘separate country’ for the Indian Muslims.

It was on the 29th of December in 1930, that Iqbal spoke about the need for a separate Muslim nation, in the Presidential Address in the 25th session of All India Muslim League in Allahabad. He laid foundations, by distinguishing between Christianity and Islam.

Iqbal believed that religion has the utmost importance in the life of individuals as well as states, and that Islam in itself is destiny. Iqbal was convinced to preach nothing but original ‘Arabic’ Islam to the masses.

Iqbal also remarked that it was his duty, according to the teaching of the Quran, to defend their places of worship, if need be. He also stated, “Yet I love the communal group which is the source of my life and behaviour; and which has formed me, what I am, by giving me its religion, its literature, its thought, its culture, and thereby recreating its whole past as a living operative factor, in my present consciousness”.

Iqbal linked culture with communalism and expressed, “…without full cultural autonomy, it is difficult to create a harmonious nation. So, it is imperative to have an exclusive Muslim nation.”

Celebration of Iqbal’s birthday in an Indian university, that too in BHU, is like Tel Aviv University in Israel celebrating the birthday of Adolf Hitler. While such an event would not even be imagined in Israel, but in India, the Islamist supporters of Iqbal are openly rubbing salt in the wounds of India’s partition.

Replacing the place reserved for Pandit Malviya with Iqbal is a cruel joke on Malaviya ji, and the faculty as well as the students of the Urdu department of BHU must be punished appropriately.

Dhruva: Meaning the name and its Significance

‘We don’t debt trap countries,’ India rips a hole into China’s ego at the UNSC