The onslaught on Hindu culture by liberals continues unabated. For people who have begun making a living out of sexualising the sacred festival of Navratri, everything is now achievable. So, fashion designer Sabyasachi – who serves a certain class of Indians alone has now launched a dispute against mangalsutras. This has not been done in the expected liberal way of shunning the mangalsutra and calling it a sign of inherent societal patriarchy. Instead, the designer has sought to associate the mangalsutra with raw sexuality. Sabyasachi has launched what he calls the ‘Intimate Fine Jewellery’ collection, and the mangalsutra is his showstopper.

The official Instagram page of Sabyasachi released a series of pictures featuring models flaunting the brand’s newly launched mangalsutras. The promotional advertisement features heterosexual and same-sex couples posing for pictures wearing The Royal Bengal Mangalsutra. The promotional social media posts feature models posing solo or in intimate positions with others. In one picture, a female model is seen wearing a black brassiere and Sabyasachi’s mangalsutra as her head rests on a shirtless male model. 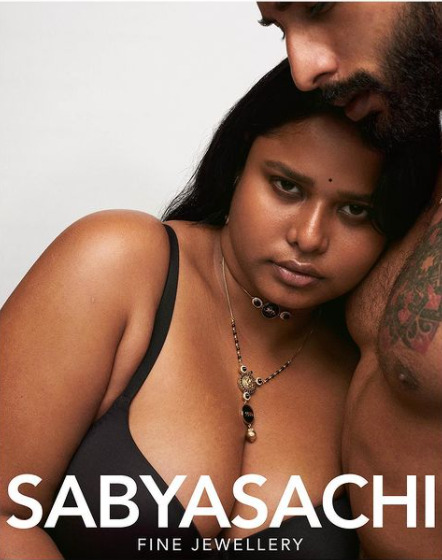 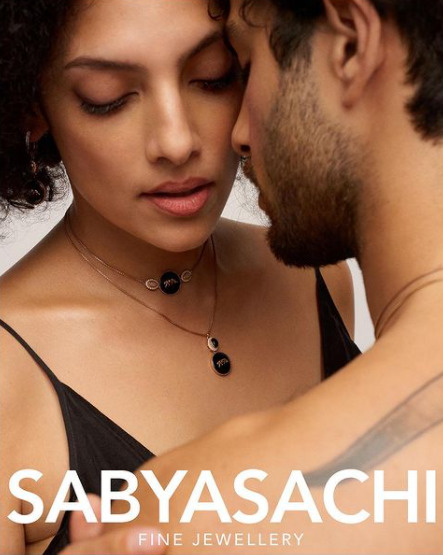 Interestingly, what Sabyasachi has launched as his mangalsutra hardly resembles the traditional and sacred neckless worn by women after their marriage. It is more of a chain and pendant. This is to suggest that Sabyasachi is perhaps calling a simple necklace a ‘mangalsutra’ only to pump up his revenues as the wedding season dawns upon India once again.

Nevertheless, netizens criticised Sabyasachi for using “semi naked models for a mangalsutra ad.” One user said, “I thought Sabyasachi launched his new lingerie collection, no no…that’s a mangalsutra ad. I’m so regressive, I didn’t notice.” Another remarked, “Really Sabyasachi?? What’s wrong with (you) these days? Who sell(s) Mangalsutra like this? If (you) have guts sell burkha, tabij in this manner. Stop Hindu discrimination.”

I thought Sabyasachi launched his new lingerie collection, no no..that's a mangalsutra ad.
I'm so regressive, I didn't notice. 😊 pic.twitter.com/ieRY4rrvcr

Really sabyasachi??
What's wrong with u these days,
Who sell Mangalsutra like this.
If u have guts sell burkha, tabij in this manners??
Stop Hindu discremation #Sabyasachi pic.twitter.com/KL2DiqDIAI

This is shameful Act @sabya_mukherjee

This is intentional hurting of Hindu sentiments

It's not a random piece of fashion jewellery, it indicates the love and commitment the husband and wife have towards each other. pic.twitter.com/HB3r4Aa4A4

That ugly looking pendant is what their mangalsutra is.

The mangalsutra is considered to be a soubhagya alankar of a woman. The mangalsutra continuously reminds a woman of her duties, her responsibilities and the blessing to be married. The mangalsutra reflects a sacred marital bond and does not promote sexuality. The objective of a mangalsutra is to remind a woman of the bond of marriage. It also reminds others of her marital status, and the need to respect her. Men should also remember the vow of fidelity towards the wife, and the mangalsutra serves as a reminder to both men and women to not defile the institution of marriage.

Mangalsutra is seen in Hindu culture by connecting it to the ‘suhaag’ of women, which is considered to be the most sacred. A Mangalsutra depicts a Hindu Marriage as the most sacred bond and it is not one to be sexualised. There is more to Hindu marriage than sex, it’s a marital bond of several births. So when someone tries to insult it, it is natural for people to get very angry. Especially when the women are pictured as half-naked wives of other men flaunting the mangalsutra like it’s some tattoo. It’s perverted and violates the pious institution of a Hindu Marriage. The Sabyasachi Ad normalises picturing women sexually while in their Mangalsutras and it’s the most horrendous of ad campaigns we have seen of late.

The mangalsutra is also considered a symbol of the bond of union between Shiva (husband) and Shakti (wife). In a mangalsutra, the gold symbolises Shakti, while the chain that ties the black beads symbolises Shiva.

The mangalsutra is, therefore, a sacred component of marriage for Hindus. That Sabyasachi, who earns a living by milking on marriages has decided to hurt Hindu sentiments is indicative of how a certain section of Indians have no respect for Hindu culture and traditions, and will go to any extent to pollute it.

As reported by TFI, Manyavar, an ethnic wear brand endorsed by the likes of Virat Kohli and Anushka Sharma in the past, decided to target Hindu marriage rituals in their new advertisement by using the activism trope. The ad specifically targeted the ‘Kanyadaan’ ritual followed in Hindu marriages.

The advertisement is seen portraying ‘Kanyadaan’ as regressive practice and as an alternative; the ad suggests that Hindus should start a ‘Kanyamaan’. The word ‘maan’ translates to respect in English.

Read More: Manyavar incites Hindus with a woke ad even as most of its customers are Hindus

Manyavar claimed that “Kanyamaan” was a progressive way of thinking as it highlights the idea of respecting brides instead of handling their responsibility to the groom’s family. Needless to say, the advertisement drew sharp criticism from the 21st century awakened Hindus, who are well aware of the tradition and its significance.

Safe to say, the public wasn’t bemused by the ad and took to the social media platforms to show its disgust for the ad.

Sabyasachi, along with two other fashion designers; Manish Malhotra and Ritu Kumar have landed in the Enforcement Directorate’s (ED) net in connection to a money laundering case. The agency was probing a case against AAP turned Congress leader and Bholath MLA Sukhpal Singh Khaira and had summoned the fashion designers concerning the case to answer a few questions regarding dubious financial transactions.

According to the ED, “We have information that Khaira paid money to the tune of several lakhs to the three designers in cash in 2018-19.” Reportedly, Khaira’s daughter, Simmer had got married in 2016 to Inderveer Singh Johal, the grandson of the late Darbara Singh, former chief minister of Punjab. The cash transactions that transpired during the wedding are allegedly in question.

Sabyasachi will therefore be advised to tread carefully here on.

South Africa was once debarred from Cricket over Apartheid, this time an anti-White apartheid has begun