Finally, India is getting its share of recognition in the International Gaming Sphere

Adorned with majestic set-pieces, embellishing artwork, interspersed with the perfect amount of Indian ancient history as gods and goddesses converse and carry the narration forward, Raji- an ancient epic should be the latest gaming rendezvous if you want to embark upon one.

The gaming world has a dearth of stories that reflect the Indian culture or the vast tapestry of stories it has to offer. However, Raji, developed by Nodding Games studios, delves deeper into Indian history and packs a punch with its surrealism. 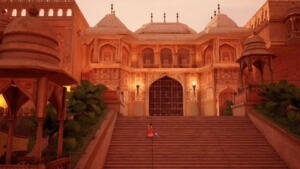 Right off the bat, the story is simple, protagonist “Raji” is a young girl who was chosen by gods and gifted with godlike powers to fight against demons who yield dominant power or mystical abilities that humans cannot match. However, the narrative and the visual delight in every scene that can be paused and framed is where ‘Raji’ truly elevates itself.

Avichal Singh, the co-founder, and designer at Nodding Heads in an interview with Sportskeeda remarked that the game, to a certain extent was a postmodernist re-telling of the Mahishasura Mardini.

“This particular story of the Mahishasura was a big influence on Raji’s story. Moreover, one of the first murals that were made and painted was of Mahishasura. So we heavily drew from that story,”

“We, as a team, felt there wasn’t any game in the industry that told great stories inspired by Indian culture. We really wanted to make a game about art, culture, and myths that we’ve grown up with; hence, the birth of Raji. Both Indian and Balinese mythology have so much in common, so we wanted to use that to come up with a unique universe that showcased these architectures, costumes, fighting styles, art, and storytelling mediums (like the Wayang puppet show) to tell Raji’s story.” said Ghosh.

The game was first released as a timed exclusive for Nintendo Switch on 18 August 2020 and released on 15 October 2020 for Microsoft Windows via the Steam client and the Epic Games Store, PlayStation 4, and Xbox One. However, in July 2021, the game was also released on Xbox Game Pass, meaning, if you’re in a country where Xbox Cloud Gaming works, you can actually play Raji on your mobile device.

What a wonderful day!

Today, we’d like to announce that Raji: An Ancient Epic is finally available on the @XboxGamePass!@Xbox players, are you ready to dive into the @rajithegame World?

Talking about expansion, Avichal added, “Moving forward beyond what’s next, we will be of course aiming for global success just like Raji. But this time around we will keep an eye out on the Indian market because when Raji launched all the Indian YouTubers gave a fantastic response. It was surprising we didn’t expect it and we’re going to keep an eye out and adapt to all the changes in the Indian ecosystem.”

The makers are looking to foray into the Japanese market in the near future. A booster shot of confidence came when Famitsu magazine in September acknowledged the success of the game by giving it a silver prize.

Raji: An Ancient Epic received the Silver Prize from @famitsu magazine in September!

We are grateful to the editors for their acknowledgment and we’re sure it will allow even more people to get acquainted with our brave Raji and her story!

The made-in-India epic, adventure, action game is still not on Android or iOS — two of the world’s biggest mobile gaming platforms but if the success and the open ending of the game is anything to go by, the game might soon be transitioning to the mobile platforms.

According to a market research group, Newzoo, currently, China is the world’s biggest video gaming market with an estimated 720 million gamers that generated revenues worth $44bn in the year 2020.

Meanwhile, the Indian gaming sector, taking baby steps reached $1.027 billion in 2020, a growth of approximate 17.3 percent from $543 million in 2016. While India is currently the fourth largest online gaming market globally, it sure has the legs to overtake everyone, especially after Xi Jinping’s brain fade of restricting anyone under 18 years old to gaming only three hours a week.

Half a billion population gaming market

As for India, online gamers in India are estimated to grow from 360 million in 2020 to 510 million in 2022. Mobile gaming takes the largest chunk of the gaming market thanks to access to affordable smartphones growing at 15 percent year-on-year for the past five years in India.

Moreover, the high internet penetration rate and low cost of the internet, courtesy Jio, has played a major role in driving the online gaming sector in India.

According to news reports, the first nine months of 2020 saw India rise to the number one spot in mobile game downloads worldwide, clocking 7.3 billion installs and raking in a 17 percent market share of the installs volume.

Read More: Jinping’s gaming crackdown is a knockout punch for China’s e-gaming industry and a big boost for India

The coronavirus pandemic has further drifted the populace from televisions to the screens of their mobile phone, laptops, tablets, and PCs for gaming. The casual gaming market represents 14.87 percent of the total Indian gaming market.

The Make-in-India success of Raji will certainly motivate other indigenous indie studios to come up with such products that will truly represent India on the global map.

Do you also feed Pigeons? Well! Stop right away