HOME » Politics » Opinions » China has a new deal for India: The Indian Ocean is yours, but please let us have the South China Sea

China has a new deal for India: The Indian Ocean is yours, but please let us have the South China Sea

China has accepted its status as a green-water navy incapable of exercising influence beyond its littoral zones. A latest report published by Global Times, a Chinese Communist Party (CCP) mouthpiece calls India the “most powerful country in the Indian Ocean,” even as China accepts its defeat in the Indian Ocean Region where Beijing was trying to compete with New Delhi for greater influence.

The latest Global Times report is at loggerheads with a 2017 report in which the CCP mouthpiece had called Indian military drills in the Indian Ocean “irresponsible and a violation of International Law.” The change in Chinese narrative comes amidst signs of India’s rising influence in the South China Sea. Far from targeting the Indian Ocean, China now wants to pursue a reduced goal of protecting its illegal claims in the South China Sea. 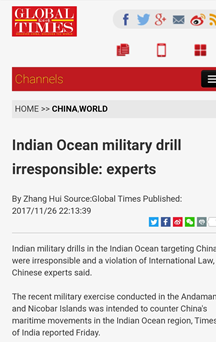 The change in Chinese propoganda is actually a function of changing equations in the Indo-Pacific. When the 2017 report was published by Global Times, Beijing was trying to use the Chinese People’s Liberation Army Navy (PLAN) for power projection and carrying out expeditions far away from China’s baseline.

The discussions in 2017 also revolved around China’s String of Pearls- a strategy to surround India in the IOR with strategically located ports in countries like Pakistan, Sri Lanka, the Maldives and Bangladesh. Within the Maldives, a pro-China President Abdulla Yameen was spoiling the long-standing India-Maldives relations, while pushing his country closer to the Dragon.

Also, Beijing was looking to build the Kra Canal- cutting through the isthmus of Kra in Thailand which would have allowed the PLAN to access the IOR without getting choked in the Strait of Malacca- a narrow chokepoint connecting the Indian and Pacific Oceans.

And in 2017, Beijing was almost assured that no one would challenge its unilateralism and hawkishness in the disputed waterways and hotly contested geographical features of the South China Sea.

However, India has turned the tables on China. Most of China’s port projects in the IOR have gone to the dogs. New Delhi has built its own ‘Necklace of Diamonds’. With strategically located ports like the Chabahar port in Iran and Sabang port in Indonesia, India has achieved counter encirclement of China’s ‘String of Pearls’.

In fact, Solih has spoiled Xi Jinping’s Maldives dream and has rather chosen to go ahead with the US and India. Therefore, the Global Times is now trying to save Beijing’s face by claiming that Maldives was never in China’s sphere of influence and that India is the one that should be concerned with whatever happens in the IOR.

Moreover, India has also pushed the envelope in the Western Pacific- a maritime region in which China perceives itself as a dominating naval power. Therefore, India has signed logistics sharing pacts with Washington, Tokyo and Canberra, and is also looking to finalise a logistics sharing agreement with Russia. This helps India in encircling China in its own strategic backyard, namely the East China Sea and the South Cutina Sea.

Moreover, India is also using its own strategic power in the IOR to threaten China’s illegitimate claims in the South China Sea. With the Kra Canal project getting scrapped, New Delhi has a brilliant opportunity to exploit Beijing’s ‘Malacca dilemma’.  This also explains India’s eagerness to militarise the Andaman & Nicobar Islands located close to the Strait of Malacca. India is showing that it can blockade the Strait of Malacca’s Western point at will which could jeopardise China’s trade routes and oil supplies in a rather catastrophic manner.

The Modi govt is set to amend the FCRA and it is going to hurt not just the conversion gang, but also Turkey and China

Given the enemies at our door, India’s defence budget is awfully low