by Akshay Narang
in Asia Pacific
1

China will permanently remain a green-water navy in the Indo-Pacific stuck with the “Malacca dilemma”. China is cornered from all sides in the South China Sea and no one, including China’s friends in the region, is coming up to help Beijing become a blue-water navy capable of exerting influence beyond its littoral zone. Beijing has now suffered a major blow from the China-friendly regime of Thailand.

As per Bloomberg, Thailand is looking to construct a land passageway bypassing the Strait of Malacca, effectively scrapping the Kra Canal project that China wanted to build in order to create a sea route alternative to the Strait of Malacca. To further aggravate China’s pain the Thai government has also buckled under public pressure, delaying the purchase of two Chinese submarines worth 724 million US Dollars.

Till now, China was pinning its hopes on the Kra Canal project, a proposal to construct a 120-kilometre mega canal cutting through the isthmus of Kra in Thailand, which would have helped it to find an alternative sea route connecting the South China Sea (Pacific) and the Indian Ocean.

This was in line with Beijing’s long-term ambitions to bypass the Strait of Malacca, a narrow chokepoint between the Malay Peninsula and the Indonesian island of Sumatra that divides the Indian and Pacific Oceans.

The Strait of Malacca is a major bottleneck in China’s global ambitions. 80 per cent of China’s oil supplies pass through the Malacca Strait, apart from forming its trade routes to the Middle East and Europe. But India’s geographical position is such that it can easily blockade the Western side of the Strait of Malacca. 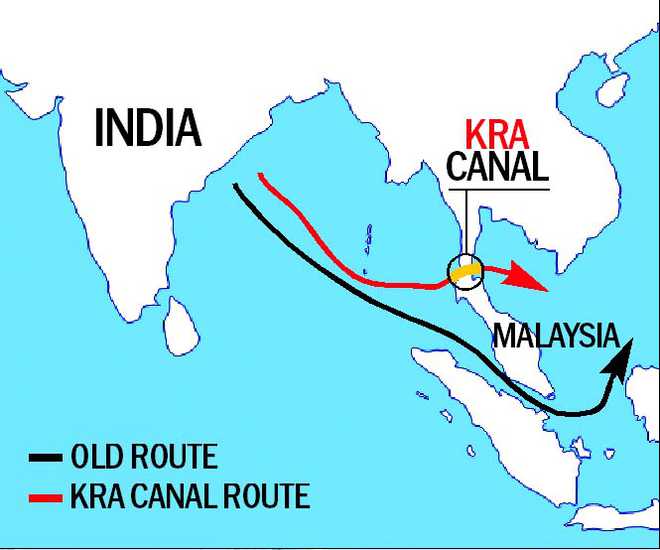 However, Thailand doesn’t seem to want the Kra Canal any longer. The reason is simple- the Canal project wasn’t economically or politically feasible.

The Kra Canal wouldn’t have turned out to be another Suez Canal or Panama Canal that have made countries rich. Success of Canal projects depend on their ability to cut short distances. Suez Canal and Panama Canal, for example, bypass entire continents and thus charge hefty fees from large ships- 2,50,000 dollars and 1,25,000 dollars respectively.

However, in case the Kra Canal was built, then additional fuel costs for alternate routes through the Malacca, Sunda or Lombok Straits would have been limited to 40,000 dollars to 1,20,000 dollars. This was not enough to justify the construction costs of the Canal project.

At a political level also, the project would have made no real sense for Thailand. It would have physically separated Thailand’s Malay Peninsula which would, in turn, have encouraged the ongoing insurgency in Southern Thai provinces. China wouldn’t have helped Thailand in such a situation, rather it would aided and abetted insurgents to take full control of the prospective Canal project.

It therefore doesn’t come as a matter of surprise that Thailand has decided to build two deep seaports on both sides of its southern coasts, and connect them through road and rail. Thailand’s Transport Minister Saksiam Chidchob has said that the 100-km “land bridge” would replace an existing project to dredge a Canal cutting through the isthmus. He cites environmental damage for ruling out the Canal project.

A “land bridge” would help Thailand in giving an alternative to the congested Malacca route, helping it become an international transit hub that could pull this ASEAN member State out of its economic woes.

If China thinks that it can exercise influence on both sides of Thailand’s Southern coasts to boost its presence in the Indian Ocean Region (IOR), then also it is certainly mistaken. Thailand has shelved a deal to buy two Chinese submarines alongside its decision to scrap the Kra Canal project.

According to Government spokesperson Anucha Burapachaisri, who also serves as Thailand’s Defence Minister, has asked the Royal Thai Navy to put off the deal till the fiscal year 2022. The deal to buy two Chinese submarines was approved by a Thai Parliamentary Sub-committee on August 22, by the narrowest margin through the Chairman’s casting vote.

But the submarines deal worth 724 million US Dollars drew a lot of public outrage amidst Thailand’s struggle to save a free-falling economy. Yutthapong Jarassathian, Deputy Chairman of the subcommittee from the opposition Pheu Thai Party has been quoted by Asia Nikkei as saying, “The Prime Minister must choose between the submarines and the economic survival of the people.”

Public outrage took grip of Thailand and #PeopleSayNoToSubs started trending on Twitter. Clearly, the public pressure invovled pushed Thailand government to let go the Chinese submarines even when it really wanted to buy them.

China has lost all its friends in the Indo-Pacific region. Goverments are usually anti-China, and even if the governments are pro-China, the people of these countries are such that governments are not allowed to help China. Thailand itself for example is a part of the Milk Tea Alliance- an online democratic solidarity movement run by internet users from Thailand, Taiwan and Hong Kong.

It doesn’t therefore come as a surprise that the people of Thailand harbour a strong anti-China sentiment. This is why China is getting marginalised in this Southeast Asian nation. And due to the growing public pressure, China could also find itself ruled out from the land pathway project which Thailand is considering as an alternative to the Kra Canal project.

Thailand has therefore given two very severe blows to China. And now Beijing is back to handling the “Malacca Dilemma” all by itself.

‘They are derailing the investigation,’ Maharashtra may witness another cover-up in Palghar Sadhu lynchings case

Huawei takes its last breath as it exits the smartphone sector. This spells the end of China’s tech industry