HOME » Geopolitics » Asia Pacific » China kept manufacturing ships to encircle the Indian Ocean, now most of its ports have been seized

China kept manufacturing ships to encircle the Indian Ocean, now most of its ports have been seized

Sink some to make space, thank us later

China now has the largest navy in the world and is aggressively looking to set up more logistical facilities in the Indo-Pacific in order to enhance its strategic reach, a detailed Pentagon report has revealed. The Pentagon has also said that China is looking to double the number of its warheads over the next ten years.

So, does the Chinese PLA Navy (PLAN) enjoy an upper hand over the US and Indian Navies? It doesn’t seem so. A large Navy doesn’t ipso facto mean a Navy with greater capabilities and the bigger size of a navy doesn’t on its own make it more powerful.

What else do we need apart from the monotonous count of the number of naval assets? Ports. Because what good is a navy warship, if there is no port to dock it in. Also, the US Navy and the Indian Navy remain qualitatively stronger than the Chinese PLA Navy both in terms of machines and the men or the women behind the machines.

Take the Indian Ocean Region (IOR), for example, China was trying to build a number of ports-cum-military bases here from Pakistan to India’s West to Maldives and Sri Lanka to India’s South, and Myanmar and Bangladesh to India’s East. Beijing’s intention was to build gigantic but economically unviable ports which ultimately fall in the PLA Navy’s lap upon due to ‘debt-trapping’ and get militarised. This was christened China’s ‘String of Pearls’ strategy. 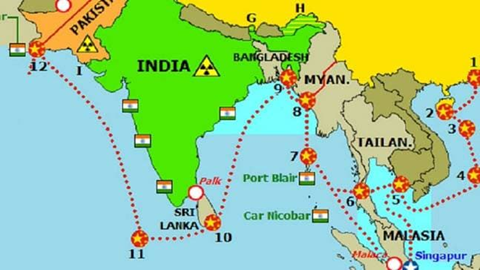 But what happened? Today, Myanmar and the Maldives have developed cold feet about China. Myanmar, a close ally in India’s ‘Act East policy’ is clearly desisting from making any commitment towards the China-Myanmar Economic Corridor (CMEC), which is part of Xi Jinping’s flagship Belt and Road Initiative (BRI). Therefore, the Chinese cannot simply go about building a naval base and militarising its Kyaukphyu SEZ project in Myanmar.

The Maldives too has gone India’s way with President Ibrahim Mohamed Solih choosing India over China. Beijing has to give up on its port-building plans in the Maldives, eliminating another option for China in the IOR. Sri Lanka too has become more careful about China after the ‘Hambantota’ effect. Now, Sri Lanka President, Gotabaya Rajapaska, who has shown a lot of goodwill towards India, will not let China militarise Hambantota or any other part of Sri Lanka for that matter.

Bangladesh remains India’s close friend and India will not let Beijing make Bangladesh another Pakistan on India’s East. Islamabad remains the only regime which allows itself to be strongarmed by China. But Beijing’s Gwadar port and CPEC plans are themselves fraught with a number of issues, as Baloch freedom fighters won’t let Pakistan part away with their territory to China.

Also, China’s ambitions of building a Canal in Thailand’s Isthmus of Kra haven’t materialised. Therefore, China remains walled out of the IOR with the narrow Strait of Malacca being the only pathway for China. This route is also at the peril of the Indian Navy which can blockade the Malacca Strait at will.

Back home in the Pacific also, China doesn’t have much to boast about. It has no friends in its strategic backyard- the Western Pacific. Malaysia, the Philippines, Vietnam, South Korea, Australia, Papua New Guinea and Japan- all strategically placed countries are China’s maritime foes in the Western Pacific. Therefore, China cannot build any strategic reach into the Greater Pacific region.

Therefore, despite being possibly the ‘largest’ Navy, China cannot exercise influence anywhere except the Western Pacific. The “First Island Chain” stretching from Japan through the Philippines to Indonesia blocks China in the East and the narrow Strait of Malacca blocks in the West.

As a result, China keeps building artificial Islands and military instalments in the South China Sea. It has to station its growing naval forces somewhere, which are getting encircled by the bigger powers like the QUAD- an informal strategic alliance comprising India, Japan, Australia and the US.

What the Pentagon report seems to have assessed and revealed is bare numbers such as long-range missiles and submarines. What the report doesn’t tell us is that China has just one overseas military base and that too in Djibouti, which is at one corner of the Indo-Pacific in the Horn of Africa.

By contrast, the US has multiple naval and air bases in Guam, Japan, South Korea, Diego Garcia and the upcoming Lombrum naval base at Papua New Guinea’s Manus Island. And we are not even discussing Washington’s Intelligence sharing and logistics sharing pacts with countries like India in the region.

The US Navy has much more logistical capacity than the Chinese Navy. Moreover, China may have more warships than the US but the Eagle still has much more firepower than the paper dragon. Many of China’s ships are actually frigates and corvettes. The US still has far 105 aircraft carriers and destroyers as against China’s 39. The American warships are larger and more powerful than their Chinese counterparts. As such Washington is tipped to win any naval confrontation with China in the near future or for the next twenty years.

Even with the other big Indo-Pacific power, the Indian Navy, China doesn’t really pack a punch. Indian warships might be vastly outnumbered by China, but again India is a blue-water navy that can enter and exit the South China Sea at will, as it did recently. On the other hand, China cannot enter IOR without India’s scrutiny.

China faces a strategic disadvantage because its conflict zones in the Paracel Islands and Spratly Islands are located closer to India’s baseline. But if China has to engage the Indian Navy, then it will have to travel into India’s home turf where the Indian Navy enjoys “interior lines”. In a conflict situation, the defender has a better chance, when the aggressor has to travel longer distances. The Chinese Navy might be bigger, but the Indian Navy is far more powerful in a strategic manner.

The Chinese PLA Navy can keep adding to its naval assets, but as long as it is confined to its littoral zone, it cannot really do anything. Chinese ambitions of power projection remain a far cry. Therefore, China might be the biggest Navy, but it shouldn’t be confused with the most powerful.

‘Why play Chinese games when India can make its own,’ PM Modi strives to revive India’s Video Game industry

What turned Macron from a left-wing politician to a supremely right-wing leader?