China’s biggest geostrategic fears are coming true as India is now boldly using its strategic location at the Strait of Malacca to hurt China in the South China Sea. Two Indian Navy warships have reportedly set sail to join the US Navy destroyers deployed in the South China Sea. The Indian Navy has also mobilised its assets along with the Indian Ocean Region (IOR), especially at the Strait of Malacca- a narrow chokepoint dividing the Indian and Pacific Oceans.

The Indian Navy has been active since the Galwan Valley bloodbath. ANI has quoted government sources as saying, “Soon after the Galwan clash broke out in which 20 of our soldiers were killed, the Indian Navy deployed one of its frontline warships to the South China Sea where the People’s Liberation Army’s Navy objects to the presence of any other force claiming the majority of the waters as part of its territory.”

This is a big statement of intent coming from India. New Delhi is making it clear that if China doesn’t stop messing in the Himalayas, then it will have to face consequences in the Indian Ocean and the South China Sea. India can confront China in the South China Sea just like the United States.

The Indian Navy can go a step further and create a blockade situation at the Strait of Malacca, which would immediately block Beijing’s oil supply lines and trade routes through the Indian Ocean Region (IOR).

The Indian Navy manoeuvres have sent the tough message across and seem to have taken Beijing by surprise. It has been reported that the immediate deployment of the Indian Navy warships after the Galwan Valley bloodshed rattled the Chinese Navy and security establishment, as they complained about the presence of India’s warship during diplomatic talks with New Delhi.

Sources have further revealed that during the deployment, the Indian Navy warship had maintained contact with the American frigates and destroyers, stationed in the South China Sea, over secure communication systems. This must also set alarm bells ringing for China’s security establishment, as the Australian Navy has already been ganging up with the US Navy in the highly contested waterways.

Now, India is also cooperating with the US Navy in the South China Sea and before Beijing even understands what is happening, Japan might also join in with its three Indo-Pacific friends and eventually the entire QUAD could encircle China in its own littoral zone.

As for India, entering the South China Sea brings two major strategic advantages. Firstly, it bolsters India’s ties with Southeast Asian countries like Vietnam and the Philippines who want New Delhi, an influential Indo-Pacific power, to play the role of a force multiplier in the disputed waterways of the South China Sea and halt Beijing’s expansionism in the contested waterways.

Secondly, the Indian Navy’s presence in the South China Sea creates a strong deterrent against Beijing in the Himalayas. India is willing to increase the sheer costs and risks associated with infiltrations and transgressions into its soil.

China will now have to think twice before going ahead with salami-slicing tactics in India’s Ladakh or Arunachal Pradesh. An active Indian Navy in the Indo-Pacific is China’s worst nightmare. Moreover, India is becoming an even stronger Navy with its militarisation plans in the Andaman & Nicobar Islands from where India can single-handedly block Chinese shipping routes into the Indian Ocean. 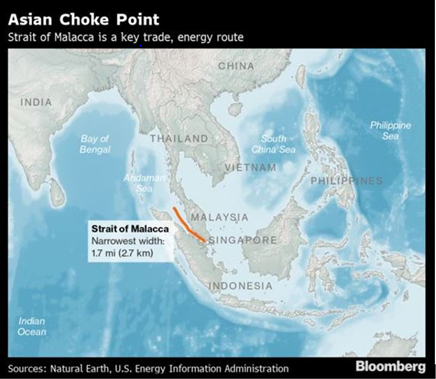 India is reminding Beijing that 80 per cent of China’s oil imports also pass through the Malacca Strait. If things escalate between India and China, New Delhi can therefore bring Beijing to its knees even without firing a bullet. And we are not even considering the amount of trade that China’s export-based economy will stand to lose if the Indian Navy simply sits on the Western point of the Malacca Strait.

The Galwan Valley bloodbath reaffirmed that the Indian Army can give the PLA a bloody nose at will. But the Indian Navy can do the kind of damage that would go far beyond China’s security establishment, and in fact, shake the very foundations of the Chinese State and economy. With its Malacca and South China Sea manoeuvres, the Modi government has thus given a loud and clear message to China- hold back in the Himalayas, if you don’t want to get pummelled mercilessly in the Oceans.

‘Build a fortress, attack Buddhism,’ China is afraid of losing Tibet as India, US, Taiwan stand with the Dalai Lama