As India ramps testing to stimulate the fight against COVID-19, the growth of active cases has come down to as low as 1.7 percent, so doubling in 41 days. The positivity rate has remained in single digit in most of the states except Delhi and Maharashtra.

Testing capacity has gone up exponentially with 1.9 Lakh samples tested in the last twenty-four hours and the number of daily tests is expected to cross 2 lakh soon. Out of 1.9 lakh samples tested yesterday, 14,516 were found to be positive, thus putting positivity rate below 8 percent, or in single digit. 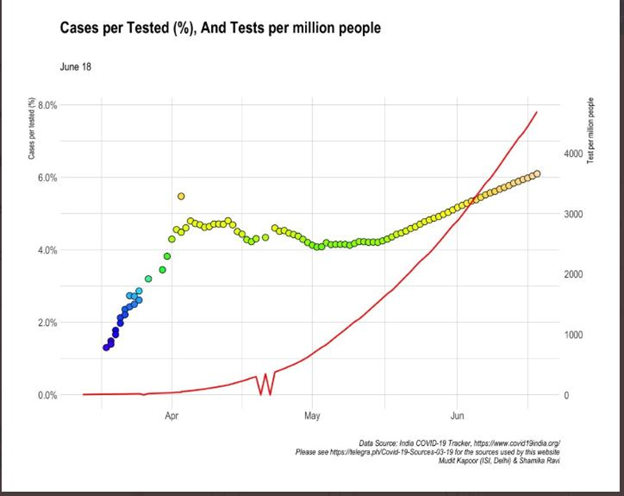 In the last 24 hours, more than 9 thousand patients have recovered from the disease, with Rajasthan having the best recovery rate followed by Madhya Pradesh. 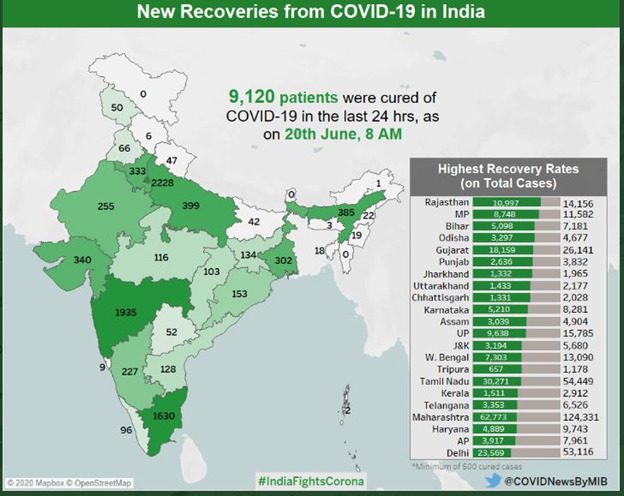 So far, India has tested more than 66 lakh samples, and 3.95 lakh of them were found positive. Out of the 3.95 lakh positive cases, 2.13 lakh have already recovered while 1.68 lakh are currently active, with around 13 thousand deaths. 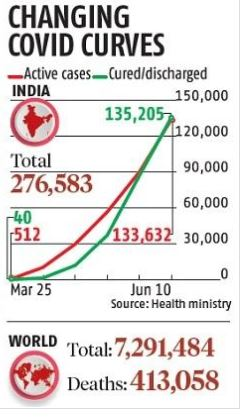 Recovery rate in India currently stands at 54 percent, far better than any other country with a large number of cases, and the death rate has been among the lowest in the world. Health ministry credited better management of the pandemic for high recovery and low number of deaths. 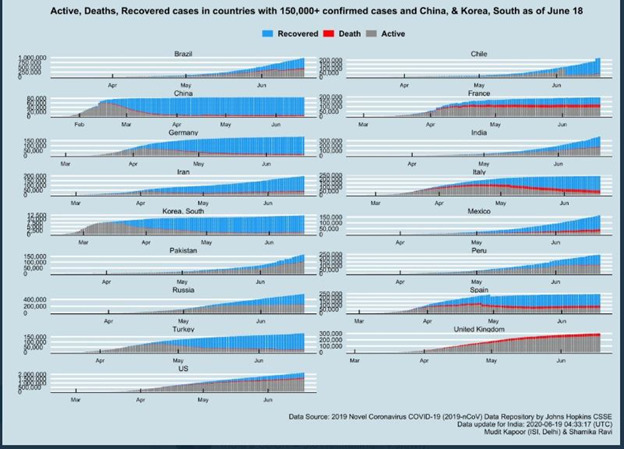 As one can see in the graphic above, taken from Shamika Ravi’s daily update, India is on the path to flatten the curve. And, the curve is expected to be on a downward slope in the next few days.

Low growth in the number of active cases means Indian would not have to worry about bed or ventilator shortage, and every patient would receive good care, thus bringing death rates lower. “More patients getting discharged is a good sign. It will free up more beds for patients in need of admission,” said E Sreekumar, chief scientific officer, Rajiv Gandhi Centre for Biotechnology.

According to many experts, including Shamika Ravi, India’s foremost Covid-19 statistician, the death rate is the metric to focus on, as the number of lives we can save amid is what matters most.

“The government needs to focus on preventing deaths. If the fatality is 5 per cent, then 95 per cent should recover. This distinction between active and recovered cases is baffling,” said Jacob John, virologist and former chairman of Indian Council of Medical Research.

India’s Covid-19 fight is on the right path, except in few cities like Mumbai, Delhi, Ahmadabad and Hyderabad, which are still reporting large of cases. The union and state governments need to focus on these areas to bring the number to further improve recovery and minimize the number of new cases.

Xi Jinping fears this American the most. And it is not Donald Trump. It’s Mike Pompeo