No Result
View All Result
Newswire
NZ vs WI: Grandhomme ruled out of Tests; Santner to lead in final T20I 35 mins ago
Dortmund ease past Brugge in Champions League 50 mins ago
New Zealand’s Greg Barclay elected new ICC chairman 1 hour ago
Two Gujarat policemen discharged in fake encounter case 1 hour ago
Biden declares his administration ‘ready to lead the world’ 1 hour ago
I have lost a comrade, colleague and friend: Sonia on Ahmed Patel’s death 1 hour ago
Next
Prev

Media must be more responsible

A horror show transpired at the Bandra Railway station in Mumbai, when thousands of migrants gathered outside the railway station at a time when social distancing is indispensable if India wants to avoid several thousand deaths that the Wuhan virus can cause.

It was clear that the huge influx of migrants was caused by rumours about resumption of rail services from April 14, the last day of the 21-day lockdown that has further aggravated the Coronavirus outbreak in the Maharashtra capital.

Now, the source of the rumours that reduced the Bandra railway station into a ticking time bomb is being traced down to ABP Majha. The Marathi news channel ran a story stating that train services ferrying passengers would resume from April 14. But this news report clearly turned out to be fake.

On Wednesday, the Maharashtra Police also detained the concerned ABP Majha reporter Rahul Kulkarni from Osmanabad for spreading fake news. Even a video of the ABP Majha report has gone viral which could have led to thousands of migrants gathering at the Bandra railway station.

ABP Majha had reported that railways are likely to resume service for stuck migrant workers to get back to their villages. It is believed to be one of the reasons why so many gathered at Bandra. pic.twitter.com/TlJxEQCsEZ

ABP Majha report is particularly misleading and baseless given that it claimed resumption of rail services from April 14 which is rather improbable. Prime Minister Modi had announced the 21-day lockdown, which was to originally end at April 14 midnight before it was extended further.

How could the Indian Railways have decided to recommence services from April 14 when a nationwide lockdown was supposed to be in force till April 14 midnight?

But ABP Majha is not the only media outlet running such outrageously misleading and fake reports, even other media outlets had claimed that the railways would resume rail services from April 15- a day after the 21-day nationwide lockdown came to an end.

Take a look at these two screenshots of Business Standard and India Today stories on April 4. This news report was actually retrieved from the Press Trust of India (PTI). 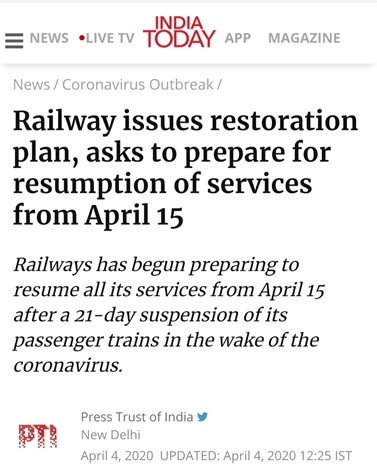 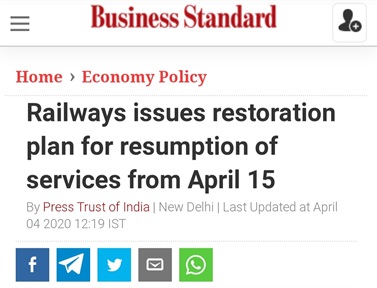 Did the Railways announce any plan to resume rail services from April 15? No, this was again fake news that cited “sources” within the railways to claim that the Indian Railways would start functioning again from April 15, which could have fuelled even more chaos at several other stations apart from the Bandra railway station in Mumbai.

Live Hindustan too published a story dated April 10 that claimed that trains were ready to start running again from April 15, if a go-ahead comes from the top political leadership. Again such reports can potentially cause unnecessary panic and trigger chaos.

It is utterly ridiculous that such irresponsible stories were published that can land huge crowds of migrant labourers at railway stations across the country.

Live Hindustan published this report on April 10, while the Indian Railways had on April 9 denied all such media reports about resumption of rail services from April 15.

A single patient can cause set in long chains of the Chinese virus, breaking which could prove an uphill task. It doesn’t take much time and effort to write stories about resumption of rail services relying upon anonymous “sources”, but such reports can lead to dire consequences.

The Indian Railways has now tweeted, “It is clarified that all Passenger train services are fully cancelled, across the nation, till 3rd May 2020 and there is no plan to run any special train to clear the passenger rush. All concerned may pl.take note of the same and help us in resisting any wrong news in this regard.”

It is clarified that all Passenger train services are fully cancelled, across the nation, till 3rd May 2020 and there is no plan to run any special train to clear the passenger rush

All concerned may pl.take note of the same and help us in resisting any wrong news in this regard

Newspaper outlets and news channels have no right to spread rumours and publish speculative pieces in the name of freedom of speech and expression that can create Coronavirus clusters throughout the country, with inter-state migrants coming directly in the line of fire.

In fact, in times like this, media outlets are bound to take special care to ensure that rumours and fake news don’t spell toruble for the country with more Chinese virus hotspots.

The authorities must initiate action against media outlets publishing unsubstantiated reports and rumours. Every single media outlet acting like ABP Majha must meet the same fate as the news channel that triggered the Bandra migrant crisis.

When all other sectors are expected to crash, Agriculture will drive the Indian economy in 2020

Raghuram Rajan is back again to conceal his failures. This time he is after the bank liberalisation policy of Modi govt

With an eye on China, Jaishankar is using the Sri Lanka formula in Seychelles

Mamata was already dealing with the BJP threat, now she has to shift focus on Owaisi’s AIMIM