The automobile sector in India is undergoing structural slowdown with demand reaching new low in last few months. The domestic passenger car sales have fallen by 29.4 percent in the first five months of the ongoing financial year and the sale of two wheelers declined by 14.85 percent. But there is a silver lining in this story of slowdown.

In order to balance the domestic slowdown, the automobile manufacturers have aggressively pushed exports. There are many developing countries like Brazil, African countries, and Malaysia whose automobile demands are similar to that of Indian consumers.

Amid the domestic slowdown, the manufacturers pushed for exports and this resulted in 6.52 percent growth in passenger car sales and 4.52 percent in motorcycle sales. The growth in exports comes in the backdrop of slowing automobile demand across the world, and negative growth auto export powerhouses like Germany.

In two wheelers segment, the share of exports in total sales grew from 13.12 percent in first five months of the last year to 15.63 percent in ongoing year in the same time period. Exports accounted for 19.94 percent of total sales of passenger cars in last year while in this year, the share rose to 24.22 percent. Therefore, almost a quarter of automobile industry’s total sale is coming from global markets. 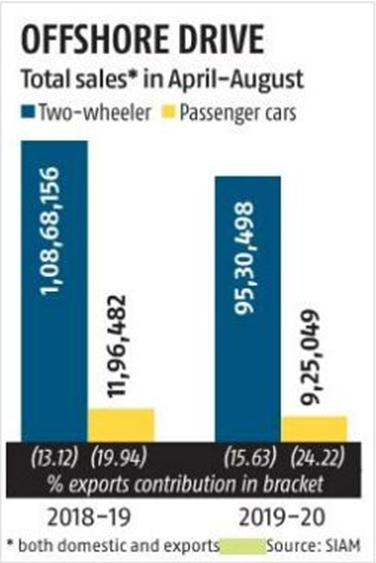 The surge in exports was helped by fall in international value of Rupee and Modi government’s Make in India policy. In last few years, the companies upgraded their plants in India to make them flexible to cater the demand in other countries.

Almost all the automobile majors registered growth in number of units sold in foreign markets. Mahindra & Mahindra led the exports drive with 42.3 percent in January to August period while other car makers Nissan (27 per cent increase), Toyota Kirloskar (21 per cent) and Volkswagen (7.3 per cent) also registered a healthy growth.

Hyundai Motors, the largest automobile exporter shipped 122,518 units compared to 105,768 units in last year, a 15.84 percent growth. The Chennai unit of Hyundai Motors serves the countries across Africa, West Asia, Latin America, Australia and Asia-Pacific which constitutes for 91 percent of the countries served by the South Korean multinational.

The two wheelers segment which is divided in scooters and motorcycles registered a strong growth in exports while the domestic sales decline for all companies.

TVS Motor Company which exports two wheelers to 60 countries, registered 5 percent decline in domestic sales while 6.4 percent growth in exports in April-August period. The contribution of exports in total sales rose from 21 percent to 24 percent. Yamaha Motor India, Piaggio and Suzuki also expanded their global footprints in the global market.

According to an article in Business Standard, “Exports bring in a considerably bigger margin for manufacturers compared to domestic sales. Exports typically fetch 15-25 per cent margins, while in domestic market it is 11-13 per cent.”

The Indian automotive industry has become the fourth largest in the world with 9.5 percent increase in 2017. The country is also the seventh largest manufacturer of commercial vehicles in the world. The export of commercial vehicles brings lot of foreign exchange in the country and the automobile exports is being seen as the next big thing in the country because export to other developing countries like Mexico, South Africa whom requirements are similar to that of India are importing in large numbers. In 2014, the largest importers were the United States, Mexico and South Africa. 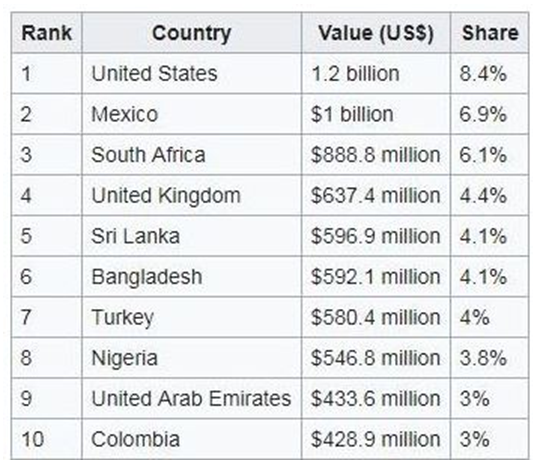 India is becoming a hub for automobile manufacturing for the consumption of developing world. The country is now the second largest Research and Development (R&D) center in this industry. We can get a basic idea of the exponential growth in this sector in the following example The Indian R&D setup for Mercedes-Benz has metamorphosed from a tiny division with 20 staffers in Bangalore, the IT capital of India, a couple of decades ago into a powerhouse of 5,000 engineers that is contributing significantly to new-age technology. The company is already preparing to double its office space as the scope of work expands significantly.