HOME » Politics » Opinions » As India praises PM Modi for consoling the ISRO chief, Liberals make it a debate about ‘manhood’

As India praises PM Modi for consoling the ISRO chief, Liberals make it a debate about ‘manhood’

by Yash Joshi
in Opinions
1

The image of Dr K Sivan in tears moved almost every Indian and it was a heartbreaking moment for the entire country. The events were keenly watched by Prime Minister Modi at ISRO headquarters in Bangalore and when the events took a turn for the worse, Prime Minister Modi displayed his leadership qualities and handled the situation with grace and poise. From his impromptu speech to his hug which consoled Dr Sivan, the Prime Minister completely took charge of an emotionally charged event and motivated the ISRO scientists and asserted that India will create history sooner rather than later.

ISRO has made some great strides and launched numerous programmes ever since PM Modi assumed power and helped India stand shoulder to shoulder with the likes of USA, Russia and China. Space is soon going to be a trillion-dollar industry and PM Modi on his part has backed ISRO in totality which was evident with his presence in the ISRO headquarters on the eve of ISRO’s attempt at conducting a soft-land on the lunar surface’s south pole. The events that unfolded soon after the attempted landing were emotionally charged and that’s when the Prime Minister stepped in to encourage the scientists and the country. His hug to console a crying Dr Sivan resonated with the entire nation and echoed the feelings of every Indian – we all wanted to console Dr Sivan and commend him and his team for their tremendous efforts. The Prime Minister won hearts with such a classy, level-headed gesture and he lent his shoulder for Dr Sivan to cry who was carrying the hopes of 130 crore Indians. The Prime Minister too would have been hurt as the success of this mission would have definitely propelled India’s status to a superpower but he just absorbed everything in the moment of grief and consoled the entire nation and spread optimism through his impromptu speech. It is often said that the truest test of leadership comes in the times of adversity and it is safe to say that the Prime Minister passed this test with distinction as his speech was praised from all quarters with Dr Sivan asserting that PM Modi is a source of inspiration and motivation for everyone at ISRO. Dr Sivan was moved by one particular phrase in the Prime Minister’s speech where he said: “Science should not be looked for results, but for experiments and experiments will lead to results.” The Prime Minister put up a courageous front and acted as a guardian by showing his magnanimity – something which will never be taught at Harvard or Cambridge University.

The Prime Minister’s move got widespread appreciation from the who’s who of India, even persoanlities that may not agree with Prime Minister Modi all the time.

Thank you for Encouraging all that and more sir. 🇮🇳🙏❤️ https://t.co/QQxUVe1vpA

Dear PM @narendramodi ji!! Your speech at @isro will remain one of the most inspirational speeches ever. Your affectionate and emotional hug to #Isro Chief K.Sivan is a visual that will be etched in every Indian’s memory for years. You make us feel protected. Thank you.🙏🙏🇮🇳 pic.twitter.com/XMf1f7Dyxs

Really feel for @isro Chairman Sivan here
You can feel the pain of the hard work he and his team must’ve put in
Wonderful of the PM to show support
And now I have something in my eye I think
Do you? 😢 https://t.co/dhxBNWsDfT

The compassionate and assuring and encouraging fatherly hug to ISRO scientists is etched forever on the heart and mind of India 🇮🇳. Thanks 🙏 @narendramodi ji for making us feel safe.

I think @narendramodi hug of a heart broken @isro chairman was a group hug of a billion plus people. A very fine gesture. And just what was needed. To criticise and politicise even this as some are doing is to deny any transcendental moments for the country to unite as one #ISRO

In a welcome development, people like Sonam Kapoor Ahuja  and Barkha Dutt who are known critics of PM Modi decided to leave politics behind and praised PM Modi for his kind gesture.

However, some petty and small minds attempted to politicise the little gesture of PM Modi’s hug to console Dr Sivan. It seemed that they couldn’t gulp that the entire nation was praising PM Modi for his conduct and started working overtime to ensure that the Prime Minister’s actions are discredited at any cost even if that meant criticising Dr Sivan for breaking down after Chandrayaan-2’s failed attempt to land on the lunar surface. Let’s take a look at some of the most cringe-worthy tweets that took Modi-bashing to a new low:

In this cropped video, the Prime Minister is trying to be showcased in a poor light as since there were no cameras, the PM didn’t remember to console Dr Sivan. The hug and the console were a spontaneous gesture and it just shows how morally corrupt the admins of such pages are.

I was expecting better temperament from the @ISRO chairman. Failures happen and are stepping stones for the success ahead. ISRO's achievements and efforts are applauded by the entire world. A man of his stature crying like a baby because of shortfalls looks idiotic to me. pic.twitter.com/hLIlzBmlAP

But nothing can beat this tweet of Gaurav Pandhi who used to be affiliated with the Indian National Congress and showed his venomous bile by criticising Dr Sivan and subsequently calling his actions idiotic. In his thread, he called Dr Sivan to be unfit to lead ISRO just because he chose to display his emotions.  It seems that years of slavery and serving the Gandhis has corrupted his brain beyond repair. His tweets are further proof that Congress and its workers are good for nothing.

All of you may also kindly pay attention to the video from another angle which shows ISRO Chief was perhaps not crying so much, and was not even looking for a shoulder. It was Modi who created this little drama. https://t.co/xW8o5pLH2M

Sanjukta who is a writer at DailyO accused of Prime Minister of creating a drama. She is famous for writing an article which claimed Rahul Gandhi to be the anti-thesis of Modi and the perfect Prime Minister for the country and is regularly found to retweet tweets a handle which goes by the name “India is a terrorist state #FreeKashmir” and also supported NDTV journalist Bagla as he moved to insult ISRO’s scientists. These days there’s not much differentiating Congress bootlickers and Pakistani journalists with both sharing the common agenda of breaking India. 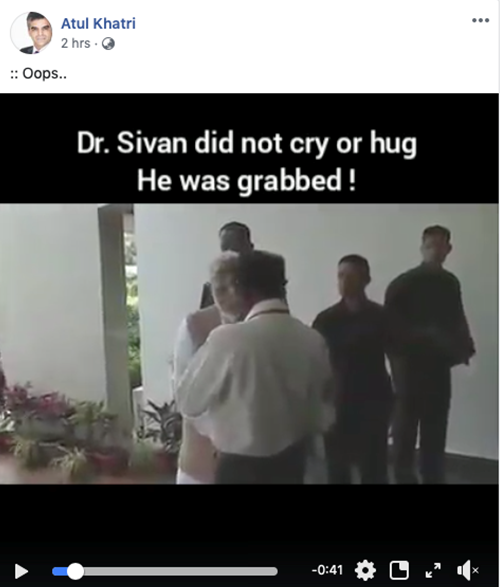 Atul Khatri a well-known propagandist masquerading as a comedian once again displayed his true colours by sharing a cropped video and alleging that PM Modi grabbed Dr Sivan. However, from another camera angle, one can see Dr Sivan was actually in tears when PM Modi moved to console him. Perhaps, this is what happens when you run out of content and have to make a living out of criticising every single step of Prime Minister Modi.

The fact that some people are questioning such a beautiful gesture by the Prime Minister shows the thinking levels of such crop of deplorable people who can go to any extent to disregard PM Modi. There is a reason why such people are in Opposition and will continue to stay there till they don’t develop their thinking. It’s a shame that even Chandrayaan-2 couldn’t bring the entire nation together and some small minds resorted to politicising it.

First Kashmir, Now Afghanistan – Imran Khan will go down in history as the most incompetent Pakistani PM ever