Newswire
Versatile Kannada writer-critic G.S. Amur passes away 6 hours ago
Kohli’s Bangalore beat Mumbai in Super Over thriller 6 hours ago
K’taka CM plays down Tejasvi Surya’s ‘Bluru a terror hub’ remark 6 hours ago
‘AIADMK to fight 2021 Assembly polls with present set up’ 6 hours ago
Paddy worth Rs 10.53 cr purchased only in 2 days in Punjab, Haryana (Ld) 6 hours ago
Kerala CRZ violations: SC seeks to know if orders complied with 6 hours ago
Next
Prev

In the Global Innovation Index, which ranks countries on their ability to innovate, India has moved up by 5 ranks. India was ranked 57th last year and reached to 52nd rank in Global Innovation Index, 2019. Cornell University, INSEAD, and the World Intellectual Property Organization jointly developed the Innovation Index to make nations aware of the importance of innovation. It surveys 143 countries around the world and used 81 measures to gauge innovation capability of an economy. India under Modi government has jumped 29 places in the last five years from 81st in 2014 to 52nd in 2019. 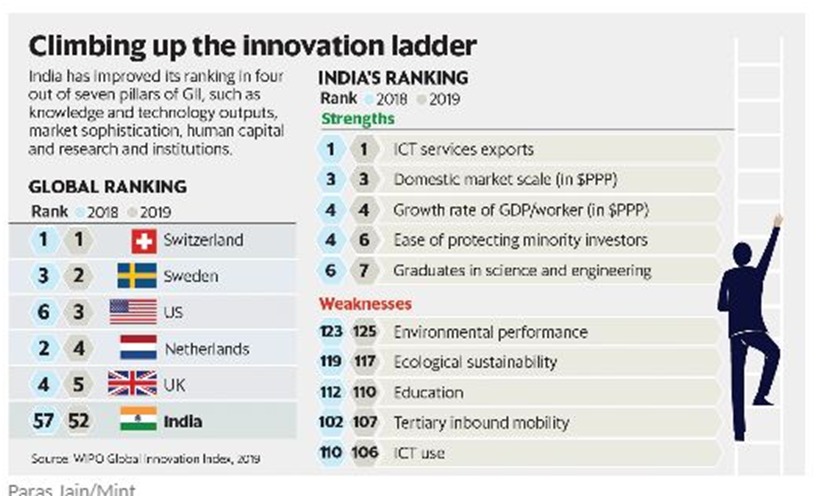 Small European countries like Switzerland, Sweden, Netherlands, and Finland were among top performers while United States, United Kingdom, and Germany were the large countries which made it to the top 10 in the Global Innovation Index. The Jewish nation of Israel was ranked on the 10th spot. China also improved its ranking by 3 places from 20th place last year to 17th place.

India has consistently improved its ranking since Modi government came to power. The country was ranked at 81st position in 2015 while the country got ranked at 57th spot in 2019. It rose by 15 ranks in 2016 to 66 and 6 ranks in 2017 to 66 and 3 ranks in 2018 to 57. “The performance improvement of India is particularly noteworthy,” reads the Global Innovation Index report. The country has been ranked as most innovative country in south and central Asian region, a distinction the country has maintained since 2011. The neighboring countries like Bangladesh, Pakistan, and Sri Lanka rank way behind India. 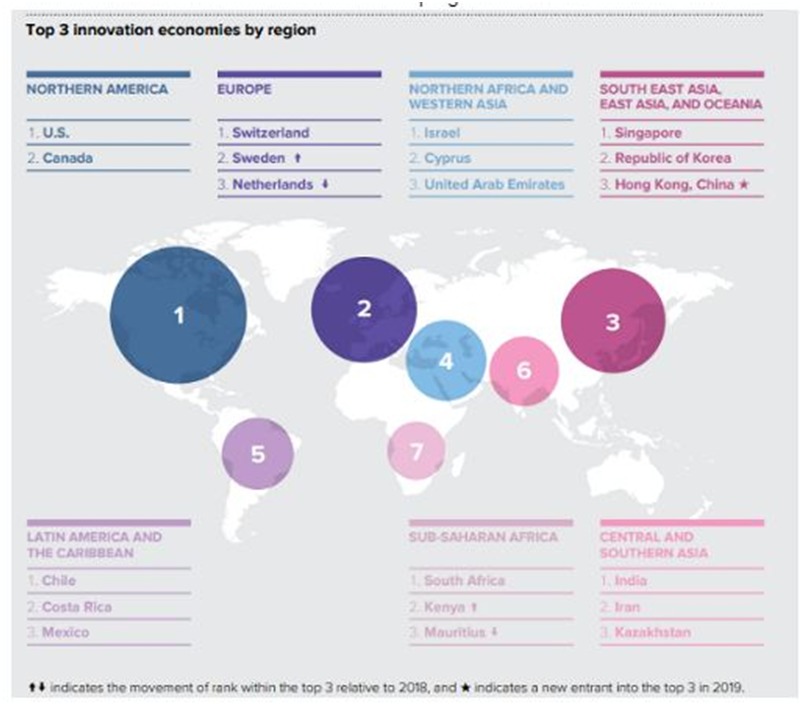 The Global Innovation Index report includes 17 chapters on various sectors and measures of the innovation with a special section on cluster rankings which ranks innovation clusters like New Delhi, Mumbai and Bengaluru in India. “India is consistently among the top in the world in innovation drivers such as ICT services exports, graduates in science and engineering, the quality of universities, gross capital formation — a measure of economy-wide investments — and creative goods exports,” said the Global Innovation Index report.

“Invention comes naturally to India,” said Industry and Commerce minister Piyush Goyal who shared the report. “Aryabhatta invented the zero, which probably is the mother of all inventions involving science and mathematics and astronomy. We are happy that India has made significant progress to the 52nd rank in the Global Innovation Index 2019. We are happy that our culture of innovation is coming to the centre stage,” added Goyal.

India fared well in four parameters out of the seven of the Global Innovation Index. In market sophistication, the country jumped three places to the 33rd spot. In knowledge and technology outputs, India jumped 11 places to the 32nd rank and in institutions, it improved by three spots to the 77th.

The country was ranked on the top in Information and Communication Technology (ICT) exports, third in domestic market size, and fourth in per worker GDP (PPP) growth rate. Given the kind protection government gives to minority investors, India was ranked fourth in ease of protecting minority investors, and sixth in gradates in science and engineering. “India ranks 2nd among the middle-income economies, with top positions in quality of universities and in quality of scientific publications,” said the Global Innovation Index report.

Since Modi government came to power, the country has made improvements in Business Environment Index, Technology Index and Corruptions Perception Index ranking, and now the Global Innovation Index. The business environment in the country has improved significantly and corruption has gone down, programs like JAM and Digital India have ensured the participation of common people in new economy. The reforms implemented in last five years are set to push the nation towards $5 trillion economy by 2024.

Mulayam Singh Yadav bewilders his own party and Opposition, votes with BJP for UAPA Bill

‘Back off, Taiwan is not China,’ EU stands up for Taiwan and leaves China red-faced