Piyush Goyal, Minister of Railways and Commerce & Industry has been a longstanding advocate of privatization. He brought many market oriented reforms in Indian Railways, the largest public sector undertaking in the country. Now, in another step to introduce market friendly policies to Indian Railways, Modi Government is set to allow private players to operate passenger trains on low congestion and tourist routes. The bids for the same will be invited in next 100 days.

In the pilot run, Railways will offer two trains to IRCTC, the tourism and ticketing arms. The trains will run on Golden Quadrilateral routes (which connect four major metropolises of the country) and between other major cities. The rakes will be transferred to IRCTC and the company will pay annual lease charges to IRFC. 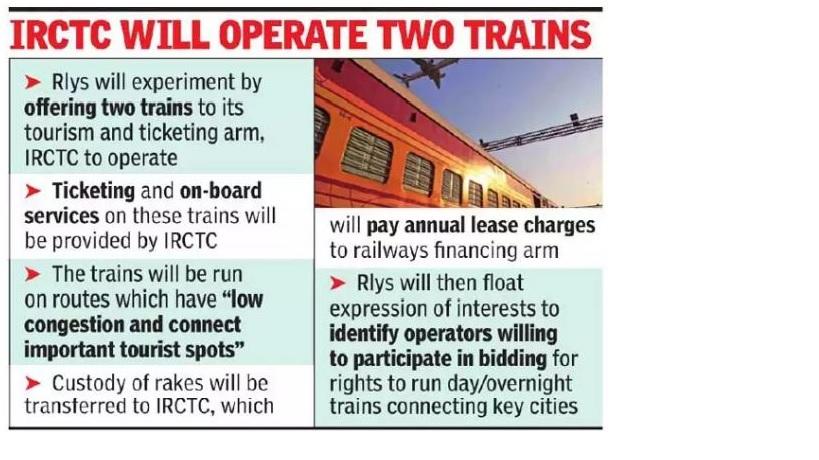 The mammoth PSU is also planning massive decentralization where every function would be categorized under a separate entity and would work towards making profits and report to a chairman-cum-managing director. The Konkan Railway Corporation already operates ‘very efficiently’ as a separate organization with the state government being the holding entity. The two previous committees- Rakesh Mohan committee and Bibek Debroy committee had both advised to create separate organizational units to attract large investments in the public sector behemoth.

The separation of freight and passenger operations would lead to greater financial efficiency. The freight operations of the railways are already efficient and are profit making operation but the passenger operation is the business where losses are incurred every year. The government plans to separate passenger operations and provide to travellers the option to voluntarily give up subsidy offered on low class travels. Under the Ujjwala Yojana, the Modi government ran the campaign, Give Up LPG Subsidy, and it was massive success with more than a crore people voluntarily opting out of the subsidy.

Indian Railways plans to replicate the success of Give Up LPG subsidy to make its passenger operations more efficient. Piyush Goyal is exploring all options to make the railways profitable.

Piyush Goyal has had a long tenure as a corporate executive and so he was opposed to the lackadaisical and infamous ‘bureaucratic attitude’ of the railway employees. Therefore the ‘perform or perish‘ mantra was adopted for railway employees. The ministry also introduced productivity linked bonus (PLB) for non-gazetted employees to send the clear message that performance and performance alone will determine the extent of promotions and bonuses. This introduction of ‘corporate work ethics’ has made the railways significantly efficient and one must thank Union Minister Piyush Goyal for the change.

Since the initial days of independence, India was a ‘confused economy’. The government kept private players out and preferred hegemony over the ‘big industries’. However, small industries were kept open to the private sector. After 1991, the country finally undertook economic liberalization and opened the big industries to the private sector. But capitalism in India was based on favoritism and government was more ‘pro businesses than being pro-market’. Finally, with these elaborate steps to transform the Indian Railways, Modi government is one step closer towards making ‘New India’ a rule-based capitalist economy.

How the humble desi Ola defeated the global giant Uber