by Animesh Pandey
in Opinions, Trending
0

The results for 2019 Lok Sabha elections have been declared and BJP has returned to power with a thumping majority. Winning a historic 303 seats on its own and 353 seats along with their allies in the NDA alliance, BJP has once again staked claim to form the government.

On one hand, the entire nation is jubilant over the return of PM Modi, and on the other hand, the left-liberal gang is devastated like nothing else. They’re more aghast at the fact that the one woman, who was allegedly tortured mercilessly in the name of ‘Hindu Terror’, the same Sadhvi Pragya Singh Thakur has demolished their web of lies to make her way to the Lok Sabha with a thumping majority. The victory of Gautam Gambhir over the scheming AAP candidate Atishi Marlena did the rest.

Annoyed at these victories, the left-liberal brigade has now resorted to shaming the Hindu community for giving a decisive mandate in favor of PM Modi. When Shehla Rashid Shora played the religion card on the initial leads giving BJP a head start, the left liberals, dumbstruck by the magnitude of the victory found their long lost voice. In most of the tweets, the left liberals haven’t only shamed the Hindu community, but also tried to justify the absurd hoax of ‘Hindu Terror’.

Leading the pack was controversial journalist Nikhil Wagle, who posted the following tweet:- 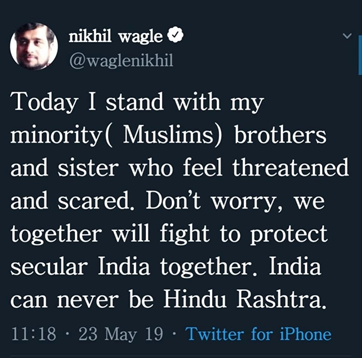 Not only has he mocked the mandate, but also he openly promoted hatred by declaring his support for Muslims against the concept of Hindu Rashtra. He has mentioned that until his last breath he will fight for the secularism in India.

Supporting his stance, academician Nandini Sundar, without naming Sadhvi Pragya, likened her victory to the victory of hatred and Nathuram Godse’s ideals in her tweet – 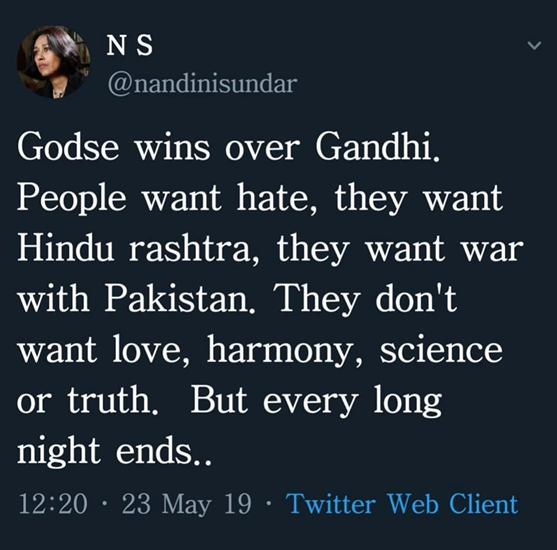 Now at such a juncture, how could a newly converted ‘liberal’ Siddharth Narayan stay behind? He is probably more devastated on learning that Atishi Marlena has lost and Sadhvi Pragya Thakur has won from the respective constituencies, which is well reflected in his tweet. For Prakash Raj, the lesser said the better – 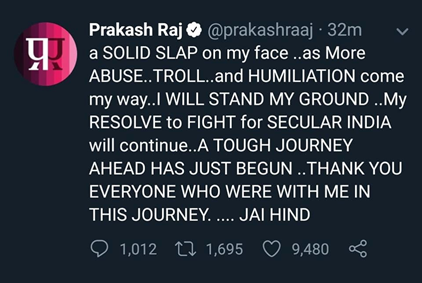 While Sanjay Jha too had his words of wisdom to add, Rupa Subramanya tried to blame the Hindus for choosing hatred over economic development, which is completely absurd, given how most of the Indians have voted Modi government for their equal care towards the economic development and national security – 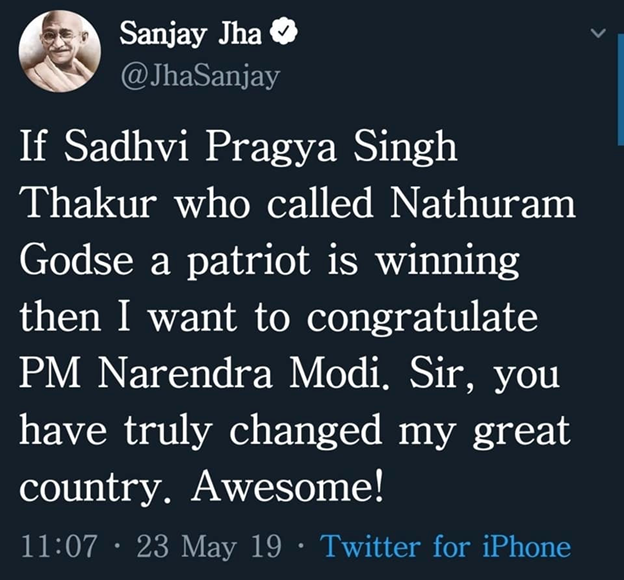 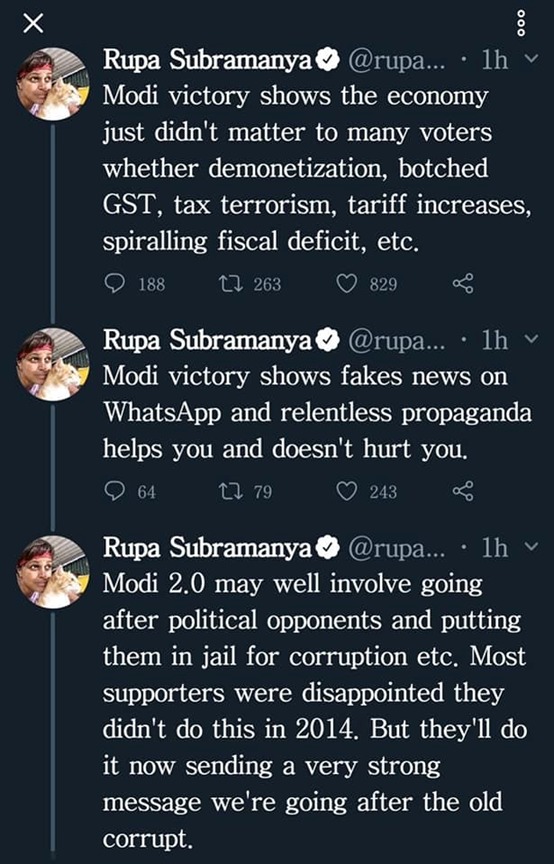 Had the left-liberals stopped at this, it was still tolerable. However, some left-liberals stooped so low that they even abused India for the decisive mandate. Following tweets are enough to show how low these people can fall in their blind hatred for PM Modi, including so-called academicians like Ashok Swain. 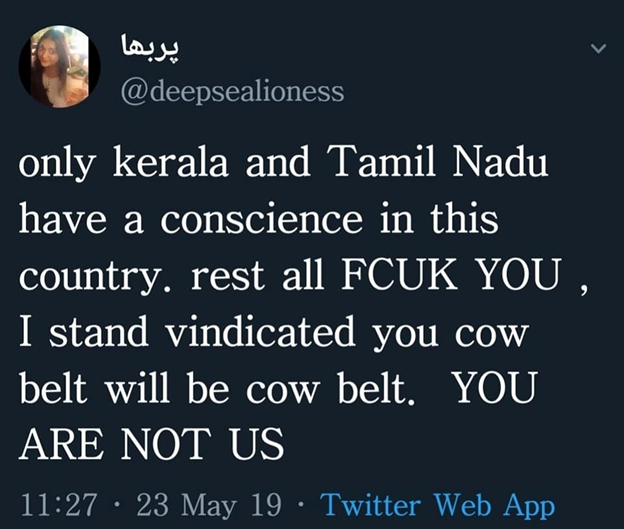 However, matters came to a head, when so-called actress Swara Bhaskar posted her a tweet, mocking the mandate and mentioning that for the first time, a terror accused is entering the parliament.

If that is the way, then what was the election of dacoit Phoolan Devi and match fixer Mohammad Azharuddin like? Did that propel India towards intellectual and economic progress? Was it a huge reform? Was it not shameful when Farooq Abdullah, indirectly responsible for the exodus of Kashmiri Pandits from the Valley, was elected to the Parliament?

The current results of the Lok Sabha elections have destroyed the fragile ego of these left-liberals to smithereens. The way they harassed and shamed the Hindu community in the name of secularism for decades, it is heartening to see that the Hindu community have struck back in the most savage manner. In such a scenario, it is natural to see the left-liberals having a meltdown, but what to do, Hua to Hua!