As the US administration imposed sanctions over Venezuela, the oil imports to India from the South American nation have increased dramatically. India was the top importer of Venezuelan oil in the first half of February with imports of 620,000 barrels per day. The oil imports from Venezuela increased by 66 percent due to demand from refiners like Reliance Industries Limited and Nayara Energy Limited.

The United States has imposed a de facto ban on the import of Venezuelan oil in the war against the socialist President Nicolás Maduro whose policies destroyed the economy of the country.  The US is the largest importer of crude oil from Venezuela and with the sanctions, only a few markets are left for the Latin American country.  India, China and the United States are the three largest importers of Venezuelan oil, other importers like Japan and South Korea have largely stopped imports from the Latin American nation due to the declining quality of its crude. 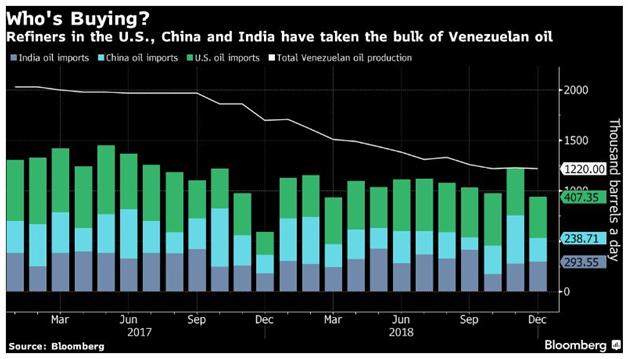 Total exports of Venezuelan oil fell by 9.2 percent and 1.12 million barrels per day in the first half of February compared to same time period in previous month. The US bound vessels did not leave Venezuelan ports during this time period. Seven oil laden ships purchased by refining companies like Valero Energy Corp and Chevron Corp are waiting at Venezuelan ports as state owned Venezuela SA asked for upfront payment due to sanctions imposed on January 28.

“The quality of Venezuelan oil has been deteriorating after years of under-investment and aging infrastructure,” said Virendra Chauhan, an analyst at industry consultant Energy Aspects Ltd. “That’s making the country’s crude more difficult for refineries to run, reducing its customer pool. This means it’ll be tough for Venezuela to sell more oil to new markets and customers outside of traditionally active buyers in China and India.” The ban on Venezuelan imports by the US will give a bonanza of cheap oil to India as the Modi government enters its pre-electoral months. The country is the fourth largest supplier of crude oil to India after Iraq, Saudi Arabia and Iran. India imported 330,000 barrels a day in 2018 compared to 340,000 barrels a day by China. Although the import of Venezuelan oil by India is 13.6 percent lower compared to the previous year and China imported 20 percent less oil compared to the previous year. The share of Venezuelan oil of the total imports of China declined from 5.2 percent in 2017 to 3.7 percent in 2018.

Venezuelan oil accounts for 8 percent of the total oil imports of India. Reliance Industries Ltd. and Nayara Energy Ltd are the only refiners in the country which import Venezuelan oil as other refineries do not have the capacity to refine low quality Venezuelan oil. The Venezuelan government is desperate to sell oil in the growing Asian market as the public finance of the country is in doldrums. The socialist economic policies and heavy borrowing during the commodity boom have pushed the country into debt. The socialist President Nicolás Maduro borrowed heavily when the oil prices were high but as the prices moved southwards, the country defaulted on loans.

The country is in desperate need of petrodollars and only exporting to India and China could provide them. Therefore as the if US stops purchasing Venezuelan oil, India and China will be able to avail of cheaper oil.