by Shubham Singh
in Analysis
0

BJP President Amit Shah, immediately after getting discharged from the hospital, headed straight to West Bengal to kick off party’s Lok Sabha campaign in the state on Tuesday. The BJP chief attacked the ruling TMC government of the state on many issues; however, the one thing which offended the TMC government most is the mention of ‘Syndicate Tax’. Amit Shah promised to provide respite to the people from the TMC’s ‘Syndicate Raj’.

Amit Shah had said, “Remove the TMC government from Bengal and we will stop cow smuggling and infiltration in Bengal. If lotus blooms in Bengal, then you won’t have to pay syndicate tax to TMC leaders.” This statement enraged TMC leaders so much that they threatened to file a criminal defamation case against the BJP chief. The TMC spokesperson Derek O’Brien, in a statement posted on Twitter said, “Mr Amit Shah, Bengal is not UP where you are spreading hate and disharmony. There is peace and harmony here. And, if you do not withdraw your wild allegations on “syndicate tax”, we shall charge you with criminal defamation.”

“Mr Amit Shah, Bengal is not UP where you are spreading hate and disharmony. There is peace and harmony here. And, if you do not withdraw your wild allegations on “syndicate tax”, we shall charge you with criminal defamation” : Derek

The TMC is behaving as if Amit Shah’s allegations are baseless; however the ground reality suggests otherwise, the BJP chief’s allegations against Mamata government are not without any merit. Under Mamata government, ‘Syndicate Raj’ in West Bengal has flourished. ‘Syndicate Raj’ is basically an extortion racket. The syndicates in West Bengal have spread their clout from real estate to Durga Puja. These syndicate groups have complete monopoly over sale and purchase of land, construction and building material. The materials are of low quality but sold at higher prices. Builders are even forced to hire workers from the syndicates only. The result of all this is that buildings and other infrastructure projects collapse like a house of cards. Some gets collapsed during construction and others sooner than expected. If anyone dares to go against these groups and takes legal route then the syndicates try each and every available trick in their book to make sure that the person surrenders to their demand.

An India Today investigation into the ‘Syndicate Raj’ in Mamata’s Bengal shows the extent to which this practice of ‘Syndicate Tax’ is prevalent in the state. The investigation revealed the shocking involvement of the party and government officials with notorious syndicates.

An India Today TV undercover reporter posed as a businessman and approached to the husband of Bidhannagar TMC councillor Swati Banerjee regarding opening a ‘restaurant’ and asks why doesn’t the police intervene? The TMC councillor’s husband, Soumen Banerjee, said, “If you protest, it will lead to a bigger problem and vandalism. They are very dangerous people. Their boss is a very big leader of West Bengal. He might become an MLA. He will have everything vandalised. Lockdown or shell out Rs 10 lakh.” He was caught saying all this right on camera. He revealed how the entire system operates, paying ‘protection money’ is a must thing, and all sorts of pressure tactics are employed in order to make sure the person succumbs to their demands. 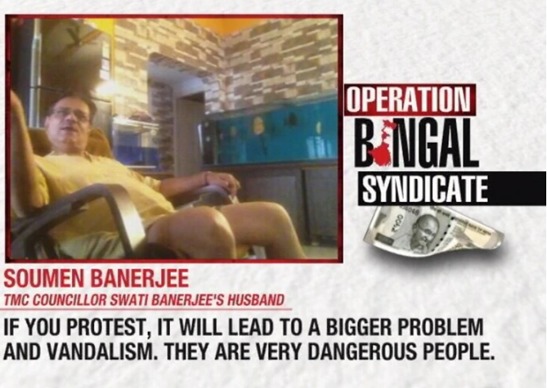 Along with Soumen Banerjee, a syndicate operative, Rana Basu, was also caught on camera demanding more than Rs. 4 lakhs from the India Today TV reporter. Banerjee said, “I told you that you have to pay up only once. He (Rana) will conduct Durga Puja in some other ward, not mine. Just see to it. That’s it. Give him Rs 25,000 and close this discussion.”

Rana Basu then turned to India Today TV reporter for Banerjee’s share, “Tell him [the reporter] how much you want for yourself?” Banerjee replied, “You give Rs. 25,000 to him and pay me four (Rs4 lakh).” When the India Today TV reporter demanded to meet with TMC Councillor- Swati Banerjee- her husband Soumen Banerjee said, “What will she do? You spoke to me. That’s equally good.”

Banerjee further hinted as to what will happen if one fails to pay extortion amount. He said, “They will lock everything down and demand Rs5-Rs10 lakh. The work won’t resume (if you don’t pay up).”

So, one has to pay more than Rs. 4 lakhs just to start a restaurant. It shows the extent of influence enjoyed by the syndicates. The syndicates are operating fearlessly and prospering in West Bengal. The syndicates on camera narrated an incident where they had threatened a man who started construction in his area without paying extortion money. He said, “I have come to know that roofing is being done at a construction site in my area. When I told him clearly that my club hasn’t got any donation and I will stop the construction, he started pleading and said that would consider it (the demand). Everything will be visible when I fix him up.”

A TMC worker Sushanto Das boasted, “The party is all ours. All leaders are with us.” He is a close associate of North Dum Dum’s TMC councillor Bidhan Biswas. Das boasted, “This is our area. We manage everything-from the chairman, councillors to building plans. You don’t have to worry about anything.” He also said, “If someone buys land via others, we will cause ruckus.”

The News18 has quoted the CPI (M) Lok Sabha MP Mohammed Salim saying, “Trinamool Congress leaders are patronising goons of the syndicate. Forget about other leaders, the Chief Minister’s own brothers are involved in the syndicate racket. These people are asking for protection money and the real estate developers are in a state of shock.”

In 2016, a sting operation surfaced about Bidhannagar mayor Sabyasachi Dutta. The sting operation exposed Dutta who is from TMC saying that it takes nearly Rs 50–60 lakhs to contest the assembly elections and that most of the money comes from syndicates. He is now an MLA from the TMC. According to a Hindustan Times report, Dutta also revealed how his party supports syndicates so that the funds could be siphoned back the party before the elections.

When the sting came out, Robin Deb from CPI(M) had said, “There are four pillars on which Trinamool Congress is standing, bribes, extortion, syndicates and chit funds. Using these they came in power, using the same they want to stay in power. So many murders took place in Rajarhat-Newtown surrounding syndicates. Sabyasachi’s statement only proves it.”

Even the TMC leaders are not safe from syndicate raj. The India Today TV has quoted Bengal Bharatiya Janata Party V-P Chandra Kumar Bose saying, “My cousin Sugata Bose, who is a TMC MP from Jadavpur constituency, was attacked. My aunt Krishna Bose, who is 90 years old, was attacked. Her family was threatened and was told that they could not repair their house unless they bought building material from the syndicate. TMC leaders are accepting [on camera] that there is syndicate raj.”

The malaise is deep and widespread, according to this firstpost report, in 2016 Justice Dipankar Dutta of the Kolkata High Court told the state government’s lawyer, “Ask your police to take strong measures against such syndicate raj.” He also added, “The situation is so alarming that members of syndicates are not even sparing the courts. Kolkata High Court has been facing similar problems while constructing court buildings at Salt Lake and Asansol. The situation will go beyond control if the state administration does not immediately intervene.”

A nexus like ‘Syndicate Raj’ which is responsible for the many ills of West Bengal must be brought to an end and if the local political parties really care about their state then they should also co-operate with the BJP chief instead of threatening him to slap with a defamation case. Last year in July PM Modi also attacked the TMC over ‘Syndicate Raj’. He had said, “The TMC uses syndicate to extort, kill opposition cadres, snatch farmer’s produce and for vote bank politics and appeasement politics. The syndicate will decide where the farmers will sell their crops and at what rate, where cements, sand and tin will be bought from and one even needs permission to get admitted to the colleges.” He also added, “Just a few more months. Bengal is waiting for an opportunity to remove the shackles. People of Bengal have to be united like Tripura to uproot the syndicate raj.”

It seems that the BJP is going to make menace of ‘Syndicate Raj’ in Bengal as one of its main weapon to attack the TMC in the upcoming Lok Sabha elections, and the TMC has always been on back foot and this explains why they get restless and irritated just with the mention of ‘Syndicate Raj’.