No Result
View All Result
Newswire
Indian-American Democrat running for Cincinnati Mayor 23 mins ago
NIA summons to journalist, farmer leaders, others in SFJ case 29 mins ago
S.Korea to extend social-distancing rules 44 mins ago
Consumers spend $57 bn on video games in US in 2020 47 mins ago
Pak no country for Christians, reveals report 50 mins ago
First vax shot given to Bihar hospital sweeper 53 mins ago
Next
Prev

India is all set to enter in 200 billion dollar global market for coaches and wagons with the ultra-modern Train 18. Many countries like Peru, Indonesia, Singapore, Malaysia, and some Middle Eastern nations have shown interest in Train 18. The state of art train was built in Integral Coach Factory (ICF) of Indian Railways with the aim to replace the Shatabdi Express, the fastest train in the country. The debut commercial run of Train 18 will take place between Delhi and Varanasi very soon.

“Many countries have expressed interest in the train set and we are happy and proud that an indigenously made product is attracting so much interest. The rolling stock market worldwide is worth about 200 billion dollars and we want a significant share of it. Now, the aim is to successfully run the train,” said Member, Rolling Stock, Railway Board, Rajesh Agarwal. The interest of the countries is due to cheap price and state of art technology in Train 18 coaches. The train sets with facilities of Train 18 are priced around 250 crore rupees while the cost of Train 18 is just 100 crore rupees.

India will host International High-Speed Rail Association (IHRA) in February as the latest entrant into semi-high speed club and Train 18 will be presented as the mascot of manufacturing capabilities of Indian Railways. It took just 18 months for ICF, Chennai to build a modern semi high-speed train at less than half of global cost. Train 18’ is engine less, the coaches are self-propelled like metro and energy-efficient. This represents the manufacturing prowess of the country. 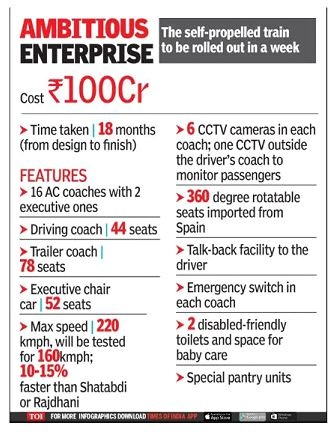 Modi government is leaving no stone unturned in the process and is trying to capitalize the opportunity through various initiatives. The manufacturing of semi high-speed train at less than half of global prices is the latest example of the success of PM Modi’s initiative. Earlier, Alstom SA, a French multinational operating in rail transport exported 22 metro train sets for Sydney metro. The six-car train sets were fully designed and manufactured in India at the company’s plant in Sri City, Andhra Pradesh. “This is a very important milestone for us because the Sydney Metro project was the first international project fully delivered from India,” said Ling Fang, SVP, Alstom South Asia.

The world has surely taken the notice of the conducive investment environment in India. World’s biggest tech giants and entrepreneurs have already made their expansion plans in India. Investors around the world have shown immense confidence in India which will be helpful in meeting the needs of the Indian economy and hence, employment generation in India will see the boost. The onus of success largely goes to initiatives like the Make in India, Digital India and Skill India by the NDA government.