by Shantanu Shekhar
in Analysis
0

According to a report by India Today, if the margins of defeats of BJP in 7 constituencies in the Madhya Pradesh assembly election is combined, it stands at just 4,337 votes. If Shivraj government of Madhya Pradesh had received an extra of 4,337 votes, it would have formed the government for the fourth consecutive time in the state.

Reports suggest that in the Madhya Pradesh assembly election, there were around 10 seats where the margin of votes between the winning candidate and that of the runner-up was less than 1000 votes. Out of those 10 seats, Congress was able to grab 7 seats which played a major role in the saffron party’s defeat. As a matter of fact, the BJP trailed by just 5 seats to the Congress in Madhya Pradesh elections. 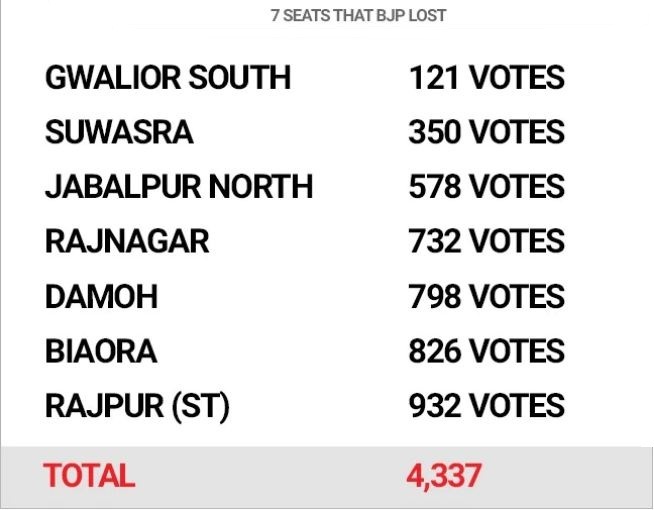 If we observe the data more closely, out of total 3.77 crore votes that were polled in the elections, the BJP was able to bag 41%, while 40.9% went in the favour of the Congress party. In fact, BJP got 47,824 more votes than the Congress party still the former was not able to get the mandate. Besides, 10 seats there were another 18 seats where victory margin between these parties remained less than 2000 votes. Similarly, 30 seats were decided by a margin less than 3,000 and 45 seats were won or lost with a margin less than 5000 votes.

In effect, some 8-10 lakh votes have changed the entire narrative in the run up to 2019!

Although the BJP missed the mandate in all of the 5 states as per the vote share, it seems that the party cadre has strengthened over the time. If the narrow vote margins and the overall vote share of the BJP in Madhya Pradesh are considered, they become indicative of the fact that despite 13 years of anti-incumbency, Shivraj Singh Chouhan had almost been able to retain his stature in Madhya Pradesh. 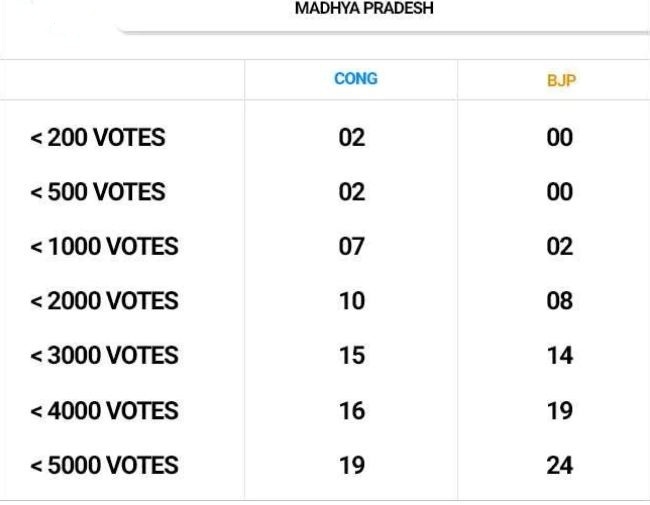 Also, the role NOTA cannot be downplayed as it contributed hugely in BJP’s defeat in these elections. A high number of NOTA votes signifies one thing that voters may or may not like BJP but they surely do not consider Congress as an option. This is not for the first time that the NOTA has turned out to be a bane for the BJP. Before this, the BJP had lost more than six seats because of ‘none of the above’ in the Karnataka assembly polls. It is clear that if considerable NOTA voters had voted for the Bharatiya Janata Party, the poll results would have been very different.

Another reason which surfaces after BJP’s defeat is the disinterest of their voters in going out and voting for the party. It seems that BJP supporters are getting complacent about the victory of their party. The most prominent reason for the complacency is the continuous victory of the BJP since 2014 when Narendra Modi was first elected as PM. After 2014, BJP won almost all of the state assembly elections leaving few exceptions like Bihar, Delhi, and Karnataka. This lulled the BJP core voters into dormancy. These assembly elections are somewhat like the semi-final, prior to the final Lok Sabha elections of 2019. This is the right time for the saffron party supporters to buckle up and get ready to back their party by voting for it in 2019.

Only 800 farmers benefited from farm loan waivers in Karnataka