The monthly data released by the Central Statistics Organization (CSO) brought good news for the Indian economy. The industrial growth of the country touched an 11 month high of 8.1 percent while retail inflation dropped to 2.33 percent, a 17 month low. “The sharp easing in the headline CPI inflation to a lower than expected 2.3 percent in November 2018, reflects a combination of favorable factors such as the correction in retail fuel prices, discomfiting factors such as a deeper disinflation in food prices, and base effects related to the waning impact of the HRA (House Rent Allowance) revision for central government employees,” said Aditi Nayar, principal economist at rating agency ICRA. 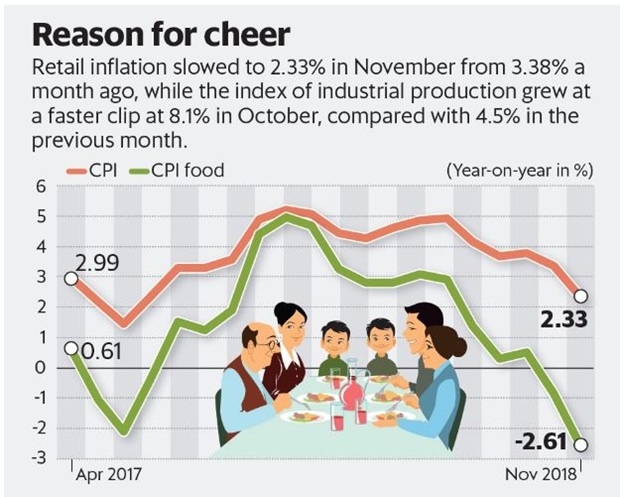 The decline in inflation was especially visible in the Consumer Food Price Index (CFPI) which was already negative at -0.86 percent in October and further declined to -2.61 percent in November. Food and beverages segment deflated by 1.69 percent in November due to lower prices of vegetable and pulses. The ‘fuel and light’ category declined to 7.39 percent in November from 8.55 percent in October. RBI projected an inflation rate between 2.7-3.2 percent between October and March. The retail inflation is very low in comparison to what RBI has predicted. As there is administrative change at RBI’s affairs and given the ‘liberal’ stance of the newly appointed governor on policy rates, a rate-cut could be expected in upcoming months. The experts expect retail inflation to remain low in the upcoming months and therefore rate cut from RBI is much awaited. B Prasanna, head, Global Markets Group, ICICI Bank, expects retail inflation to remain below 4% until the first quarter of FY20. “We also expect a change in monetary policy stance to ‘neutral’ from ‘calibrated tightening’ in the February policy and expectations of a rate cut will now start building,” he said. 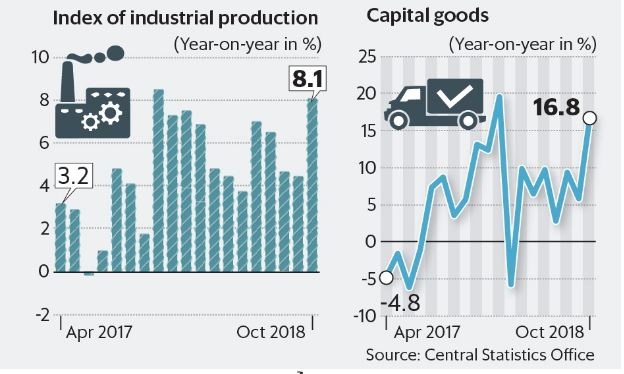 The efforts of the Modi government seem to have contributed to the industrial growth of the country. If the economy gets a backing from RBI with a low lending rate, the growth could be accelerated. India has one of the highest lending rates in the world and the central bank of the country has been conservative on policy rates under the tenure of governors like Raghuram Rajan and Urjit Patel. The initiatives of the Modi government for the MSME sector will bear fruits only if they get the backing by easy loans and soft stance insolvency. Therefore, it is important for RBI to collaborate and cooperate with the central government to support the country’s growth and development.

Complicity in anti-Sikh riots, name in Radia tapes and other allegations against the new CM of MP