No Result
View All Result
Newswire
‘I’m pure Cobra, can kill in one bite’: Mithun 29 mins ago
‘More health factors should be considered for healthy heart’ 53 mins ago
Prez stresses on women’s safety, independence on Women’s Day 56 mins ago
Will stand with farmers till my last breath: Priyanka 59 mins ago
Covid pandemic in endgame in India: Harsh Vardhan 59 mins ago
J&K reports 112 fresh Covid cases, tally at 127,044 1 hour ago
Next
Prev

After the implementation of Goods and Services Tax, an average consumer saves almost 320 rupees per month on the purchase of daily use consumer goods like edible oil, cosmetics, and cereals. According to research based on consumer expenditure data, a household would be saving Rs 320 every month on their monthly spend of Rs 8,400 on 10 goods- cereals, edible oil, sugar, chocolates, namkeen and sweets, cosmetics and toiletries, washing powder, tiles, furniture and coir products and other household products, quoted PTI. As per the expenditure analysis, since the implementation of GST, the tax rates on 83 commonly used products have come down. These products include washing powder, footwear, food and beverages, soap, hair oil etcetera.

Under the new indirect tax reform which was implemented on July 2017, 17, the central and state taxes were amalgamated to be brought under one umbrella. The problem of tax on tax (cascade taxation) was also solved with the implementation of the Goods and Services Tax. Earlier, tax in the monthly spending of 8,400 rupees on daily used items was 830 rupees while in the post-GST era, it has been reduced to 510 rupees thus saving almost 320 rupees for the consumer. 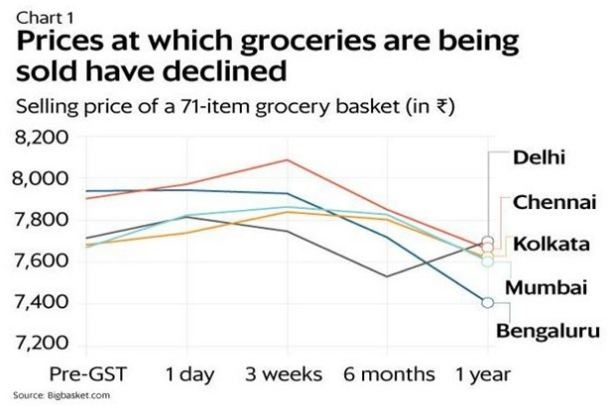 The cereals like wheat and rice were taxed at 2.5-2.75 percent before the implementation of Goods and Services Tax. But now the tax on wheat and rice is zero. Namkeens and sweets are taxed at 5 percent in a post-GST era against 12 percent and 7 percent of the pre-GST period. The taxes on washing powder and tiles have come down to 18 percent from 28 percent of the post-GST period. The tax applicable on furniture now is in the range of 5 percent to 18 percent which earlier used to be taxed from 12 percent to 28 percent. 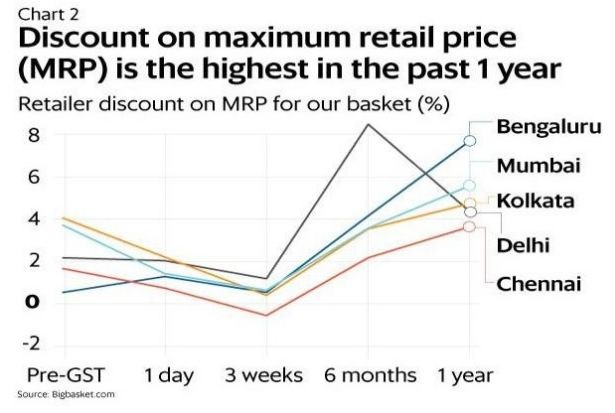 The implementation of GST came as a major benefit for consumers in the lower strata of society. Under the new indirect tax regime, the daily use products were put in the low tax category. Modi government introduced multiple slabs in GST against Congress’ single rate to take care of poor consumers. Under the single rate GST, slippers and BMW car would have been taxed at the same rate. The Congress’ GST was elitist and anti-poor. This type of GST has already led to inflation in several countries and hence dissatisfaction among consumers. Malaysia scrapped GST altogether in few months after implementation due to inflation and public outrage against it. If the Modi government would not have implemented GST with multiple slabs, the lower taxation of basic need products could have never been a possibility.

The GST was expected to be disruptive and harmful to the Indian economy in a short run of one or two years but it proved to be less disruptive than expected. Goods and Services Tax has proved to be very effective in widening the tax base in India. It has also helped to increase the indirect as well as direct tax revenues of the country. The number of direct taxpayers has increased from 6 million to 10.6 million in the fiscal year 2017-18 which is a positive spillover effect of the GST. According to experts, there will be some positive and some negative spillover effects of GST in the coming years. Moreover, GST seems as influential as the liberalization of the economy in 1991.

‘Who will answer for 26 Jan violence?’ Girl stands up and puts Tikait in a fix as he tries to make her shut up