Indian media is well known for sensationalising issues. To attract more eyeballs, media organisations exaggerate everything and make sensational headlines. The print medium is relatively better but few websites and almost all the television channels are more of Ekta Kapoor serials than platforms for sensible coverage and informative reporting. The left-liberal media establishment collaborates with the opposition, mainly Congress which has nurtured and nourished it since the days of state monopoly over media, and spreads ruckus. The state monopoly over media ended in last the few decades but the subservience of left-liberal media to Congress remains the same. The people in the media still pursue fear and rumor-mongering on the direction of their political masters.

In last months, a slide in the value of rupee was noticed in comparison to US dollar with reasons being primarily global. The reasons include the ongoing trade war and rise in crude oil prices. The mainstream media reported this as if a major headwind had hit the Indian economy and worst thing about the reporting was that the reason behind ‘slide in rupee’ did not find prominence. The slide of rupee was reported as if the policies of Modi government were utterly responsible for this. However, the rise in oil prices was the main reason behind the decline in the value of rupee with other major Asian currencies meeting the same fate. In the light of rising oil prices, the foreign investors from capital rich western economies pulled out money from Asian countries in fear of dwindling public finances and invested in American markets which pushed the dollar northwards. 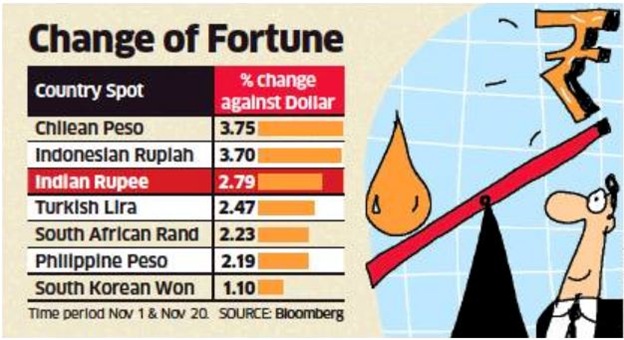 The rupee has simultaneously gained 2.79 percent in the last 20 days of this month along with the decline in oil prices. In the last 40 days, global crude oil prices have significantly moved southward and declined by almost 25 percent and resulted in the consolidation of rupee in comparison to the US dollar. The rise in rupee is the third highest gain among currencies of other emerging markets. Other currencies to make maximum gains include Chilean Peso at top with 3.75 percent in this month while Indonesian Rupiah gained 3.70 percent in the same period.  “With moderation in oil prices and the consequent resumption in FII inflows, the fear of sustained deterioration in India’s CAD and balance of payment has been put to rest. The rupee has recovered substantial ground and is likely to appreciate more if oil prices sustain at the current levels,” said B Prasanna head of markets at ICICI Bank.

The rise in the value of rupee was also helped by many other factors including Open Market Operations (OMO) under which RBI pushes money into the system to stabilise the currency. On Monday, RBI said that it would pump 8,000 crore into the system through government security purchase. Modi government signed a USD 75 billion ‘currency swap agreement’ with Japan to address the rise in Current Account Deficit (CAD) and fall in Rupee’s value. However, these steps could only hold the value of rupee for a short-term and for long-term benefit, the fall in crude oil price becomes crucial. If the global crude oil prices go further down, it would not only strengthen the rupee but petroleum prices will also remain under control. The value of rupee and crude oil prices are inversely proportional which means if the price of crude oil rises, the value of rupee goes down. However, the short-sighted media houses blame the government for weakening rupee as well as the rise in petrol and diesel prices. The fact remains that government has no control over both of them as they are determined by global factors.

The disdain of Lutyens’ media towards Modi government is very much visible from the overall reporting on the rupee issue. The short-sighted and ideologically polarised anchors and journalists in English media reported the fall of rupee in a way as if the macroeconomic conditions of the country had become worse and the country was on the verge of becoming a defaulter in the international payments system. Indian media exaggerates every issue and the TV shows lack mature content. The Prime Time shows on TV give a sense that the world will fall apart on just the other day. The media needs to behave more responsibly and should have the national interest in the top of their priority list.