No Result
View All Result
Newswire
Russia warns of US cyber attack after SolarWinds hack 45 mins ago
Russia welcomes US proposal on extension of arms control treaty 45 mins ago
India to plan against England in week-long quarantine period 1 hour ago
Miqdaad Dohadwala, on being a stand-up comedian in Dubai 1 hour ago
Baghdad security breach won’t be repeated: Iraqi PM 1 hour ago
Bolsonaro says ‘Dhanyavaad’ to Modi for vaccine exports 1 hour ago
Next
Prev

Modi government’s successful push to eradicate the scourge of Naxalism

by Mani Bhushan
in Analysis
0

Demonetization, announced on 8th November 2016 had different objectives- one being combating Naxalism. Through the report on demonetization and its impact on combating naxalism, we have tried to do the empirical research by collecting qualitative and quantitative data from 33 naxal affected villages located in Sukma, Bijapur, Narayanpur and Rajnandgaon. Demonetization has multi sectoral impact and one such impact is on Naxalism. The left liberal reports are so biased that while I was doing the literature review for the project, I wasn’t able to find a single research report based on facts and empirical data. This is the reason that even at a personal risk, I decided to visit the affected villages, collect empirical data and then prepare the report. Being the heartland of Naxalism, it was indeed very difficult to go in the interior villages and talk to the common tribals, especially when they have been brainwashed by the naxals. But taking the challenge, I travelled more than 2300 km interviewing all the stakeholders including Naxal Leaders.

Naxal movement has been one of the longest interior arm conflicts faced by any country. Since 1996 till now more than 15000 people have died because of the violence caused by Naxalites. Once a very serious challenge, the effect of Naxalism today has reduced further in the last few years because of the serious efforts by the government and the forces. Earlier the casualty among the security forces used to be higher but now it has turned reverse and causalities among Naxalites are higher. With a clear vision and commitment, the government initiated very strong reforms to control the menace of Naxalism. From launching a special assistance scheme for all the Naxal hit states and the bold measure of demonetization, the central government under the leadership of Prime Minister Shri Narendra Modi and Home Minister Shri Rajnath Singh has effectively put all the resources to end the armed rebellion by the Naxalites. The government has also been very effective in unmasking the true nature of the rights activists who actually supports the armed struggle by creating a positive atmosphere for them in the university campuses and other urban spaces. The then PM Dr. Manmohan Singh, recognizing the danger of Naxalism, termed it as country’s biggest internal security threat. But unlike the current scenario, not much was done to end the menace. Tough talks were generally not followed by the tough actions which can easily be shown by the available data. To compare the actions and outcomes of UPA run Government and the NDA run Government, the research team compared the data of the corresponding years 2013 with that of year 2017 on the following indicators. Year 2013 was the last full year of governance of the UPA rule and year 2017 is the last full year of governance of NDA rule for which all the data is available.

1. Number of Naxal Incidents: In comparison to UPA rule, the number of Naxal incidents has decreased by 20% in the Government run by NDA. 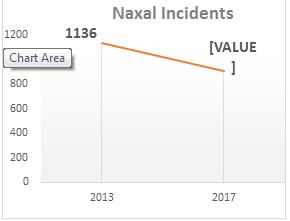 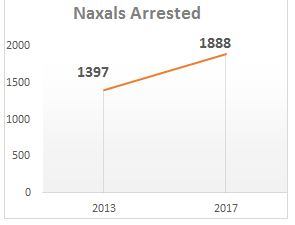 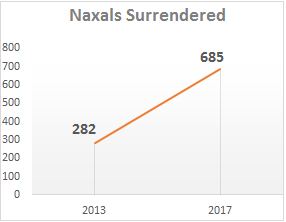 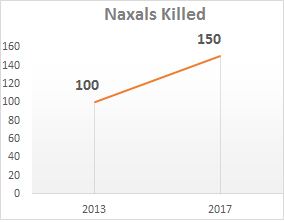 5. Number of Security Personnel Martyred: In comparison to the UPA rule, the number of security forces martyred has decreased by 35% in the NDA rule. 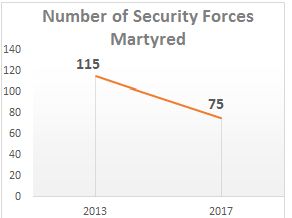 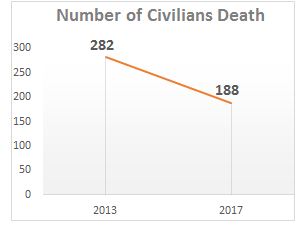 This result can be attributed to the numerous reforms taken by the present government, including demonetization, which has been very instrumental in pushing the Naxal movement in its last leg today. The central government recently created ‘Bastariya’ battalion of CRPF which for the first-time recruited more than 500 tribal youths from Chhattisgarh. The battalion is named ‘Bastariya’ as its members are from the Bastar region in southern Chhattisgarh, bordering Andhra Pradesh, Odisha and Telangana. The unique battalion – recruited from Sukma, Dantewada, Narayanpur and Bijapur districts of undivided Bastar – has been raised with a specific purpose to strengthen security forces’ operations in areas where they have witnessed maximum reverses for a few years owing to a lack of concrete intelligence and familiarization with locals and the topography. The hardcore, localized battalion of the young combatants was immediately deployed for anti-Naxal operations in some of the worst Left-Wing Extremism-hit areas such as Sukma, Dantewada and Bijapur. Unique initiatives like this have been at the center of reforms taken by the government to end the menace of Naxalism and the data shows how the government is successful in doing that. Surely there are many challenges and government should be aware of the two instances of the past in which the movement almost ended but started again in its new form.

Today the government is in a position of strength. As it is said that any offer of peace from a position of strength is always credible and has greater chance of success. The present situation offers an ideal opportunity to solve the problem permanently and save the future generations from the armed rebellion which has captured the 106 districts of India. The government, of course, must be careful that the Maoists do not use the peace period to gain time and regroup their forces.

Lal Krishna Advani: Rebel with a cause

The much delayed tribute to martyred Karsevaks