Factors which will propel BJP to victory in Rajasthan

by Asutosh Mohanty
in Analysis
0

Preparations are in full swing in poll bound Rajasthan. Rajasthan is going to be an uphill task for BJP as the voters are known to alter between Congress and BJP. Deemed to be a “practice run” for the 2019 national election for the BJP, these elections will give a clear picture of Vasundhara Raje’s social welfare schemes and the popularity graph of PM Modi.

While the opinion polls indicate that history is set to repeat itself in Rajasthan and hinted at dropping popularity of Raje among a section of supporters, let’s examine how shaky BJP’s prospects are and whether the BJP’s electoral genius would be able to make it look stable.

“We are making Rajasthan strong, aggressive, and a progressive state. Women are our new strength and they are going to unleash new energy.”  — Vasundhara Raje, Hon’ble CM of Rajasthan

You would be wondering why suddenly this statement and why Vasundhara Raje has been promoting this perception that she is here for “WOMEN EMPOWERMENT, EMPOWERMENT and EMPOWERMENT”

Statistics has proven in the past that “When women outvote men, the probability of BJP sweeping any elections increases many folds”. Lets analyze few events from the recent past for authenticating this hypothesis

There’s an interesting analysis done by Dr Praveen Patil in the article titled “WOMEN ARE IN THE DRIVER” published in 5forty3 magazine.

“This was in 2012 December. Saurashtra had seen one of the worst drought years in recent memory. Although the Modi government had handled the drought scientifically to provide some relief to the farmers, the anger was palpable. I had then, recently released my paper known as the “Drought Electoral Theory” which had formulated that almost all governments fail to get re-elected in an election following a drought year.

What was adding spice to this anti-incumbency current was the so-called “Patel anger” which was manifesting itself in the form of support to Keshubhai Patel’s GPP. It wouldn’t be an exaggeration to state that at around noon on 13th December 2012, Congress and GPP were both together out voting the BJP at the ratio of 2:1 across Saurashtra, although the race looked equal in South Gujarat.

The fate of the nation was hanging in those polling booths. If the then Gujarat CM, Narendra Modi were to be defeated, any chance of him ascending to the leadership of BJP and then leading India could at best be described as practically non-existent. By 3:30 PM, the data picture had changed completely. The BJP had been rescued by the Gujarati women. That election saw the highest ever women turnout in Gujarat’s electoral history as 70% women electorate came out to vote. Narendra Bhai not only went on to win the 2012 Gujarat elections overcoming the “Drought Electoral Theory” for the first time in India but also the national election in 2014…” Dr Praveen Patil wrote in that article.

Scenario in Rajasthan in 2013 was no less than what was in Gujarat a year back. In 2013, voter turnout of women 75.6% as compared to 74.9% of men helped the BJP in creating a history by bagging the highest number of seats ever by any political party in Rajasthan. 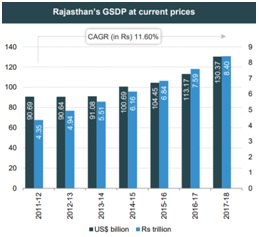 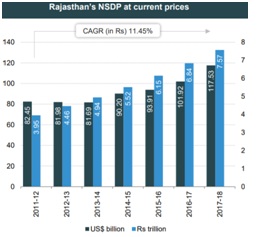 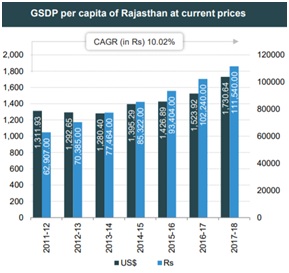 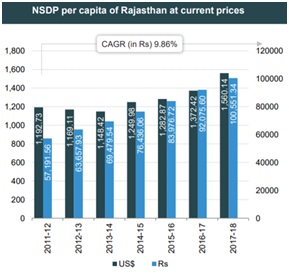 Modi still remains one of the crucial factors

The Modi factor is still very strong in Rajasthan. In 2014 national elections, as per CSDS post poll survey, 42% of BJP voters said they would not have voted for the party if Narendra Modi weren’t the PM candidate, the national average was only 27%. As per India Today – Axis Political Stock Exchange released on 7 September 2018, 57% of the respondents want to see Modi as PM versus 35 per cent for Rahul Gandhi, a lead of 22 per cent. About 46% respondents rate the performance of Modi as good while another 12 per cent as average, exhibiting strong satisfaction with his performance.

Various Central Govt. initiatives has also brought positive impact in the life’s of residents of Rajasthan. To highlight a few…

Infighting within Congress, By-Polls results and caste equations how will it impact

Infighting in the state Congress and no clarity of the CM candidate means Congress is a house divided. To mitigate the damage, Congress high command has decided to contest polls under a “collective leadership”. Ashok Gehlot had been the CM candidate of the party in last two elections. But rising image of Sachin Pilot (who is credited with party’s by-elections victories) is actually creating rift between the two factions of not only party workers but also sending wrong signals to voters.

By-Polls loss for BJP was very shocking to Vasundhara Raje. The verdict was an emotional outburst of people’s anger against BJP State Govt for encounter of gangster Anandpal Singh. Anandpal Singh belonged to Rajput and stood with Rajputs in their clash against Gujjars. Since Rajputs have been traditional vote bank of BJP, and the slight by BJP compelled them to switch allegiance. This effect has mellowed down much, so if Congress is believing that these sections of voters will again vote for them again than Congress might get a setback.

The return of MLA Kirodi Lal Meena is a big boost for the BJP ahead of the assembly elections. Meena, a five-term MLA and two-time MP, is an influential leader and his community has a significant presence in 28 assembly seats in 11 districts of eastern Rajasthan.

Launch of new political outfit by Jat Leader Hanuman Beniwal can be blessing in disguise for BJP as Jat’s are majorly Congress supporters in the state and this new outfit will split Congress’ overall votes.

In Rajasthan, the party which is able to garner the majority support of Rajputs, Gujjar, Jat, Meena and OBCs and manage the contradictions within this social rainbow alliance will ultimately win the polls. Rajasthan is a caste conscious state and which way the caste equations swing will decide the fate of either party.

To sum up, Modi – Shah – Raje with a brilliant combination of Women Centric Empowerment messaging, Modi’s Charismatic Leadership style and crafting a winning caste-societal combination can emerge victorious by reversing the trends like Akalis did in Punjab in 2012 and Late Jayalalitha did in Tamil Nadu in 2016.

The rise and rise of Janam TV