The High Court of Andhra Pradesh has slammed the Andhra Pradesh government for giving away temple land to third parties without seeking permission from the Court. On Tuesday, the High Court directed the state government to pay at a rate of Rs 24 lakh per acre along with 24 percent interest per annum for the four-acre land they took away from Sri Amareswara Swamy temple in Amaravathi village of Guntur district 16 years ago without paying a single rupee so far. The district collector of Guntur delivered possession of the land to the Social Welfare Department for raising a girls’ hostel without adequately compensating the temple. Earlier, a single judge bench had ordered the authorities to compensate the temple management before the transfer of temple land. Andhra Pradesh Social Welfare Residential Schools Society argued against the single judge order and contended that the government has the power to allot endowment land for public purposes. However, the bench of acting Chief Justice Ramesh Ranganathan and Justice J Uma Devi dismissed the plea and upheld the single judge bench order.

Since independence, Hindu religious institutions are gradually being taken over by the Andhra Pradesh state government in order to gain access to their resources. The management boards which control temples are mostly headed by some ‘esteemed academician’ who doesn’t even believe in God or doubts the existence of one. The priests are not allowed to interfere in the management of temples, and finally getting fed up of these corrupt left-leaning board managers, some priests have started to speak out against them. In the holy name of secularism, governments control the religious rituals carried out in temples, decide who will be appointed as the chief Pujari of the temple, manage their finances and even tax the income of Hindu temples. This seems similar to the Mughal period when “jizya” (a special tax paid by Non-Muslims to Muslim rulers) was paid by Hindus. The temple boards have completely commercialized the operations of the temple with arrangements such as VIP darshan and shortening of rituals. They are running temples like a corporate house to maximize the profits for themselves and for the government, while the faith of devotees is hurt due to such blatant commercialization. Since BJP came to power there has been greater emphasis on Hindu Sensibilities in politics.

The bench of Chief Justice Ramesh Ranganathan and Justice J Uma Devi had said that any alienation of endowment (a donation of money or property to a non-profit organization, which uses the resulting investment income for a specific purpose) land should be done only if it furthers the cause of the endowment, as per the definition of endowment. It said, “You have wrongly learned that all endowment lands, be it temple land or waqf land, are government lands. You have to unlearn it first. Remember the order of this high court issued a decade ago making it compulsory for the state to obtain the nod of the high court to alienate endowment lands. Endowments commissioner has to accord permission for such alienation and it should be done only by way of a public auction and it should be done only if it helps the endowment.” If the state wants to acquire the endowment land for public purpose, as per 2013 land acquisition Act, it can go with that but the government will have to compensate the temple, since temple land is not public property as per the law. Swarajya magazine prepared the following chart on how government discriminates against Hindu religious institutions. 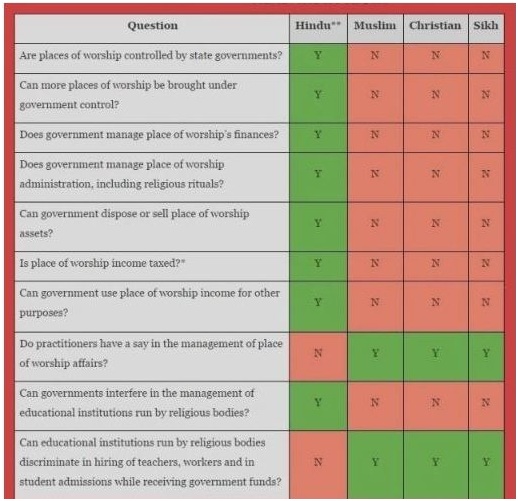 There is anger amongst the priesthood and the common people of the country against the pseudo-secular governments controlling Hindu temples and religious institutions.  If the governments do not take over thousands of churches and affiliated educational and medical institutions, then why do so with Hindu institutions? It is well known that many Christian organizations run education and medical trusts, and being a minority institution they are exempt from paying taxes and land up making a lot of money. These institutions also have reserved seats for people from their communities, and even top colleges such as St Stephens College and Delhi University carry out this practice. Similarly, there are Madrasas and universities run by Muslims, and in their case, the government even gives funds to these institutions. When simplified, this looks like the government is taking money from a Hindu religious institution and giving it to Muslim or Christian institutions.

Shocking! “Chidambaram made my life hell”, alleges ED officer in a letter