Since independence, Hindu religious institutions are gradually being taken over by the state government to control their resources. The management boards which control temples are mostly headed by some ‘esteemed academician’ who doesn’t even believe in God or doubts the existence of one. The priests are not allowed to interfere in the management of temples, and finally getting fed up these corrupt left-leaning board managers, some priests have started to speak out against them.

The latest one to join the band is Tirumala temple head priest AV Ramana Dikshitulu. In a press conference in Chennai, Mr. Dikshitulu said “It’s unfortunate that we (hereditary priests), who for generations dedicated ourselves to temple service, are so helpless today. Until 1996, we were custodians of the Lord’s jewelry and maintained up-to-date records of the inventory. But, in the 22 years since Andhra government took over the reins, not once has the jewelry count been done. Of late, only the newer jewelry is given to adorn the Lord. What happened to the ancient ornaments? An open audit should be done. Digital records should be made for transparency.” He also demanded a high-level CBI inquiry into how the funds of the temple are being used. Tirumala temple is situated on the southern border of coastal Andhra Pradesh, 138 km from Chennai. The temple is visited by 50 thousand to 1 lakh people daily, making it one of the most visited holy place in the world. It is also the richest temple in the world in terms of donations received and wealth.  The Temple is dedicated to Lord Sri Venkateswara, an incarnation of Vishnu, who is believed to have appeared here to save mankind from trials and troubles of Kali Yuga.

In the name of secularism, successive governments have taken control of Hindu religious institutions. They control the religious rituals carried out in temples, decide who will be appointed as the chief Pujari of the temple, manage their finances and even tax the income of Hindu temples. This seems similar to the Mughal period when “jizya” (a special tax paid by Non-Muslims to Muslim rulers) was paid by Hindus. The temple boards have completely commercialized the operations of the temple with arrangements such as VIP darshan and shortening of the rituals. They are running temple like a corporate house to maximize the profits for themselves and government, the faith of devotees is hurt due to commercialization. The head priest of Tirumala temple warned that “The authorities have no respect for traditions or practices as laid down by agamas (Vedic scriptures defining traditions and rituals in the temple). This would result in devotees losing faith and lead to catastrophic incidents.” 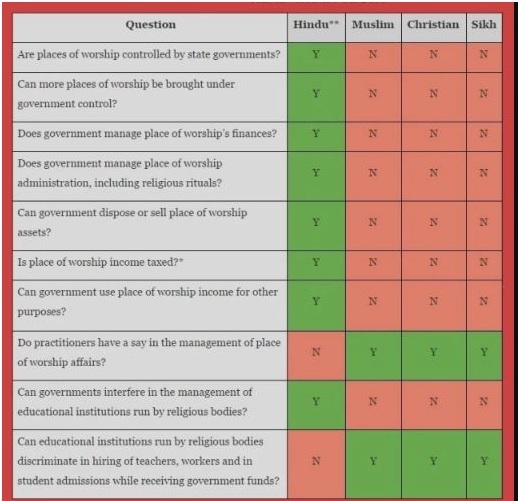 Hindu temples are facing an assault from “secular” state governments all across the country. These governments, under various Hindu Religious and Charitable Endowments (HRCE) Acts, control our temples and religious institutions and violate the constitutional rights of Hindus.

The 45-year-old hereditary priest of Venkateswara temple in Tirumala said in a press conference how his privileges were being snatched away and he was put under a lot of hardship.   He asked the lakhs of devotees of the temple to agitate and protect the sanctity of the shrine. His lawyer has also sent a detailed representation to the Prime Minister and the President. Andhra Pradesh Chief Minister N Chandrababu Naidu has asked the Endowment Department of Andhra Pradesh to auction the land of Hindu temples and religious institutions that it controls for constructing homes for poor. The Andhra government under its flagship program had promised to build 19 lakh homes for the poor in rural as well as urban areas, but the major problem the state faces is a shortage of land for these homes. Chandrababu Naidu wants to encroach upon the land of Hindu temples and wrongfully appropriate it to fulfill his promises.  Building homes for the poor is a noble initiative but snatching land away from Hindu institutions can not be justified. This kind of attack on Hindu religious institutions must stop immediately and their temples should be left to themselves rather than under government control.

Jharkhand, March 2005: “Decoy to save Democracy Against Tyranny”