Sorry Dear Bengalis you didn’t win the Rosogolla War. The Game is still on

Rasogolla- one of the sweetest sweetmeats in India has been the center of a long-living tussle between the two neighbouring states- Odisha and West Bengal. Both the states had been claiming the origin of Rasogolla since a century.

Recently, West Bengal got Geographical Indication tag of Rasogolla and many netizens claimed it as a victory of West Bengal over Odisha. The internet was hit with the headlines- “Revenge is sweet: West Bengal defeated Odisha”.

Famous confectioner from Bengal Mr. Nabin Chandra Das was looking for a break from Sandesh, which has a dry and hard texture, to create something soft, succulent and sweet. In his pursuit of innovation of a new sweet, he carried out experiments and ultimately in 1868, came up with what we know today as Rasogolla– the white, round and spongy sweets dipped in syrup. NBD made Rasogollas by boiling a rounded mix of chhena and semolina in sugar syrup. In 1930, Nabin’s son Krishna Chandra Das introduced vacuum packing to keep the sweets fresher for longer. Some eminent historians say that the Portuguese introduced the recipe of milk curdling, which resulted into chhena becoming popular in the Indian subcontinent and so, it was not possible that Rasogolla existed before that.

However, the untold history says something different. Puri, the land of Lord Jagannath is one of the most revered shrines in Hinduism for being one of the four Vishnu Dhams. Back in the 11th century CE, the priests of Jagannath temple invented a special sweet as a tribute to Lord Jagannath. Because it was innovated as a tribute to Jagannath’s big and round eyes, the sweet was almost white, big and elliptical-shaped instead of being a perfect sphere. Perhaps, that is the reason why the modern version of the sweet is bigger in size than the “Banglar Rasogollas”. Dipped in sweet syrup, the sweet was called Khira Mohana back in 11th century CE.

Leaving Maa Lakshmi behind in Jagannath temple, Lord Jagannath, Balabhadra and Devi Subhadra visit Gundicha temple every year during Rathyatra. This makes the Goddess angry. Goddess Lakshmi does not open the door for her husband when he returns from the trip. Since brother cannot enter temple, how can Balabhadra and Subhadra enter the temple leaving Jagannath behind? The three siblings stay outside. Lord Jagannath diffuses Maa Lakshmi’s anger by offering her Khira Mohana. Due to this, Goddess Lakshmi finally relents and agrees to let the Lord in. This ritual is known as Niladri Bije. During 11th century, the temple priests used to keep their recipes well guarded and the common people were unaware of the recipe. Centuries later, this sweet became one of the most famous sweets available all-over Odisha due to one of the priests of Jagannath. 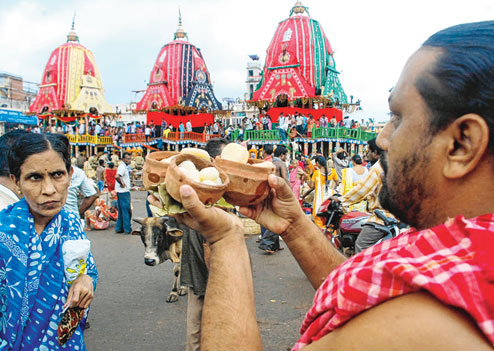 Folklore of Puri tells us about the ancient village of Pahala, which had a large number of cows due to Lord Krishna’s association with the holy bovine. Due to Lord’s blessings, even after feeding the calves, consuming the milk themselves, making sweets and food-dishes out of it, etc. the locals were always left with excess milk at the end of the day. Since milk gets spoiled, they used to throw away the excess milk. When a priest of Jagannath temple saw the wastage, he shared the secret art of milk curdling with the locals and taught them the art of making Khira Mohana. Now that they could use the excess milk as chhena, they could create the sweet. That was the first time when the sweet went beyond the premise of the temple and the common-man could prepare and consume it as a commercial sweet. This, among the common mass of Odisha, became famous as Rasagola (not Rasogolla). Since the first appearance of the commercial sweet took place at the village of Pahala, the sweet is often referred as Pahala Rasagola. In modern day, the largest and most famous hubs of Rasagola are in Pahala and Salepur in Odisha. Bikalananda Kar from Salepur revolutionized the Rasagola industry in Odisha.

But, since Indian historians and educated mass do not trust folklores to have traces of history, let us observe a more documented evidence. Prataparudra Deva (1497 to 1540 A.D) was the last Gajapati emperor of the Suryabanshi Dynasty, which was founded by King Kapilendra Deva Routray. During Prataparudra’s reign, Balaram Das was one of the five poets known as Panchsakhas (Five Friends). He composed the Odia Ramayan called Jagamohan Ramayan aka Dandee Ramayan. Balaram Das mentioned numerous local food-items and cultural practices in the Ramayan. This Ramayan had ample descriptions of chhena and chhena products in it. Pundit Govinda Rath, born in 1848, was the first scholar to edit and publish it. The Ajodhya Kanda of the Dandee Ramayana narrates the incident where Sage Bharadwaj served Bharat and Shatrughna some foods and delicacies when they went to bring Rama back from exile. The foods included dudha chhena (cottage cheese prepared from milk), chhena puri, chhena ladu, rasagola, and rasabali.

Bijay Chandra Majumdar’s book called “Typical Selections from Odia Literature” contains numerous excerpts from Dandee Ramayan. On page number 84 of the excerpts, the word “Rasagola” is clearly mentioned. The book was published by Calcutta University in 1921. 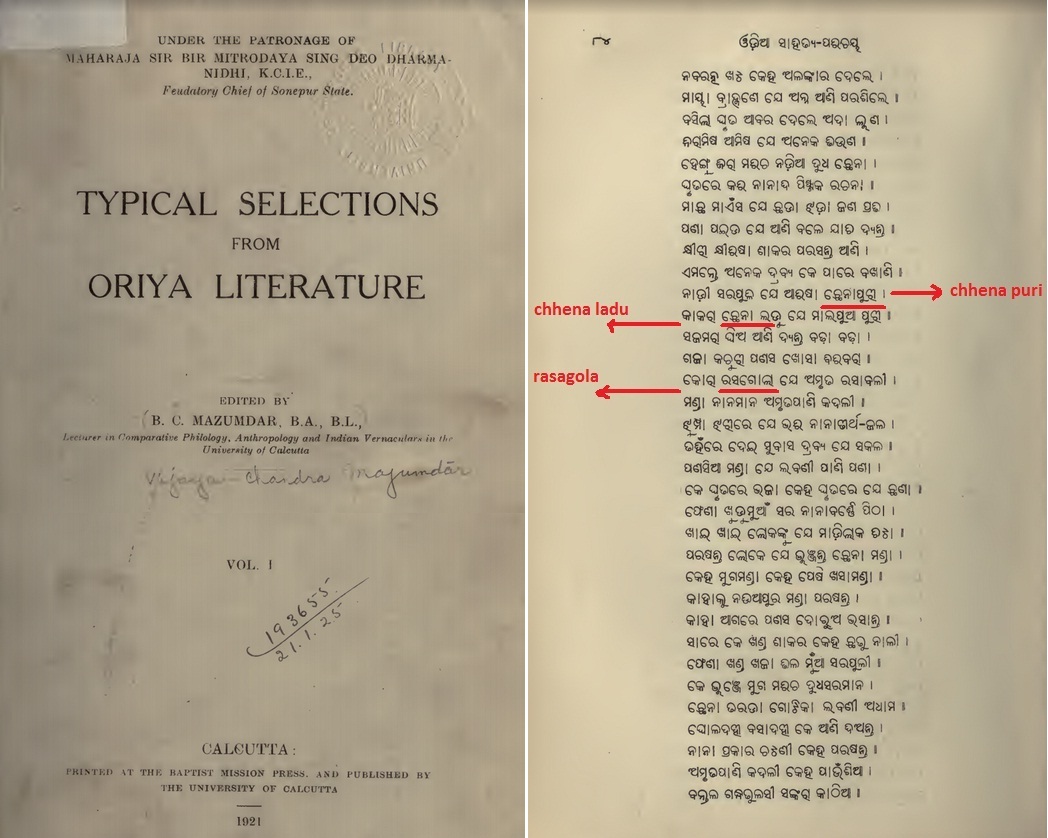 Apart from Dandee Ramayan, the temple chronicle called Madala Panji also mentions about Rasogolla back into 11th century. The history clearly proves that Rasagola originated in Odisha. In simple words, the Banglar Rasogolla is different while Odia Rasagola is the original one- just like Udupi Dose was first to come into existence and later Dosa became famous across South India. The Odia interest was to get the recognition as the origin of Rasagola, not the GI tag of some variant. In June 2015, Minister Pradip Kumar Panigrahi formed a committee to trace back to Rasagola’s origin. The West Bengal government was quick to respond and they formed committee and the Directorate of Food Processing Industries, West Bengal had applied for the GI tag of Banglar Rasogolla and not generic Rasagola. The details of the GI tag mention the item as Banglar Rasogolla. So, West Bengal won the GI tag of their version of Rasogolla not the 900-year old battle of custody of Rasagola. Odisha did not even apply for Banglar Rasogolla, so there is no question of its defeat. 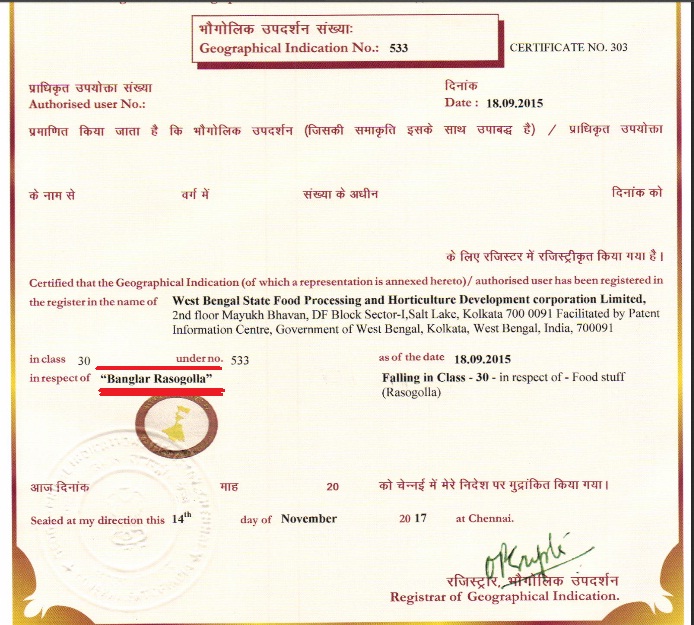 The misinformation about Odisha’s defeat was probably spread due to the tweet from CM of West Bengal Mamata Banerjee who mentioned Rosogolla instead of Banglar Rosogolla.

Sweet news for us all. We are very happy and proud that #Bengal has been granted GI ( Geographical Indication) status for Rosogolla

The CMO of Odisha has officially announced that the state will be applying for 800-year old Odisha Rasagola.

Odisha Government is in process of obtaining GI tag for Odishara Rasagolla. It originated in #Odisha and is offered at Jagannath Temple as part of religious rituals by people of Odisha since centuries. pic.twitter.com/zk0tOAxj7c

Seems like the battle isn’t over yet. Instead, it just became interesting.

To end the discussion with, cheese existed in India long before the Portuguese came. According to the book Technology of Indian Milk Products, texts from the Kushan period mention “the use of solid portion from the mixture of warm milk and curds” to feed warriors, while the thin liquid (whey) would be distributed among the poor people.

Tipu Sultan was Born on 20th Nov 1750. His Jayanti is Celebrated on 10th Nov. The Reason is Disturbing

Moody’s Ratings Upgrade for India: The Most Comprehensive Analysis on the Internet