Moody’s Ratings Upgrade for India: The Most Comprehensive Analysis on the Internet

by Nitiksh Srivastava
in Economy
0

So it happened – India was finally upgraded by Moody’s and (almost) everyone rejoiced. Some thought it to be a validation of the steps Modi govt has taken wrt the economy , while some thought it is a good news for their stock market investments and few good men went after Tom Moody.

Moody’s along with Standard & poor and Fitch are the three major rating agencies in the world and they combined rate over 95% of all the bonds and fixed-income instruments. It is a very strong oligopoly something even the biggest regulators have not been able to breach.

While their reputation took a beating post the 2008 subprime crisis, their opinion still matters.  It is not uncommon for fixed-income desks across the world to buy and sell bonds worth billions of dollars just on the basis on its rating by these agencies. This is Reuters articles captures the confidence these agencies’ rating provide beautifully. 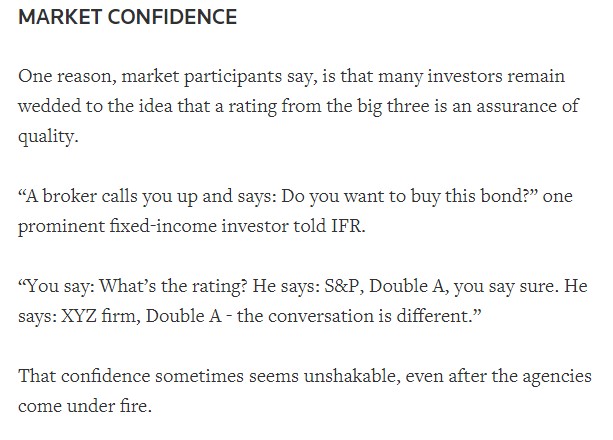 It is fair to say that their opinion on any kind of debt security is the final word on how the various market participants are going to receive that particular debt security.

The full copy of the report is by subscription only, however the press release by Moody’s provide a good snapshot of the rationale the possible action in future.

You can find the full scale of Moody’s rating here

From the press release, we see there were few other upgrades and not just the over Baa3 to Baa2. There were upgrades to India’s foreign currency bonds, bank deposits, and bank deposit ceiling too.

The outlook was changed from positive to stable which is often the case when ratings are upgraded. Ideally the next step will be change in outlook to either positive or negative depending on how the government’s finances behave over the next few years.

Currently, with the stable outlook Moody’s is on a wait and watch mode with Baa2 rating. This wait and watch mode is evident from the commentary where Moody’s appreciates Government of India’s steps on tackling the structural issues such as GST, DeMo, Aadhar, DBT et al and is waiting for those steps to bear fruits.

“Key elements of the reform program include the recently-introduced Goods and Services Tax (GST) which will, among other things, promote productivity by removing barriers to interstate trade; improvements to the monetary policy framework; measures to address the overhang of non-performing loans (NPLs) in the banking system; and measures such as demonetization, the Aadhaar system of biometric accounts and targeted delivery of benefits through the Direct Benefit Transfer (DBT) system intended to reduce informality in the economy. Other important measures which have yet to reach fruition include planned land and labor market reforms, which rely to a great extent on cooperation with and between the States.

Most of these measures will take time for their impact to be seen, and some, such as the GST and demonetization, have undermined growth over the near term.

Government efforts to reduce corruption, formalize economic activity and improve tax collection and administration, including through demonetization and GST, both illustrate and should contribute to the further strengthening of India’s institutions. On the fiscal front, efforts to improve transparency and accountability, including through adoption of a new Fiscal Responsibility and Budget Management (FRBM) Act, are expected to enhance India’s fiscal policy framework and strengthen policy credibility.

Adoption of a flexible inflation targeting regime and the formation of a Monetary Policy Committee (MPC) have already enhanced the transparency and efficiency of monetary policy in India. Inflation has declined markedly and foreign exchange reserves have increased to all-time highs, creating significant policy buffers to absorb potential shocks.”

As the synopsis shows, Moody’s acknowledges the current slowdown in the growth but also acknowledges that these steps taken by the Government will bear fruits in future.

“Moody’s expects real GDP growth to moderate to 6.7% in the fiscal year ending in March 2018 (FY2017). However, as disruption fades, assisted by recent government measures to support SMEs and exporters with GST compliance, real GDP growth will rise to 7.5% in FY2018, with similarly robust levels of growth from FY2019 onward. Longer term, India’s growth potential is significantly higher than most other Baa-rated sovereigns”

Overall, this commentary is music to any investor who is wondering where to park his money. It will not be surprising if the FIIs and FDI numbers start to pick in the next quarter or so.

Now the most important question – What will this rating upgrade do for me?

Ease of doing business, Performance (and recent resilience) of Indian stock market, GST, and now rating upgrade are great selling points. These will appear in every single presentation and in very document that will be written by the like of Goldman Sachs, Morgan Stanley, E&Y, KPMG, et al.

These parameters will make India a more preferred destination for the capital to move in.

Government of India bond yields are at 7.0% as of today. It fell 0.21% on Friday after this news broke out. The higher rating will keep the yields low which will mean the government will be able to borrow more at a lower cost. This will also help RBI manage the government’s finances.

As we enter 2018, the country will get into the election mode and recent events such as farmer loan waiver will gain more steam. Lower bond yields will give Modi more space to borrow and throw money (effectively making his re-election easier).

No analysis of rating upgrade is possible without talking about its impact on the banks. Banks are different from other industries as their balance sheet is way more important than their cash flow and income statement. Banks hold a significant amount of their assets as HTM – “Hold To Maturity”. These assets form tier 2 capital of the banks and are critical part of their remaining solvent. A strong banking system is the pre-requisite of an economic expansion.

As bond yields fall, the value of bonds in HIM category will rise. As HIM value rises, banks balance sheet will start to look better and they will have to keep lower provisions for the NPAs.

The total provisions for NPAs by India’s largest bank (SBI) is INR121 Billion. Add the provisions by PNB, IOC, and other PSBs the figure will be mind-bobbling. The total bank recapitalization planned is USD32 billion . Any small move in HIM values on the bank’s balance sheet will lead to mega savings for both the banks and govt.

As bond yields fall, the stock prices will be re-rated. Expect the market to incorporate this re-rating in next 6-9 months. The big bull Rakesh Jhunjhunwala is already going gaga over this.

IT companies and Oil prices:

Not good news for IT companies. Higher rating means stronger INR and that is not exactly the news IT companies would have wanted to hear.

Stronger INR will mean buying crude oil will remain cheaper for India. Not sure how of the benefits will be passed onto the public though. But with the 2018 assembly elections and 2019 LS elections, you never know J

If I can borrow the phrase from the Wall Street, this rating upgrade of India is early Christmas for the country and Modi.  India will now be considered a little less risk which is a great news considering major economies have been recently downgraded by the same set of agencies – China and UK.

Trust Modi and India Inc to sell rating upgrade and ease of doing business ranking across the world to attract more capital – both into the stock market as FII and into physical infra as FDI. Unless Modi government completely throws the fiscal discipline out of the window prior to 2019 election, this rating upgrade is an event that will change India and the lives of Indian in a huge way over the next few years.

Sorry Dear Bengalis you didn’t win the Rosogolla War. The Game is still on