Kumar Vishwas was a Misfit in the Aam Aadmi Party, He is all set to be Ousted now!

by Radhe Jha
in Opinions
0

The decision of the Aam Aadmi Party (AAP) to offer nominations for Rajya Sabha seats to ‘outsiders’ instead of party members has not gone down too well with senior leader Kumar Vishwas who had openly expressed his ambition to be one of the choices for the three Rajya Sabha seats from Delhi. Also, reinstatement of Okhla MLA Amanatullah Khan has further widened the rift between Kumar Vishwas and AAP senior leaders.

It is quite understandable that when political party comes out openly to refute any dispute or resentment among the party leaders, that simply reflects that there is something brewing in and has to be reconciled.  If there is conflict between two popular leaders and happens to be way too big to resolve, then either they split the party or one has to leave or get thrown out. In the case of Aam Aadmi Party, it is conspicuous that it is one man show run by Arvind Kejriwal and there is no space for any contrary views. We have seen it in the case of Prashant Bhushan and Yogendra Yadav, one may argue though in favour of removal but it was very unfortunate the way they were manhandled and kicked out, especially for the party that masquerades as champion of freedom of expression.

There are series of events that strongly suggest that Kumar Vishwas is no more desirable or fits in current set up prevailing in the party. We may categorise it into two aspects. Firstly, Kumar Vishwas has never been in resonance with the politics his party indulges in, hence has to quit or will be shown exit door in near future. Secondly, there is ample evidence that suggests, a faction of the party is hatching conspiracy against him to make him quit or oust him and needless to mention that it cannot be executed without the consent of senior leaders sitting on higher ranks in the party.

Now let’s discuss the first aspect depicting that Kumar Vishwas has never been in support of Kejriwal style of politics and is misfit in Aam Aadmi Party.

Now, let’s see the second aspect that there is factionalism growing within the party and they are continuously trying to sideline Kumar Vishwas. In recent times there have been deliberate attempts to gag the leader Kumar Vishwas and  personal accusations hurled against him that clearly indicates that Party has divided into two camps one is Kejriwal camp that is calling the shots and other is Kumar Vishwas camp who is at receiving end but still believes he is a star campaigner and has mass appeal.

But later MLA Amanatullah Khan was reinstated into party and also included on crucial panels of the Delhi Legislative Assembly. Moreover, Kejriwal attended an iftar party organised by Khan, which was seen as a clear snub to Vishwas.

In a tweet, Mr. Pandey questioned Mr. Vishwas over his comments attacking Congress’s Sandeep Dikshit for criticising Army chief General Bipin Rawat, but choosing not to comment on Ms. Raje.

“Brother, you launch fervent attacks on the Congress but (you) say that you will not attack Vasundhara (Raje). Why?” Mr. Pandey’s tweet read. It came a day after Mr. Vishwas said that he would attack the BJP government in Rajasthan, but not make any comments on Ms. Raje’s personal life. Mr. Pandey, former convener of the AAP’s Delhi unit, however, said his comment was being taken out of context. “I think everybody is unnecessarily over-reading my tweet,” he said. But till then the damage was done and reality surfaced few months later when posters calling Kumar Vishwas ‘traitor’ and ‘a friend of BJP’ had been put up outside AAP’s Rouse Avenue office in Delhi. 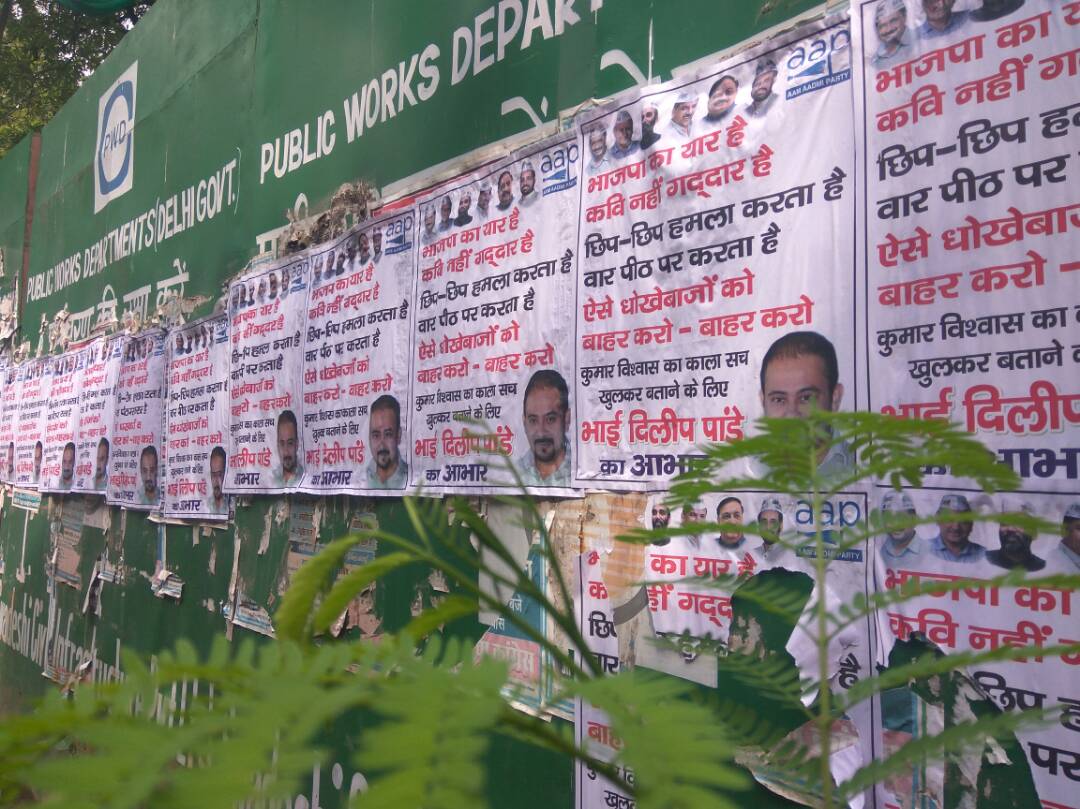 Vishwas has been at odds with the party ever since he questioned the leadership over a string of defeats, especially after its poor performance in Punjab and Goa, the Rajouri Garden by-poll, and the drubbing in the civic body election. But the matter of fact is Kumar Vishwas has been vocal and critic since the party came into existence but what is so different this year that so many  personal attacks and slanderous remarks were made against him. Is it resentment growing aginst Kumar Vishwas in the party or it is well orchestrated and someone from behind is pulling the strings? But in both the cases, what choices he has now ? It cannot hold too long if the same situation persists and then he has to make a decision. The way Kejriwal and its associates have command and stronghold over party, possibility of splitting the party is out of window. Kumar Vishwas may have followers but AAP party has reduced to just one man’s affair and it is Arvind Kejriwal.

Hence, only two options are viable at this point of time in a backdrop that he has to leave the party sooner or later. First is to quit AAP and join BJP as he is politically very ambitious and he can be a strategic asset for BJP in terms of capitalising his stardom and putting him against Kejriwal. Therefore, he may go up into ladder very quickly. It is more likely to happen, I reckon and if it happens it will be a great blow to Aam Aadmi Party that has been mired into controversies one after another (Kapil Mishra is still haunting them).

Second, is to leave AAP and turn apolitical. As Kumar Vishwas is a  renowned poet and very famous among youths. His contribution in Hindi literature especially in reviving Hindi poetry and  making it popular among masses is incredible and widely acknowledged.

Someone may argue that he can go and  join Swaraj India  (political party founded by expelled AAP leader Yogendra Yadav and Prashant Bhushan) but chances are very bleak, on analysing  his past relations between them and his stand on their removal.

Other way around, what happen if Kumar Vishwas doesn’t quit and gracefully digest the humiliation though it doesn’t seem to occur, going by belligerent attitude of Kumar Vishwas and his track record but for argument sake if ? Let’s see.

He has made Rajasthan in chief after Amanatullah Khan’s controversy to placate him but his organizational capacity is still to be tested as he has largely been a star campaigner. The assignment in Rajasthan is an opportunity for him to show his organizational skills but unfortunately the way AAP has performed in recent elections, the fate of party in 2018 legislative assembly election of Rajasthan is very gloomy. Also, AAP does not stand anywhere in Rajasthan and fight is between Congress and BJP. No wonder, Kumar Vishwas will be made scapegoat if AAP’s dismal performance continues and that aggrieved and hostile faction within the party will leave no stone unturned to kick him out. So, Kumar Vishwas’s political future is full of uncertainty atleast for now.

From party’s point of view, Vishwas’ exit or removal in current phase that party is going through will prove to be a disaster. It will leave party workers in disarray, demotivated and  disgruntled after seeing the removal of founding members one after another. Still there is time, it can be resolved and things may bring back to normal but unfortunately determination seems to be lacking among senior leaders and it clearly suggests that a faction within the party is hell bent to kick him out and has full fledged support from top leaders. There is great possibility that they will succeed too. Kumar Vishwas’ facebook post reveals it all. 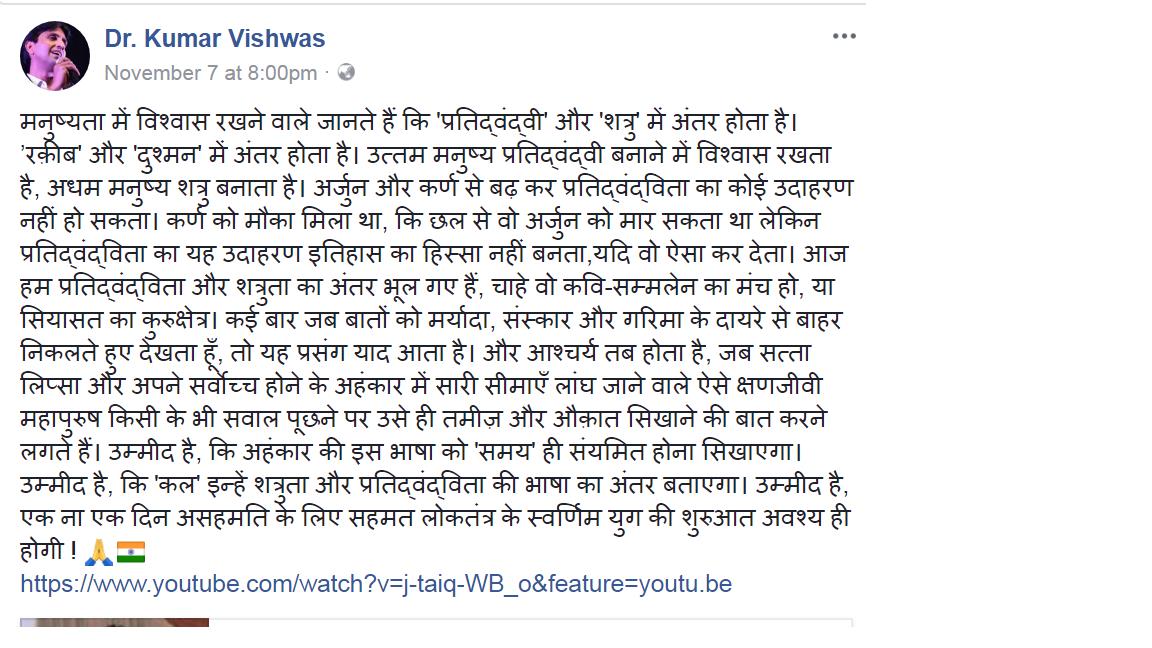 They Called it a Hindutva Hyperbole. Laughed at it. Now this Malice has assumed Gigantic Proportions

Whenever Chinese Media brings up 1962, Ask them about Doklam!